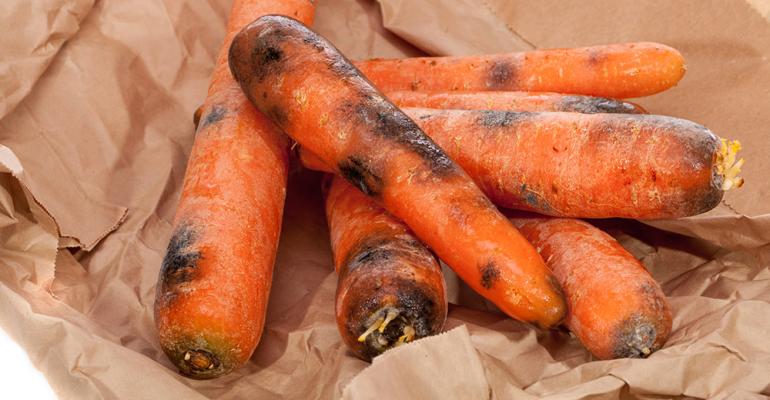 Grocery retailers in the United States could be doing more to address the issue of food waste, a new study contends.

Of the 10 largest grocery companies based in the U.S. or with U.S. stores, nine don’t publicly report their total volume of food waste, according to “Checked Out,” a report released yesterday by the Center for Biological Diversity and the Ugly Fruit and Veg Campaign. Ahold Delhaize was the only one of the 10 companies — which also included Albertsons Cos., Aldi, Costco, Kroger, Publix, Target, Trader Joe’s, Walmart and Whole Foods Markets — that publicly reported this data. Forty percent of the food produced in the U.S. goes to waste, and businesses serving or selling food account for 40% of that total, the report said. The chief culprit: retailers, which generate more waste than restaurants or foodservice providers, the study noted.

“Food waste is a growing problem that squanders water and farmland, hurting wildlife and putting food security at risk. We can stop this massive waste, but only if supermarkets are part of the solution,” Jennifer Molidor, senior food campaigner at the Center for Biological Diversity, an Oakland, Calif.-based nonprofit conservation group, said in a statement.

Other key findings in the study include the following:

• The four retailers with a C grade or higher were the only ones with specific food waste reduction commitments. Kroger leads the field with a goal of zero food waste by 2025;

• Four of the 10 companies have no imperfect-produce initiatives, which can help prevent the waste of imperfect fruits and vegetables;

• Walmart was the only retailer with a range of clear, in-store efforts to cut food waste, including improving store fixtures, standardizing date labels, and educating employees and shoppers; and

• All of the companies have food donation programs, with most operating companywide. Aldi was the only company not reporting a food recycling program, such as composting, animal feed or other industrial uses.

“As the primary place where most Americans purchase food, supermarkets influence what makes it from farms to shelves, what happens to unsold food and even how much and what types of food shoppers buy,” the Checked Out report stated.

“Although all the large grocery retailers in the United States have programs to donate surplus food, we found that the sector as a whole is doing very little to prevent food waste from the start,” according to the study. “With few exceptions, they have failed to take even the first step toward accountability by committing to address food waste and tracking their food waste to understand better how it can be reduced.”

Retailers also are urged to leverage emerging technology with real-time analytics to better track temperatures and conditions of perishables and to engage in online and in-store initiatives to rein in overpurchasing, such as terminating buy-one-get-one-free models and providing meal-planning tools.

“Customers have taken notice of the massive problem of wasted food and want businesses to take responsibility and action,” commented Jordan Figueiredo, creator of the Ugly Fruit and Veg Campaign, which focuses on reducing produce waste. “That’s why we’re calling on American supermarkets to do their part and commit to eliminating food waste by 2025. Eliminating food waste in the grocery sector could have a ripple effect across society that could help address hunger, save money and protect the environment.”