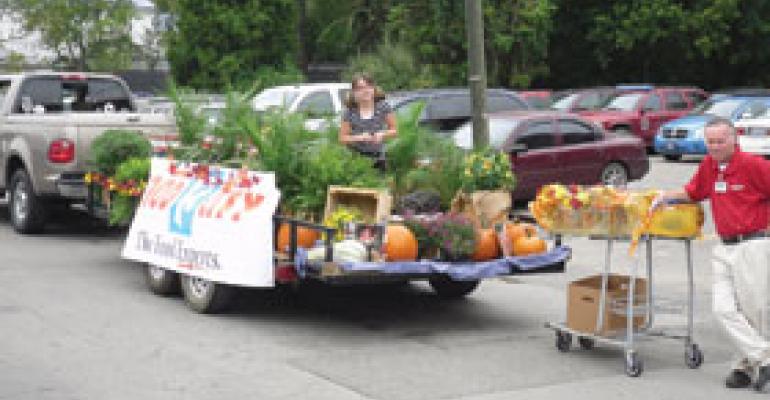 They pushed grocery carts bearing Food City's logo and made sure every kid they saw along the way was given an apple or Apple Bites.

The parade kicked off on a recent Saturday morning with high school bands, floats, the Lawrence County football team and cheerleaders, homecoming king and queen, county and city officials and candidates running for local office.

“This parade is a big deal for our town, since it's the only event that's county-wide and held here,” Perry said.

“Our warehouse sent us over 10 or 12 cases of apples and Fresh Express donated 300 packages of Apple Bites for us go give out.”

This was the second year in a row that Food City gave away apples at SeptemberFest. Even before the parade, Food City's customers looked forward to seeing the store's associates there giving out treats to the parade watchers, Perry said.

“Customers in the store that morning were wanting to know if we were going to be in the parade again. They said they liked it that we were giving away healthy snacks, instead of candy.”

The K-VA-T-owned Food City store here usually gets involved in whatever community event is going on. If there isn't one happening, Perry and Gowan are apt to create one, in the community or in-store.

The next in-store event Perry and Gowan have planned is their annual costume contest just before Halloween. The community events give Food City exposure, but the in-store Halloween and holiday events bring people into the store's produce department, Perry said.

Just before school started, as part of the community's back-to-school Ready Fest, Perry and other associates went to three different elementary schools. At one, they gave out pens, pencils and notebooks. At another, the giveaway was apples. But in one low-income, high-unemployment area, the back-to-school giveaway, from a Food City/Pepsi bannered vehicle, was lunch — a hot dog, chips and a Pepsi.