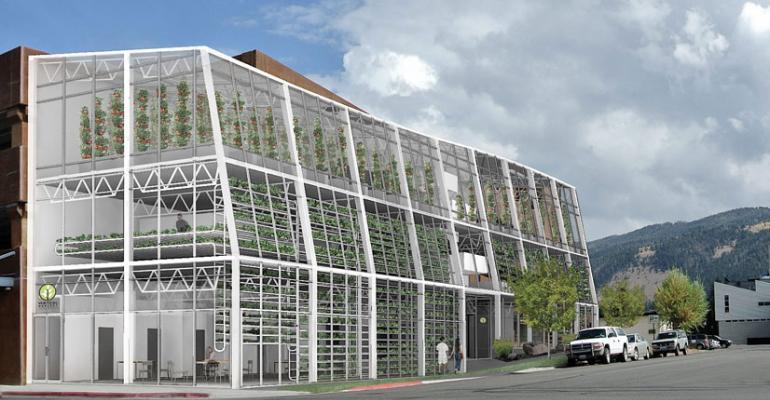 <p> A rendering of a planned Venture Harvest greenhouse in Wyoming.</p>

&ldquo;Retailers here like to source local food, but they have a hard time getting it consistently and keeping it on the shelves.&rdquo; &mdash; Penny McBride, Vertical Harvest, Jackson Hole, Wyo.

If all goes according to plan, Penny McBride’s new farming venture will be up and running sometime late next year, growing hundreds of pounds of tomatoes, lettuce, strawberries and microgreens each week for retailers in and around Jackson Hole, Wyo. It’s a major undertaking, and one that will help feed the area’s growing demand for local food.

And it’ll all happen on a tiny swath of land next to a parking garage.

How is this possible? Like many eco-minded entrepreneurs, McBride sees an opportunity in small-scale agriculture that utilizes technology and the latest in hydroponic farming methods to produce fresh, locally grown produce in the most efficient way possible. In towns and cities across the country, on rooftops and in multi-story greenhouses, such ventures are taking root and redefining what “locally grown” can mean.

Hardly the pastoral setting typically associated with local agriculture, the building McBride’s company, Vertical Harvest, will be housed in encompasses three stories of growing space and includes rotating carousels, LED lights, rows of hanging tomato vines, and a complex water circulation system — all designed to give crops optimal exposure to light and nutrients. All told, the growing process will use 90% less water and none of the herbicides and pesticides employed in traditional agriculture.

Vertical Harvest’s produce will also be available year-round — something retailers will surely appreciate during the frigid Wyoming winters.

“Retailers here like to source local food, but they have a hard time getting it consistently and keeping it on the shelves,” said McBride.

In Chicago, vertical farms have begun supplying restaurants and supermarkets throughout the city. The largest of these, FarmedHere, operates out of a once-vacant warehouse in Bedford Park, where it grows and packages salad greens that get distributed to retailers like Whole Foods Market, Standard Market and Green Grocer Chicago. FarmedHere produces arugula through a process called aeroponics that douses plant roots with a nutrient-rich mist. The company grows four varieties of basil, meanwhile, using water that’s circulated through a tank stocked with tilapia, whose nutrient-rich waste feeds the plants — a technique known as aquaponics.

A 5.5-ounce box of FarmedHere organic arugula retails for $4.99, which is 50 to 75 cents more than the imported organic variety. The higher price, says CEO Jolanta Hardej, is justified by the product’s freshness.

“We harvest one day and deliver to stores the next day,” she recently told Architectural Record. “Produce coming from California or Mexico may have traveled three days.”

Such practices offer a truly local product for urban consumers, who have typically relied on produce trucked in from outlying farms. Like FarmedHere, Local Garden in Vancouver, British Columbia, only sells its produce to retailers within the city limits. Situated on the roof of a parking garage in the heart of downtown, Local Garden — owned by clean-tech firm Alterrus — grows up to 3,500 pounds of fresh kale, arugula, basil and its own “Rooftop Blend” of salad greens each week. Growing produce in trays stacked 12 high and rotated through a system of conveyor belts, the company produces 5 acres worth of greens in a space that’s just under 6,000 square feet.

Local Garden offers produce year-round. And short travel times between the greenhouse and the store mean the company can restock grocery stores at a moment’s notice.

Similar models have cropped up in Memphis, New York and Montreal, as well as overseas in countries like South Korea, Japan and the Netherlands. One of the fastest-growing firms, BrightFarms, operates greenhouses in Pennsylvania and Brooklyn, with plans to build future locations in St. Louis, Oklahoma City and St. Paul, Minn. BrightFarms’ business model involves partnering with area retailers like Schnucks and A&P, who agree to source the company’s produce throughout the year. This summer, BrightFarms announced plans to build two 100,000-square-foot greenhouses, one in Indianapolis and the other in Washington, D.C. The Indianapolis greenhouse will exclusively source Marsh Supermarkets, BrightFarms announced last week.

Some retailers are bringing urban agriculture even closer to home. In San Francisco, local food pioneer Bi-Rite operates a rooftop garden that provides everything from broccoli to artichokes and honey for the store below. This spring, Whole Foods announced plans to build a 20,000-square-foot greenhouse atop its soon-to-open location in Brooklyn’s Gowanus neighborhood. The project, which will employ the expertise of local supplier Gotham Greens, is expected to provide produce for that store as well as Whole Food’s other New York City locations.

Last year, Thibodaux, La.-based Rouses opened an aeroponic garden atop its downtown New Orleans location. The project, which the retailer refers to as “Roots on the Rooftop,” provides parsley, cilantro, basil and other greens that are packaged and sold in the store.

“They saw how this could offer a better product for them as well as the environment, and that it could potentially be a money-saving venture,” said Kevin Morgan-Rothschild, co-founder of VertiFarm, the urban agriculture firm that built Rouses’ rooftop garden. “They saw this is the way the industry is moving.”

In North America, the number of green roof installations, which include rooftop gardens as well as installations designed to improve drainage and insulation, grew 24% between 2011 and 2012, according to the Toronto-based trade group Green Roofs for Healthy Cities. The city with the most new development during that time period was Washington, D.C., with more than one million square feet of space devoted to green rooftops — a finding that reflects the city’s eco-friendly business incentives, according to the group’s annual survey.

Paul Erlichman, a spokesman for Green Roofs for Healthy Cities, said tax credits, matching funds and other policies are helping to take the sting out of the up-front investment that green rooftops require. At the same time, he noted that retailers are coming around to the long-term savings these projects offer. Erlichman estimated that, depending on its size, a rooftop garden can earn back its initial investment in anywhere from 5 to 25 years.

“Between the longevity, energy savings and storm water savings, you can end up making your money back quite quickly and start turning a profit,” he said.

In addition to high-tech vertical farms, Chicago is also looking closer to the ground for ways to source high-quality food. Earlier this year, Mayor Rahm Emanuel announced a program called Farmers for Chicago that will make five acres of city-owned property available for urban farming. Local groups like Growing Power and Growing Home, which already operate several small-scale farms around the city, will develop the land and train workers to grow, package and sell produce to local grocery stores and farmers’ markets.

It’s an initiative that “will take Chicago’s local food sector to the next level,” according to Erika Allen, executive director of Growing Power.

But it’s also an initiative that faces a fair share of hurdles. A report by environmental news site grist.org found that it costs $250,000 to prepare half an acre of city land for farming. The cost includes bringing in new soil, compost, fencing, and adding a reliable water supply.

Similarly, vertical farms and rooftop gardens face challenges that belie their local advantages. Dickson Despommier, author of “The Vertical Farm: Feeding the World in the 21st Century,” has said in a BBC editorial and on his website that urban greenhouses face enormous energy costs to keep plants like tomatoes warm and well lit throughout the year. Indeed, vertical farms in Milwaukee, Chicago and elsewhere have had to close recently because they couldn’t keep up with their bills.

In response, companies like FarmedHere are looking into alternative energy sources like solar, methane and wind power. Manufacturers in Japan and Germany have developed lighting systems that cost less and incorporate natural light.

McBride, meanwhile, is confident in her business plan. Having recently completed financing with a $1.5 million grant from the Wyoming Business Council, she’s gotten verbal commitments from retailers and restaurants throughout the region to carry Vertical Harvest produce.

“We’ve done a lot of work to understand pricing,” she said. “Right now everyone is really excited at this prospect of having another source for local produce.”

The leap from community gardens to high-tech vertical farms has been dramatic for cities and towns across America. But innovation won’t stop there. For a look at future developments, industry observers need only look to Europe, where many urban agriculture methods originated.

In Germany, where roughly 10% of roofs are green, an outfit called Efficient City Farming has designed a combination fish and vegetable farm using old shipping containers. Employing a technique known as aquaponic farming, the portable units circulate water between the containers, which hold around 75 fish, and a vegetable garden overhead, thus feeding both elements in a closed-loop system.

In the Netherlands, meanwhile, development has begun on a 4,000-acre outdoor supermarket that will grow and sell 170 different varieties of fruits and vegetables.

“The European market realized a long time ago that there’s only so much space available in towns and cities,” said Paul Erlichman, a spokesman for Green Roofs for Healthy Cities. “They’ve quickly built out some of these new technologies.”