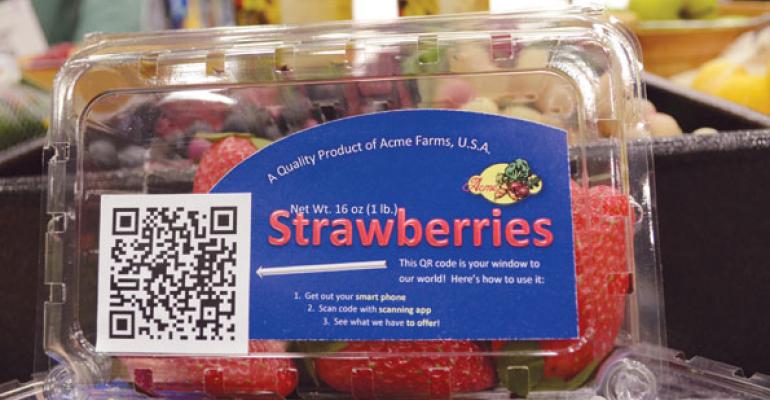 In produce, most items are sold in bulk, allowing shoppers to select each piece. So if it’s packaged, it’s likely they expect a full view of the contents. As a result, on-pack marketing messages are typically confined to a small space.

Despite this limitation, savvy suppliers have found strategic ways to place necessary communications on fruits and vegetables. Many use transparent labels ladled with nutrient content, recipes and sweepstakes information. A growing number of marketers are choosing to print website addresses and social media icons on packs, driving consumers to the virtual world where space is boundless. 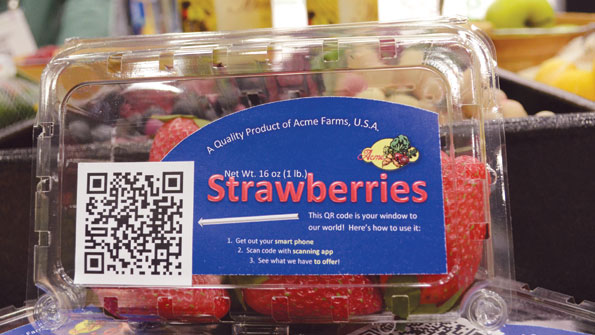 “Produce marketers have really been pushing the Internet with their on-pack marketing strategies in recent years,” said Randy Weck, produce manager, Orchard Market, a two-store supermarket based in Spring Lake, Mich. “We carry salads with on-pack QR codes that take shoppers directly to information about where the lettuce is grown.

“We also have Dole bananas with stickers that entice shoppers to go the website to learn how to turn the bananas into yonanas,” he added, referring to the frozen puree treat that has become a healthy dessert favorite.

In years past, Weck frequently saw small oval stickers on fruits with kid-friendly jokes and sayings intended to engage young consumers. Now, the stickers are larger, more rectangular and include nutrient content and information about the growers.

At Highland Park Market, an upscale chain based in Glastonbury, Conn., recipes and food pairings appear on many packs. So do the vital vitamins, minerals and specific health benefits of individual items.

“I’m starting to see more vitamin and nutrient information appearing on fruits and vegetables as shoppers become increasingly health conscious,” said Brian Gibbons, manager and produce director for the supermarket’s Farmington, Conn., location. “This works particularly well when there are vitamins in an item that people wouldn’t expect, like vitamin C, which can be found in broccoli and red peppers, not just oranges.”

An August 2011 report, “Consumer Attitudes Toward Packaged Fruits and Vegetables Produce Marketing,” released by the Produce Marketing Association, Newark, Del., revealed that shoppers are looking for such information on packages in produce.

The results of online surveys and in-store intercepts with shoppers by PMA show that healthy eating, health and nutrition are the top pieces of information shoppers would like to see on packaged produce labels. Specific comments made by people surveyed included the desire to know sodium content, use of additives or preservatives, calories per serving, and whether the produce is gluten-free.

More produce suppliers are including nutrient content on packaging than ever before, according to Lorna Christie, executive vice president and chief operating officer for PMA. They are also addressing consumers’ interest in carbon footprint tracking capabilities, she said.

“Some of the most innovative on-pack marketing campaigns in produce involve QR codes and websites with a connection to where the food was grown and who grew it, plus what vitamins and minerals are in the foods,” she said. “Produce marketers are also directing consumers to social media outlets like Facebook, Twitter and Foursquare where they can find a wealth of information about their products, recipes and more.”

The PMA study revealed that on-pack information is of particular importance on unique items in produce. The majority of shoppers surveyed said that they are more likely to choose packaged items over bulk when trying an unfamiliar item for the first time because the packaging labels contain information about the produce.

Many shoppers at Dorothy Lane Market, an independent supermarket chain based in Dayton, Ohio, ask produce manager Ron Williams about the flavor profile of certain fruits and vegetables. The more exotic or uncommon the produce, the more questions people tend to ask.

“A lot of people don’t know that a gala apple is very sweet, or what apples are best for baking,” said Williams. “Out of all produce items, pineapple marketers do the best job with big, bright tags that do everything from tell shoppers about the flavor to how to cut the fruit.”

Details like these are particularly important when trying to sell exotic produce. Calbaza squash, rambutan, Chinese eggplant, kiwano, Buddha’s hand, dragon fruit and mangosteen are just a few examples of unusual items that inspire a barrage of questions at Dorothy Lane.

However, some shoppers are wary of even the most familiar fruits and vegetables, added Williams.

He yields questions about how to tell when a cantaloupe is ripe and how to cut and use an avocado nearly every day.

“I would bet that most of the questions I get here are the same questions that produce managers all over the country are asked routinely,” he told SN. “Along with talking to shoppers, marketers would be wise to survey produce managers to learn the most common questions shoppers ask. Then, they could use that information to determine what to put into their on-packing marketing messages.”

The PMA study does offer valuable insight into shoppers’ purchase patterns. Twenty percent of shoppers surveyed online claimed that on-pack information about preparation would entice them to try unfamiliar foods. 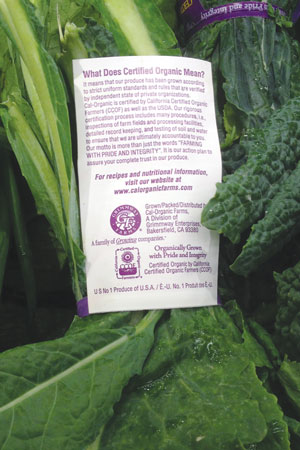 Without such proper consideration of consumer interest, marketing dollars and efforts may be wasted, said Robert Passikoff, president of New York-based Brand Keys.

Passikoff challenged the validity of many on-pack marketing attempts in produce. He cautioned marketers to carefully select the content and application of messaging going forward.

“A lot of money is spent without any clear sense of what the return on investment is,” said Passikoff. “Because the impact of marketing is nearly impossible to measure, finding a way to do that is crucial. Sending shoppers to websites using QR codes is one of the most direct ways to do this since it can be tracked.”

Once consumers are on a website or Facebook page, however, there must be something interesting there that is engaging enough to warrant the time and effort, he added.

Christie agreed, saying that many produce companies are answering this call to action with extensive websites specifically created for such shopper interaction.

“New technology like QR codes has created a fresh wave of websites in the industry that are very consumer friendly,” she said. “In the past, the retailer owned the relationship with the consumer. But now, the manufacturer or supplier can connect with shoppers personally, reminding them of who they are, what and how they grow and introducing new varieties directly to them.”

Tanimura & Antle, a Salinas, Calif.-based lettuce producer, is engaging shoppers online by offering a summer sweepstakes. Entrants must sign up on the company’s website.

The brand’s logo and product label also appear there, all printed atop a transparent sticker that allows for ample viewing of the product packaged inside.

Dole also offers plenty of see-through space on its Just Lettuce bags. Instead of a sweepstakes, the focus of its messaging is on pairing suggestions.

Just Lettuce iceberg bags tout the message, “Pairs well with Classic Louis Dressing, fresh crab and bay shrimp, sliced radishes, diced cucumber and sharp cheddar cheese.” There’s even information about the taste and texture of the lettuce on the front of each Just Lettuce pack.

According to PMA’s Christie, flavor profile is so important to shoppers, it’s inspiring yet another innovative on-pack marketing concept.

“One newer trend we’re seeing emerge is packaging that offers consumers the opportunity to see how ripe the product is in the store,” said Christie. “We’ve seen it on pears. There is a pear-ripening bar on the package that shows the bright red hue that the pears should match for peak ripeness.”

The PMA’s “Consumer Attitudes Toward Packaged Fruits and Vegetables Produce Marketing” report revealed that consumers want to inspect their packaged produce, just as they do bulk items. Further, the study showed that the inability to see and inspect the produce deters some shoppers from purchasing packaged produce.

This doesn’t mean that marketers shouldn’t stop marketing on packages in produce altogether, said Jim Wisner, president, Wisner Marketing Group, Libertyville, Ill. They simply need to make sure that there is enough see-through space after labels are put into place.

Wisner sees the opportunity for produce marketers to create cross-promotions using on-pack messaging. This would be especially effective if they partner with supermarkets that have private-label products in other departments, he said.

“Giant Eagle ran a cross-promotion a while back using its store brand of Cheerios and bananas from the produce section,” he said. “There’s much more room on a box of cereal to describe a promotion like this.”

PMA’s Christie recommends that marketers view packaging as more than a delivery vehicle.

“It is a touch point for conveying messages about a product,” she said.