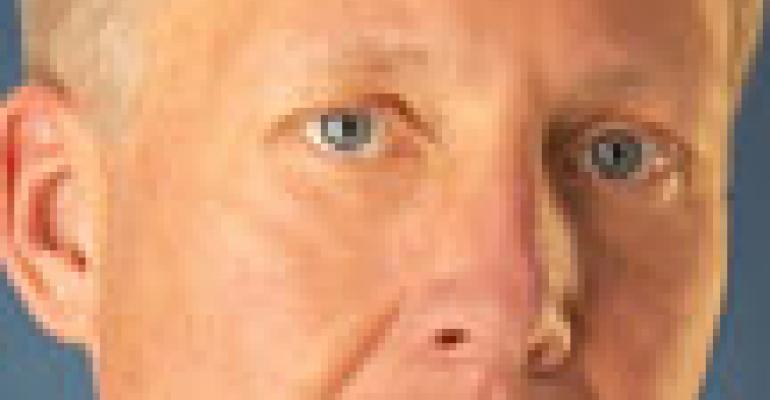 MONTVALE, N.J. Somewhere there's a punch line in the irony of an airline executive moving over to the food business. But for Jake Brace, who executed a turnaround at United Airlines and is now attempting the same at A&P, the parallels are no joke. Both United, which filed for Chapter 11 bankruptcy protection in 2002, and A&P, which did the same last month, were iconic names in their respective industries,

MONTVALE, N.J. — Somewhere there's a punch line in the irony of an airline executive moving over to the food business. But for Jake Brace, who executed a turnaround at United Airlines and is now attempting the same at A&P, the parallels are no joke.

Both United, which filed for Chapter 11 bankruptcy protection in 2002, and A&P, which did the same last month, were iconic names in their respective industries, subject to the heritage — and legacy costs — their longevity implied. Both operate in high-volume, low-margin industries under fire from a new breed of low-cost competitors. Both United and A&P filed for protection after a last-ditch financing effort failed. Both cited organized labor contracts and underfunded pension plans as components of their cost troubles.

Brace was United's chief financial officer when the airline giant filed for protection, after which he crafted its reorganization as its chief restructuring officer. At A&P, Brace became chief administrative officer in August, and in December was named chief restructuring officer. The law firm representing A&P in Chapter 11 is Kirkland & Ellis, the same group that handled United's bankruptcy.

While observers caution there are also significant differences between United and A&P, if United's experience serves as any guide there could be a bumpy flight ahead. By any measure, United's bankruptcy was long, contentious, expensive and for many, devastating. And while some credit Brace for saving the airline, others argue that he unnecessarily steered the process for the benefit of the controlling management.

United Airlines' flight to Chapter 11 resulted from a combination of high labor costs, market-share battles with lower-cost competitors leading to unprofitable routes, and industrywide revenue declines in the aftermath of the 2001 terrorist attacks.

“The big networks had to fight off the rash of low-cost airlines that grew much faster because their labor costs were so much lower,” explained Vaughn Cordle, a Washington-based investment research firm focused on the airline industry. “As the network airlines matched fares in the domestic market, they lost money. If they kept fares too high, they lost market share. The more market share they lost, the higher their unit cost, as fixed costs were spread over fewer seats. This resulted in a downward death spiral that ended in a crash and burn.”

United was uniquely unprepared to compete in this era. Labor unions making up the majority of its workforce, including pilots, machinists and flight attendants, made costs high, and wielded an effective tool in service-slowing job actions. An employee stock ownership plan also gave unions significant influence over the company through governance appointments on United's board of directors.

“They had the ability to reject and accept executive appointments, just an amazing amount of power,” said William Swelbar, a research engineer at the International Center for Air Transportation at the Massachusetts Institute of Technology. “One could make the case that, at the end of the day, unions are fairly simple organizations and I don't know if they were prepared to deal with the responsibility they were handed. And that contributed to some of the legacy issues at United.”

Unions helped to force out United CEO James Goodwin in 2001, and fire his replacement, Jack Creighton, less than a year later. Former oil executive Glenn Tilton was named CEO three months before United filed for bankruptcy in December 2002. Brace, who was named CFO in 2001, assumed the role of chief restructuring officer.

Much of United's efforts around its bankruptcy dealt with attempts to secure government financing, but concerns over pension funds underfunded by an estimated $9.8 billion scorched those efforts. This led to the largest pension default in U.S. history. United canceled those pension funds and transferred them to the federal Pension Benefit Guaranty Corp., which reportedly would guarantee only about $6 billion of the total. This, on top of two rounds of sharp cuts in labor contracts, was devastating for United's workers and made Tilton and Brace reviled names among the unions.

“We fought for 18 months to try and preserve our pension plans,” Brace was quoted as saying at the time. “We were unfortunately unable to do that.”

“Anybody put into a chief restructuring role, and having to deal with labor costs, is in for a thankless task,” Swelbar told SN. “And Jake accomplished his mission, going from one of the highest-cost producers in the business to one of the lowest cost from a labor-cost perspective. But it took a long time, and was complicated by the fact that not only did he have the unenviable task of addressing high labor costs, he also had a pension plan that was grossly underfunded and had to be canceled. And if you're trying to win a popularity contest, cutting a pension plan is not the way to do it.”

Cordle said he believes the labor cuts were the only avenue to United's survival. “It was an absolutely bloated company for too long,” he said. “Labor was taking 50 cents out of every dollar of revenue at United. The industry as a whole was about 30 cents, and the low-cost airlines in the low 20s. The bankruptcy saw labor costs cut from $7.2 billion annually to around $4 billion today. Labor took a 33% hit on average. That's the only reason United is still around today.”

Brace, who was not available to comment for this article, retired from United in 2008, three years after it emerged from bankruptcy. He served on the boards of troubled firms Neff Holdings, an equipment rental company, and Sirva, a moving company, both of which had successful reorganizations under Chapter 11. His next move was to the board of A&P — an invitation he received from Ron Burkle's Yucaipa Cos. after Yucaipa contributed $115 million and got two A&P board seats in a preferred stock purchase last year. That cash infusion in 2009 was among the first signals that A&P was headed for danger.

Since that event, two CEOs at A&P, Eric Claus and Ron Marshall, were ousted. Brace left the board to join A&P's executive ranks after Sam Martin took over as CEO last year. Martin also has ties to Yucaipa: He ran the Wild Oats chain while Burkle was an investor there.

Yucaipa's influence during A&P's Chapter 11 proceedings has already become a topic of some intrigue among parties in the case. A lawyer representing an ad-hoc committee of A&P bondholders last week reportedly was concerned over provisions in A&P's financing package that could put those holders further behind in line to be repaid, and told the judge in the case he wanted to know what Yucaipa's precise stake was, noting a rumor that Yucaipa is a party in the financing package.

Yucaipa and A&P both declined to comment to SN.

One industry source told SN that Burkle owns only 4% of A&P stock “but an increasingly larger amount of the debt, and he should come out OK and in a better position than before the Chapter 11 was filed because after a restructuring, you end up with a healthier company.

“The most important thing going forward,” the source added, “is the likelihood that in any restructuring scenario, the banks are going to want Ron Burkle and Yucaipa to be involved because of his knowledge and also because of his positive relationship with labor. So it's likely Burkle will have a role in a restructured A&P because of his expertise in the industry.”

A&P's bankruptcy is certain to test labor's resolve, sources said. In a declaration filed in court, Brace cited employee obligations — including underfunded single- and multi-employer pension plans and high store labor costs as a percentage of sales — among the “significant legacy costs” that have weighed on profits and margins and proven insufficient against heavy debts.

A&P is party to 39 separate collective bargaining agreements covering approximately 95% of its workforce. Many require the company to make contributions to workers' pension and health care funds.

“Certain of the debtors' multi-employer pension plans have already reached ‘red’ or ‘yellow’ status under existing regulatory requirements, and the debtors have recorded for a liability $97 million from previous pension fund withdrawals, as of Sept. 11, 2010,” Brace noted in his declaration. “The debtors may have a potential additional withdrawal obligation of up to $50 million payable over a period of up to 25 years in the future. The debtors believe their collectively bargained wage, pension and health care obligations place them at a competitive disadvantage and are unsustainable at existing levels.”

A spokesman for A&P declined to provide details on the level of A&P pension indebtedness. A spokesman for the United Food and Commercial Workers union in Washington told SN that the union was concerned about A&P's difficulties and was willing to help, but was quick to say its situation was different from that facing United's pilots and machinists in 2002.

“I don't like the idea out there that the union workforce forced [A&P] to go bankrupt, because that's not how it is,” the spokesman, Jim Papian, said. “Our members are the reason that so many companies are so successful, including many of A&P's national and regional competitors.

“We have 40,000 people who work for A&P. We are fully and totally engaged,” Papian added. “We are universally concerned and doing everything that we can to make sure that the restructuring goes that it benefits everybody.”

Burt P. Flickinger III, managing partner of Strategic Resource Group, New York, said the UFCW has been doing a “heroic job” in A&P's stores, and could stand against changes that would cost it pensions or jobs.

“To engage in brinkmanship with the UFCW may backfire because the union has been A&P's biggest supporters during its darkest hours,” Flickinger told SN. “If the company takes an anti-labor stance, labor could very easily say, we'll let the company go into potential liquidation mode, knowing that unionized employers such as ShopRite and Stop & Shop are going to pick up most of the stores and will actually do more volume, which will mean more union workers and a stronger union.”

The UFCW would be willing to compromise around solutions that would help stimulate sales and add jobs, he added. “The UFCW wants to be constructive with the company, but only if they see the company making some material moves to stimulate sales and job growth, which they haven't seen, no matter which executives or management firms have been there.”

Brace's appointment at A&P, made amid a rash of new executive announcements shortly after Martin took the reins this summer, may have flown under the radar. But his first public impression, while discussing quarterly results in an October conference call, was a strong one.

Using a robust, confident tone at a company where management had previously sounded tentative, Brace assured investors A&P would soon have financing in place and a turnaround under way.

The message resonated, but a snag in cost-reduction efforts underpinning the loan would within weeks send the retailer to Chapter 11 and Brace onto his next mission.

“[A&P] will use every available tool to bring their cost structure in line with market peers and maximize stakeholder value,” he said in his court declaration, “and leave no stone unturned.”