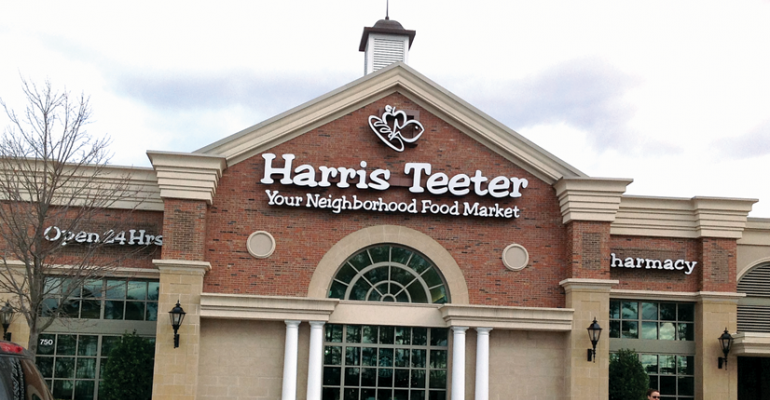 &ldquo;In the case of Harris Teeter, you have a very strong retail food franchise, and I think it would go in a range of six to eight times EBITDA.&rdquo; &mdash; Chuck Cerankosky, analyst, Northcoast Research

MATTHEWS, N.C. — Harris Teeter Supermarkets last week said it had received an offer to acquire the company from two private equity firms and had subsequently engaged J.P. Morgan to evaluate its strategic alternatives.

A potential auction of the 200-store chain — considered to be one of the best conventional supermarket operators in the country — could generate between $2 billion and $2.5 billion and attract the attention of numerous additional suitors, observers said last week.

“The company was approached by two private equity firms who expressed an interest in purchasing the company,” Harris Teeter said in a statement. “In order to fulfill its duty to its shareholders to evaluate opportunities to increase shareholder value, the company retained J.P. Morgan to assist it in conducting discussions with certain highly qualified parties.”

Harris Teeter did not identify the private equity groups that offered to buy the chain and said it would continue to pursue its ongoing program to build new stores and operate all of its facilities as usual during the review. The company also stressed that a deal may not result from the discussions.

For a company like Lakeland, Fla.-based Publix Super Markets — which recently established a new division in Charlotte to facilitate expansion into Harris Teeter’s North Carolina hotbed — Harris Teeter would allow for a dramatic expansion without needing to build its way north. But a company spokeswoman last week told SN the retailer was not in discussions with Harris Teeter and typically does not grow by acquisition.

Several sources also said Kroger and Ahold would likely have interest. Kroger, based in Cincinnati, has been reticent to do large acquisitions, in part because costs to invest in price and labor necessary to bring a new chain to its standards make deals too expensive. But Kroger would have less such concerns with Harris Teeter, Karen Short, an analyst at BMO Capital, told SN.

Sources said Ahold would also take a look, noting that company’s Giant-Carlisle division in 2009 won bidding for Ukrop’s Super Markets, the Richmond, Va.-chain with a positioning similar to Harris Teeter.

“I think when you look at deals over the last couple of years, you’re seeing relatively few strong chains acquired, with most of the rest being broken chains whose valuations are a fraction of their replacement cost, such as the recent Supervalu transaction,” said Chuck Cerankosky, an analyst following Harris Teeter for Northcoast Research, Cleveland. “In the case of Harris Teeter, you have a very strong retail food franchise, and I think it would go in a range of six to eight times EBITDA.”

By the same token, well-run chains have not typically been the targets of private equity buyers. Sources last week speculated the bidding firms would have experience investing in the supermarket sector, mentioning KKR, Yucaipa Cos. and Lone Star Funds, among others.

“Harris Teeter doesn’t fit the bill of where private equity is typically interested,” Neil Stern, senior partner at McMillanDoolittle, Chicago, told SN last week. “They typically invest in struggling or undervalued companies that they can restructure or add value to in some way.”

One source, who asked to remain anonymous, last week speculated that Lone Star Funds could have approached Harris Teeter, noting the same firm initiated talks with Winn-Dixie, leading to its purchase of that chain. Lone Star also owns Bi-Lo, a South Carolina-based rival of Harris Teeter.

KKR was another possibility, another source said. “They still have good people who know the supermarket business well, and they like to go after the premier chains,” the source said. A spokesperson for KKR was not immediately available for comment last week.

With Publix knocking on the door of its market, and executives including Fred Morganthall, president and chief operating officer, nearing retirement age, some sources said Harris Teeter would be wise to sell now and go out on top.

“If you’re smart, you know the competitive landscape isn’t going to get better for them,” Short of BMO Capital said. “So if you’re the CEO and you know you’ve had a good run and been extremely successful in terms of what you’ve been able to do to the stock price, why not exit as a hero?”