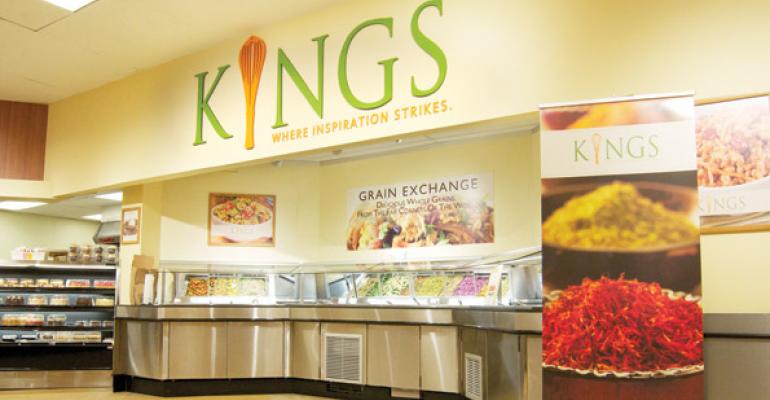 Kings Gets a Royal Makeover

The 75-year-old New Jersey chain earlier this month unveiled a new brand image that builds on its reputation for specialty goods and service by positioning the store as a destination for discerning foodies in the mainly well-heeled neighborhoods in which it does business.

The brand is built upon the premise that Kings and its shoppers share a passion for food, and that the store — along with a newly designed Kings website — can stimulate that passion. “Where inspiration strikes” is the new tag line.

“If you look at the key elements of the Kings brand — our fresh products, our amazing service, our unique offerings — there wasn’t any other way to go: This brand is inspiring,” Judy Spires, chief executive officer of Kings, told SN during a visit to a remodeled Bedminster, N.J., store where the new expression was showcased earlier this month. “In our new messaging, we really wanted to capture that moment when the freshest ingredients, the rarest finds and the passion for cooking come together to create the perfect meal. When you walk though our store, you can see this inspiration on the faces of all our team members. Therefore, ‘where inspiration strikes’ was a perfect fit.”

The new branding represents one pillar in a three-pronged, three-year revenue growth plan for Kings Food Markets and its private owners known as “three Bs” — for Build, Buy and Better.

“The build is we’re going to build new stores,” Spires explained. “The buy — we’re looking for acquisitions. And better is what you see today.”

Such activity is something new for Kings, a 24-store, 75-year-old chain that has been in something of a holding pattern for years now. It is owned by New York investment firm Angelo, Gordon & Co., which acquired it in 2006 from British retailer Marks & Spencer. The latter group acquired Kings in 1998, intending to use it as a base for a prepared-meal launch in the U.S., but the strategy never got off the ground. It then struggled for years to find a buyer.

Angelo, Gordon also acquired the upscale Balducci’s chain in 2009. Balducci’s and Kings are overseen by a board of directors chaired by supermarket industry veteran Jim Demme.

Demme recruited Spires in 2010 from Acme Markets, where she served as CEO. She said her first order of business at Kings was identifying what the chain did right; her next move was to take those strengths and amplify them. “Like Emeril says, we kicked it up a notch.”

Those strengths include a reputation for specialty products, prepared foods and service in a setting that tends to be more intimate than supermarket competitors, Spires said.

“We want to be the food market that is known for the freshest quality foods, one-of-a-kind products, intimate marketplace and personal attention,” Spires said. “This is what we stand for and how we differentiate ourselves, and ultimately, how we win customers.”

Similar store renovations to the one unveiled in Bedminster are under way at Kings stores in Livingston and Hoboken, N.J., Spires said, adding that her goal is to touch all of its stores with aspects of the rebranding over the next few years. She said the chain was close to signing a lease for a new store and was looking at acquiring sites, noting that the company’s smaller store size — the Bedminster store is just 29,000 square feet — will help it fit into places where competitors can’t.

Kings charted sales of $507 million last year, and Spires said profit margins and comps were “well above industry averages,” but the chain thinks its new approach will win it more shoppers.

“This company does a lot of things right and gets tremendous recognition from customers. Then the question is, how do we take that passion and loyalty and expose it to more people,” Spires said. “Our goal is to go after more customers — and younger customers, which we’re doing now with Twitter and social media tools.

“Our customers are very sophisticated, and we therefore need to stay ahead of the curve,” she added. “That’s why this rebranding initiative is so important. We want to be able to bring them the best possible shopping experience, while also exposing new customers to Kings, all if which requires the capital growth investment you are seeing here today.”

The redesigned Bedminster store might be compared with a more intimate version of Wegmans or a Fresh Market location with a local feel. Specialty products are emphasized in fresh and Center Store, including expanded selections of plate ware, a line of Papyrus greeting cards and stationery, and large sections devoted to candy and chocolates. It’s an environment suited to well-to-do Bedminster, a Somerset County burg, which according to 2000 U.S. Census data had a family median income of more than $96,000. A “Real Housewife of New Jersey” — Caroline Manzo, who appears on the Bravo TV program — was among the guests at the grand opening event.

The store features a new layout and an expansion as Kings acquired neighboring small-shop space in the center for use as a new 5,000-square-foot section for produce and floral. This change caused Kings to run afoul of the conventional grocery-store practice of having shoppers enter into the produce department first. A counter-clockwise trip through the Bedminster store arrives at produce last, but for good reason, said Tom Hencken, vice president and director of design for API+, the Tampa, Fla.-based architecture firm.

“With the prepared foods they’ve got? That’s really their calling card,” Hencken explained at the store opening event. “A lot of people do produce well, but very few can prepare foods as well as Kings can.”

When shoppers arrive at the new Kings, the first thing they see is the sushi. That department, managed as at all Kings locations by Ridgefield, N.J.-based Sushi Maru Express, begins a prepared-food counter occupying roughly a quarter of the 29,000-square-foot store.

Alongside the sushi department, workers make pizzas in a gleaming Marra Forni wood-fired pizza oven. The oven — whose brick interior surface contains ashes from Italy’s Mount Vesuvius, according to Spires — reaches 800 degrees and can fire a thin-crust pizza in 90 seconds, she said.

Fresh-made pasta and a deli department complete a span of prepared foods at the front of the store. Facing that counter is a new cheese department with 400 rare and specialty cheeses, self-serve salad and hot food bars and a “grain bar” with various rice and couscous in colorful displays. A bakery, coffee department, olive bar and cafe with seating and free wi-fi then give way to service meat and seafood departments in the rear of the store.

Hencken, whose firm was responsible for crafting layouts, graphics, finishes, flooring and lighting at the remodeled store, said Kings was able to add prepared food square footage without sacrificing too much in the Center Store by making better use of the vertical space.

Officials at Tierney, the Philadelphia-based public relations agency, worked with Kings in defining the new brand, including the new “Where inspiration strikes” tag line, a new logo and the new website. The logo incorporates an image of a whisk for the letter I in Kings and lends modern elegance and a sense of culinary creativity to the brand, said Molly Watson, chief operating officer of Tierney.

“Together with Kings we looked at other utensils, but a wooden spoon, for example, was something that felt old fashioned, sort of looking back, and it was important to position Kings as looking ahead,” Watson said. “Providing contemporization for a 75-year-old brand without walking away from its heritage was really critical. The use of a modern whisk is a mechanism to better communicate that Kings is forward-looking, and even more importantly, that Kings cares about its customers’ participation — how they share Kings’ love of food.”