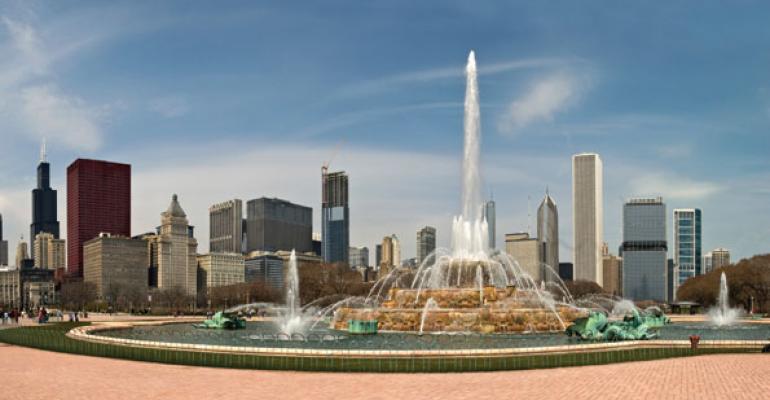 Emboldened by the struggles of its traditional market leaders, a rash of new competitors is carving up the food market in Chicago like nothing since the heyday of the Union Stockyards.

While everyone from Whole Foods to Walgreens has cut a slice of the market share surrendered over the past decade by longtime leaders Jewel and Dominick’s, the sharpest knife in the block may belong to Mariano’s Fresh Market, a newcomer from Milwaukee-based Roundy’s.

Using a combination of presentation, service and price that reminds some observers of Wegmans’ stores on the East Coast, Mariano’s has opened five stores in greater Chicago since debuting in Arlington Heights, Ill., nearly two years ago. Their high volumes and ambitious plans for growth signal the arrival of a potential major force in the market, observers say. 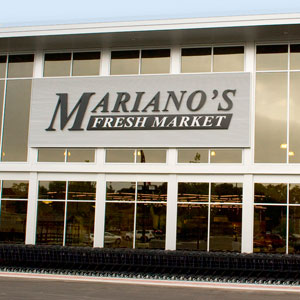 “This is a historic time of vulnerability for the two main players in Chicago, and that’s given Mariano’s the opportunity to come into the market,” Neil Stern, senior partner at McMillan Doolittle, Chicago, told SN. “And it hasn’t just been Mariano’s — it’s been Whole Foods, Trader Joe’s and Food 4 Less on the price side. It’s also one of the most successful markets in the country for Aldi, and of course Wal-Mart has been very active. It’s a market where a lot of competitors are trying to fill a void where Jewel and Dominick’s used to be.”

While Jewel and Dominick’s remain the respective top two sellers of food in the Chicago market, between them they have lost more than 23% market share over the last decade, figures from Metro Market Studies, Tucson, Ariz., show. Jewel, a division of Minneapolis-based Supervalu, in 2002 commanded 41.5% of the 11-county Chicago television market but its lead has shrunk to 30.9% according to Metro Market’s latest figures. Dominick’s, a division of Safeway, meanwhile has seen its share slide from 22.3% of the market in 2002 to 9.1% today, only points ahead of fast-growing Wal-Mart Stores (see the table below). 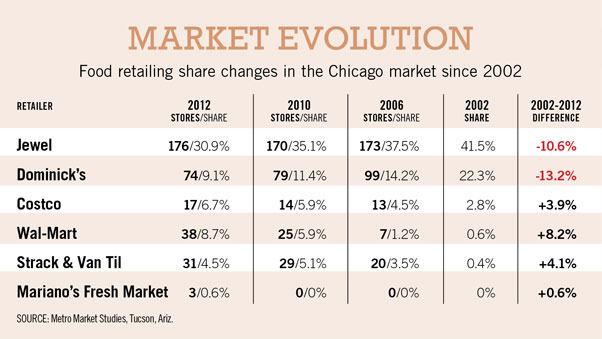 “The Chicago market is open season, and I expect Mariano’s, Wal-Mart, Meijer and [Strack & Van Til] Ultra Foods to make sport of Jewel and Dominick’s,” said David Livingston, a Pewaukee, Wis.-based industry consultant.

At Dominick’s, Mariano was a high-profile leader who was featured in the retailer’s ads. Some of that equity — and much of the knowledge — from those days is retained in Mariano’s, sources said.

“One of the reasons [Mariano’s] use his name is that Chicagoans know him,” Andrew Wolf, an analyst at BB&T Capital Markets, Richmond, Va., told SN. “And I think the marketing work they did indicated his name had a good connotation in the market.”

The local knowledge also shows in Mariano’s real estate selections and in the stores’ merchandising touch.

“They picked good real estate and certainly Bob Mariano’s hometown knowledge has been important,” said Stern. “Having been at Dominick’s, he knew where the good stores were and was able to put his stores in the right places. That’s one of the reasons they have been so successful to this point.”

Stern noted that the locations of Mariano’s stores — many in wealthier suburbs around the city — have traditionally been strongholds for Jewel.

“You have to give Bob Mariano a lot of credit,” Bill Bishop, chairman of Barrington, Ill.-based Willard Bishop, told SN. “He took a major risk and made a major investment. His first store was a home run, but there were no guarantees. But Bob had the vision, and the personal energy, and he put his name on the door. It feels like it’s his business and that makes a difference.

“He knows the market,” Bishop added. “He’s a retailer. He’s not a business guy who went into retailing.”

Sources describe Mariano’s as an innovative format combining powerful produce and perishables merchandising, everyday low prices on groceries, and high levels of customer service. Its first five stores are running above expectations at more than $50 million in annual sales per store, sources said.

“The performance of these stores has well exceeded our expectations, generating higher average weekly sales than our stores in other markets and operating income that is outpacing our forecast,” Mariano told analysts in a conference call last month. “The positive customer response we have received has been consistent as we’ve continued to open new stores, which gives us confidence that we have a formula that works in Chicago.”

Mariano’s prices on groceries are generally lower than the market, reflecting the flatter pricing structure of Roundy’s stores in Wisconsin, Bishop said. Those prices are supported by higher sales volumes from shoppers attracted to the service and perishable selection at Mariano’s.

Wolf called the offering “fancy food for the masses,” likening it to a Midwest outpost of Wegmans or H-E-B’s Central Market.

“I think it’s a very powerful, high-volume, high-quality supermarket format, styled in good measure after Wegmans,” he said. “It’s not quite a full-blown Wegmans but it has a very complete perishable set with a full selection of high-end things like specialty cheese and bakery. When I went down the bakery aisle, that’s when I had the Wegmans ‘aha.’ I saw some of the things that Wegmans would put in there.

“They are able to do that because they’re getting a million [in sales] a week, or about twice the volume of a supermarket, “ he explained. “You don’t get that just through great selection and merchandising theater, you get it through value. And their pricing is well below other supermarkets in the market.”

Livingston described the pricing at Mariano’s as “very aggressive.” Combined with a large labor force, he raised questions as to the sustainability of the model, particularly in locations where sales volumes aren’t so high, and shrink and other costs weigh on profits.

“The front end, grocery aisles and perimeter are loaded with labor, and service levels are extremely high,” he said. “I’ve never seen service levels so high at a lower-priced store like this. As for the consumer, they are getting one heck of a deal — low prices, excellent service, high quality. But I’m just not so sure the stockholder is getting anything out of it.”

Mariano in a conference call last month revealed that the composition of the labor force was one of the contributors to a measured initial rollout of stores, saying “bench strength” would support a faster rollout. The chain plans another three new stores this year, and projects to build about five new stores a year through 2015. If current trends hold that could be a billion-dollar business by then.

“We don’t want to undo the good we’ve done down there, we want to continue the positive momentum,” Mariano told an analyst who asked whether the company would take on more debt to fund a faster store rollout. “A key ingredient to that is the teams that are down there and the way they’re serving the customer, and we don’t want to lose that. So, understand we’re being … prudent in not stepping on the gas pedal too hard too fast.”

A Taste of Philly?

The phenomenon of established brands losing ground to new price-focused players is playing itself out in markets like Philadelphia, where Acme (owned by Supervalu) and Genuardi’s (a Safeway banner) have seen their shares ravaged by more aggressive and/or more experiential retailers like Ahold’s Giant-Carlisle, ShopRite, Wegmans, Wal-Mart and Target. That situation came to a head earlier this year when Safeway reached an agreement to sell Genuardi’s piecemeal.

Observers in Chicago aren’t sure whether a similar fate awaits its established players, but note the stores in both markets suffered in part as a result of insufficient upkeep and high, legacy cost structures. For their part both Supervalu and Safeway have programs under way designed to address those issues. 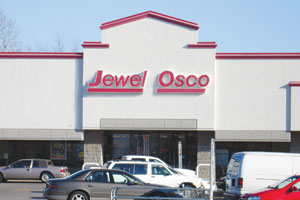 Work is under way at Jewel to realize Supervalu’s chainwide improvements to local merchandising and pricing. Wolf suggested that Jewel, as Supervalu’s largest and most powerful banner, was receiving a disproportionate amount of its price investments.

“In order to make some inroads I think they’ve got to keep at the pricing a little longer,” said Stern. He noted that Jewel has been “caught up in the bigger problems that Supervalu has been having,” but that it historically has withstood challenges.

“Jewel has been so dominant for so long, that whatever new thing that comes is invariably compared to it,” he said. “Whether it’s low prices, or more service or more variety, it’s a reference point for the marketplace. And for all the changes that have happened in the Chicago market, Jewel has pretty much remained untouched.” 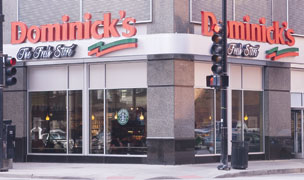 And while Jewel has roughly the same number of stores it had a decade ago, Dominick’s operates less than half the stores it used to, with many turning over to competitors when their leases expire.

“There are people in Chicago who believe what Dominick’s doing is a kind of organized bankruptcy,” Stern said. “They’re making that assertion based on the fact that Dominick’s hasn’t renewed a lease in years.”

A recent report in Crain’s Chicago Business noted the chain also suffered as a result of higher labor costs than its competitors, estimated at 27% of sales.

Dominick’s has been the subject of sale speculation many times over the years, but several sources said its best chance for a good outcome would be to improve the chain first.

“I don’t know what their strategic intention is, but I don’t think they’re a flat-liner like Genuardi’s,” Wolf said. “I think there’s a little upside if they can run it better, and if [Safeway’s new personalized pricing program] Just for U can help sales then maybe it can make it a little money.”

The fastest market-share gainers in Chicago are superstores. Wal-Mart Stores, behind supercenters in the suburbs and small-store expansion closer in to the city, in the last decade has become a force in the market, accounting for 8.7% share today, according to Metro Market Studies. And Target, in the midst of a transition to its PFresh, food-focused prototype, today commands a 4.7% share behind 72 stores, accounting for the same share that Aldi has of the market with 157 stores. Aldi’s U.S. operation is based in the Chicago suburb of Batavia, Ill.

Key to Wal-Mart’s growth in Chicago was its success in moving closer to population centers in and around the city with its smaller Neighborhood Market and Express formats. Meijer, the Grand Rapids, Mich.-based superstore operator, is experimenting with a similar strategy, opening grocery-only stores in Niles and Orland Park and more recently a Meijer Marketplace “mini-supercenter” of 96,000 square feet in Melrose Park. Meijer operates 16 supercenters measuring around 180,000 square feet in the Chicago TV market, but most are in outlying areas.

Hank Meijer, Meijer’s chief executive officer, told SN earlier this year that the chain still had a lot to learn about operating smaller stores but saw them as essential to growing the company in more affluent, densely populated areas.

Wal-Mart last month opened its third Walmart Express in Chicago in the city’s River North neighborhood. It also operates Walmart Express stores in Chatham and Wrigleyville. The River North store is 16,000 square feet and tucked under an L train stop — an unimaginable environment for a supercenter. The stores offer groceries, prepared food including sushi and gourmet sandwiches, and a pharmacy.

Another newcomer to the Chicago market is Heinen’s Fine Foods, the Warrensville Heights, Ohio-based retailer that announced plans to open its first store in Barrington, Ill., in August. Similar to its Cleveland-area base, Heinen’s is preparing an upscale offering of service departments, prepared foods and organics, it said on its website.