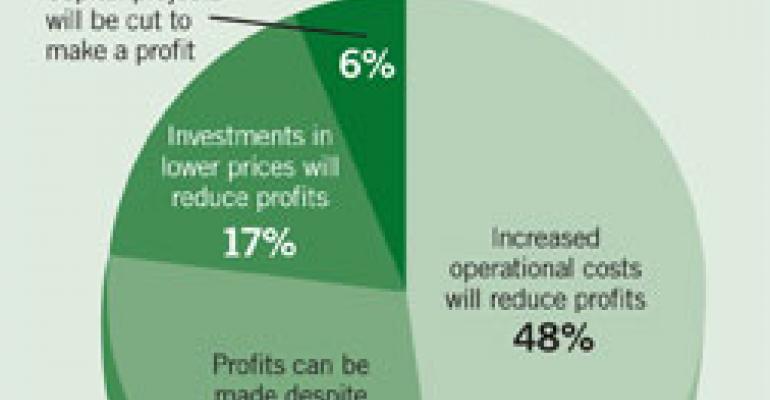 The biggest challenge for independent grocers in 2009 will be their ability to control rising costs while maintaining profits, according to a recent poll of National Grocers Association members. The poll, which was conducted in November by NGA for SN via email and fax, surveyed 134 respondents about their business expectations in 2009 as members face a deepening recession and a new presidential administration.

The biggest challenge for independent grocers in 2009 will be their ability to control rising costs while maintaining profits, according to a recent poll of National Grocers Association members.

The poll, which was conducted in November by NGA for SN via email and fax, surveyed 134 respondents about their business expectations in 2009 as members face a deepening recession and a new presidential administration.

When NGA members were asked what would most negatively impact their ability to make or improve profits in 2009, nearly half said they expect increases in operational costs would eat into their profits. Despite this fear, nearly 30% said profits could be made despite the rough economy. About 17% said investments in retail price would reduce their profits.

“We recognize we have to watch every line of our statement,” said Dave Skogen, chairman of Onalaska, Wis.-based Festival Foods, which operates 13 stores. “We have the same fears as our consumers. They look at us as their agent for quality, price and service. If we don't perform, they will find another agent. We understand that and talk about it a lot in our leadership meetings.

“A lot of things will change in this environment, and we have to move with it and stay in step with our guests. We have to understand what they are going through and deliver low prices and expose them to our private label.”

While grocers said the economy is their No. 1 concern, they ranked increased government regulations and rising operational costs as their second- and third-biggest concerns, respectively.

“It is fear of the unknown,” said Mike Panalp, president, Blackford County Foods, Fishers, Ind., who operates a small conventional store and three Save-A-Lots. The Save-A-lots are doing well in the recession, he said. “Our margins are tight, but sales are good.”

He said he is concerned about what the new administration will do with new policies such as taxes and passage of the card check as part of the Employee Free Choice Act.

Michael Ward, president, Alaska Growth Business Corp., Haines, who operates Howser's IGA and a convenience store, said card check legislation also concerns him. “If that happens in the lower 48 states, it will add to our economic woes,'' he said.

Ward operates outside of Juneau and is dependent on shipping for food supplies. He noted that field surcharges on freight are up, and so far he is absorbing those increases, which he said can have a big impact on business.

Eric Wahlman, president, Buy Rite Foods, Milford, Iowa, said the unknown concerns him. Local taxes are top of his mind. “Locally, in the state I am concerned about real estate, because there is no relief in Iowa from commercial property taxes. Residential gets a break, but the commercial property tax goes up every year, and we are assessed full value. There is no relief.”

“I don't think the economy will get better, because it is pretty bad right now. It will stay the same,” said Ward.

Panalp said if the economy brought consumers to their knees, it would impact grocery sales. For now, he expects his sales to grow, with margins flat.

Most observers agree the economy has forced consumers to rethink how they shop. Changes in shopping patterns are hurting independents, with more consumers shopping discounters for lower prices, retailers said. As a result, grocers feel compelled to offer more sales and discounted items, which inevitably cuts into profits. About 18% said that the trading down they see in shopping also is squeezing their profits.

Wil Chase, president and chief executive officer of Byers General Store, Byers, Colo., has been hit hard by the economy. The growth in residential real estate development in his market has ended, and unemployment in the construction industry is high. He said his shoppers are confused about how much they should be spending on groceries.

“We are very competitive on pricing. We work with Affiliated Grocers of Amarillo [in Texas]. We are a Thriftway store — a high-discount store.”

Chase said a new King Soopers, which opened a year ago 13 miles from his store, has not impacted sales as much as the poor economy.

“We are holding our own against King on pricing. Our customers are loyal to us for several reasons. We have the right products at the right price when they come in. That is the first key to customer service. Our customers worry about us. What we have is good. We need to recognize it and grow it.”

As they face a deepening recession and the incoming Obama administration, 61% of retailers said they are nervous about what will transpire. Nearly a third said they lack confidence that much can be accomplished by the new administration in the coming year. Just 11% said they believe things will improve for the country and the economy.

Chase thinks the country's economic problems may be too difficult for Obama, and that more businesses may have to go under in order for the economy to reach a state of normalcy.

“I am not sure anyone can handle this economic problem,” he said. “I think this is something that has to happen [more major company bankruptcies], and we'll be a lot better off once we allow it to happen and get it over. I don't expect the economy to get better for several years.”

Half of grocers surveyed believe the economy will take precedence over the public's health and wellness concerns. A third of retailers said that in response to health issues, consumers would turn to more affordable healthful foods. Only 19% of respondents said health and wellness would remain a key driver to store sales.

“We need something to happen on health care reform. I don't know whether Obama has the answer,” said Ward, who said he would like to offer health insurance to his employees, since the business has matured after 29 years of operation. But he said he wants to make that decision himself. “I always resist somebody telling me that we have to do something.”

“Health care is a concern, especially if we go with universal health care,” said Wahlman, who offers employees working over 30 hours health insurance. “We are trying to control our costs, but it's difficult. We just don't know what is going to happen with the change in government and Congress being more liberal than in the past. All you can do is dig your spurs in and ride the thing.”

Despite the tight money market, 66% of grocers rated their ability to obtain credit as good, 28% said it was OK and the remainder rated their chances to get loans poor.

As an independent retailer facing 2009, just over half expect their business to stay the same, a quarter believe their business will improve and 15% expect it to worsen.

Ward hopes sales can stay ahead of inflation. “We're in a seasonal economy, with a lot of travelers in the summer. But I think travelers to Alaska will be down again, because people will be broke. My goal is to hold our own and keep ahead of the rate of inflation. Just holding our own is good.”

Panalp expects sales to be up but margins to be flat to negative. “The conventional supermarket will face a very tough year,” he added.

“I feel neutral [about 2009],” said Calvin Smith, owner of Cascade Select Market, Castle Rock, Wash. “I don't feel extremely optimistic, but on the other hand I've been around long enough to know these things do turn around. But you have to be patient and hold on tight.”

Chase of Byers General Store said he will reassess his business. “In the past we've added a lot of departments and got a lot of natural growth. We'll be looking at a lot of things we were ignoring as we grew.” His goals are to develop the business while coping in a new environment.

The tough economic conditions will only make Festival Foods a better operator, said Skogen. “This will elevate us and make us better and drive unnecessary costs out of the business, and just make us stay more focused than we've ever been.”