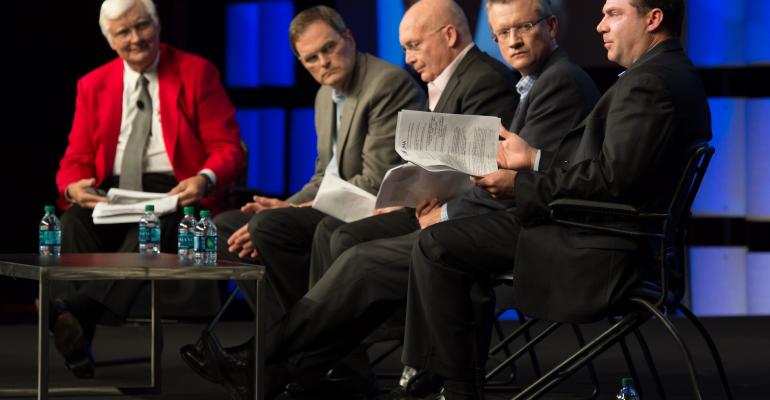 ORLANDO, Fla. — Grocers will cede about 11% of their sales to online channels in the next 10 years, according to research presented at Food Marketing Institute’s Future Connect conference here this week — but not all agree with that assessment.

“I just don’t buy the 11% number,” said Joe Crafton, chief executive officer, Crossmark, in a panel at Future Connect on Wednesday. “I may eat those words, but I would rather be a little provocative.

“I see retailers experimenting with things like ship-to-store, and same-day pick-up, and I just think retailers are going to make those kinds of adjustments. I believe that bricks and mortar will be here for food.”

He conceded that some supermarket purchases will be siphoned off — categories like razors and diapers through sites like Dollar Shave Club and Diapers.com, respectively — but not so with most food purchases.

“We know that people like to see and feel some of the products they purchase, more so in food than nonfood,” he said. “And, if you look at Amazon’s website, they are clearly not focused on food right now. If I were Wal-Mart or Target I would be a little more worried about Amazon than I would if I were a grocery retailer.”

On the other hand, he pointed out, the aging population is getting less mobile, and part of the appeal of online shopping is that there is not a need to leave the house.

Crafton and Hale were speaking on panel that presented FMI’s Trends research at Future Connect. Unlike past years, when FMI usually presented the Trends report itself, this year it worked with four research partners — Booz & Co. and Catalina, in addition to Crossmark and Nielsen — who compiled a 100-page report on consumer and industry trends and will be disecting it in a series of webinars.

John Miles, chief technology officer at Catalina, also offered support for the bricks-and-mortar grocery channel, noting that “one advantage grocers have is that they do have stores, and Amazon does not.”

That allows consumers to choose the channel they want to shop in, whether it is online through a web-only player, through their local grocer’s website, or in the stores themselves.

Miles did note, however, that “digital technologies are creating a tectonic shift like we have not seen in the last 25 to 30 years.”

Hale noted that the "cool" factor is becoming more important to the in-store experience, with stores like Whole Foods raising the bar for grocers.

"Unless you are a deep discounter, you have to win with 'cool,'" he said.

Other issues addressed by the panel included the potential for consolidation due to overcapacity, evolving demographics, and trends in merchandising and marketing.

By 2025, the Trends report indicates, supercenters will have virtually saturated the U.S., dollar stores will have added another 36,000 locations, and retailers will add more than 200 million square feet of new space.

“In the last 15-17 years, the industry has added about 80% capacity, while demand has grown about 40%, so you can see that the productivity per square foot has declined dramatically,” said Nick Hodson, a partner in the San Francisco office of Booz & Co. “Sooner or later the industry has to consolidate.”

Again Crafton disagreed to a degree, saying that supermarket operators would not continue to add unproductive square footage.

“I tend to be more optimistic about retailers’ ability to adapt,” he said. “As far as adding 200 million square feet, I think retailers are smarter than that.”

In discussing the impact of the growing Hispanic population, Hale said it may be easier for retailers to adapt to than they might fear. The top-tier categories in the store tend to be roughly homogenous across Hispanics and other ethnic groups, he said, noting that preferences become more differentiated in second- and third-tier categories.

Easy marketing changes to reach the now-ubiquitous Hispanic consumer are overdue, however, he pointed out.

“If you are a retailer, and you don’t have a Spanish language option on your website, shame on you,” Hale said, noting that the three largest pizza chains all offer Spanish language versions of their websites.

“There are lots of simple things you can do to connect with those shoppers, and I don’t think it will be as hard as we might think it is,” he said.

Hale noted that one demographic that food retailers need to focus on is Millennials.

“Older people shop, they make more trips than anybody, but what about Millennials? They are not in stores that often, so capturing that trip is very important,” he said.

“There are a sea change of issues to address,” concluded Thom Blischok, chief retail strategist and senior executive adviser, Booz & Co., who led the panel discussion.

Video: ‘Formula Quite Simple’ to Develop Future Leaders Today
May 02, 2013