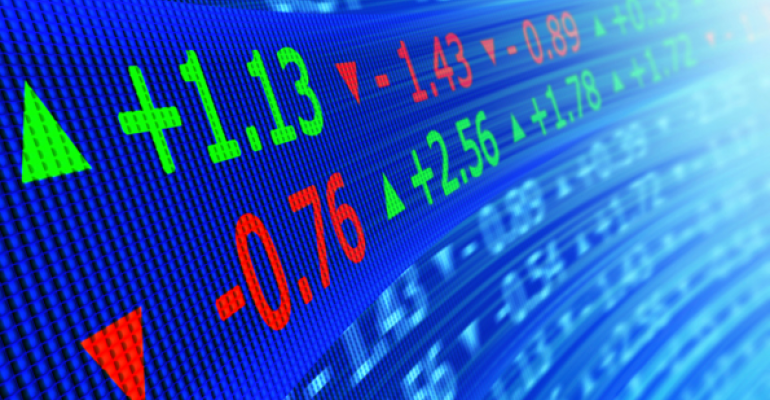 Buoyed by an improving economy and an increase in merger-and-acquisition activity, food retailing stocks gained ground in the first half of 2013, with many outpacing the market overall and all showing at least some positive movement.

Minneapolis-based Supervalu, which completed the sale of its largest traditional supermarket banners in March, was the industry leader in terms of percentage gain in the first six months, as its stock more than doubled, to $6.22 per share. It was followed by Roundy’s Supermarkets, Natural Grocers by Vitamin Cottage, Delhaize and Ingles Markets.

Cincinnati-based Kroger Co., whose agreement to acquire Harris Teeter Supermarkets was not announced until July 9, also saw significant gains in the first half — up about 34% — apparently based on its financial performance.

“Overall, things are getting ‘less worse’ for the industry with the economy improving,” said Andrew Wolf, a Boston-based analyst with BB&T Capital Markets. “Conventional grocers were led by Kroger’s accelerating earnings fundamentals, and most operators have turned the corner, more or less.

“There have been incremental improvements in the fundamentals for most operators, going either from ‘bad’ to ‘less bad,’ or ‘mediocre’ to ‘less mediocre,’ and that, generally, is where the stock market expands valuations.”

While all 24 North American food retailers and wholesalers tracked by SN saw gains in the first half of 2013, about half of them saw gains that exceeded the Dow Jones rise of 13.78% in that period. The SN Composite index, as compiled by Data Network, Huntington, N.Y., showed a gain for the six-month span of 8.48%.

In a research note last week, Scott Mushkin, an analyst at Wolfe Research, New York, noted that recent gains in the stock prices of some natural and organic specialists — including United Natural and Whole Foods Market (up 13.47% in the first half, to $51.48) might not be warranted.

“While we believe sales in the channel remain relatively strong, we have seen little evidence of sales acceleration either from our survey data or from other industry sources,” he said in the report. “This suggests companies in the space … could see their equity take a breather in the near-term.”

In addition to the improving economy and incremental gains in operating fundamentals, other factors might also be attracting investors to the supermarket sector. Many of the stocks have underperformed the market in recent years, attracting investors who are seeking value opportunities, Wolf noted.

“When you have two years of underperformance, and it looks like the worst is over, you have value investors looking at the stocks,” he said.

In addition, the increase in acquisition activity in the first half of 2013 might be giving investors a reason to take a closer look at the sector.

Among the M&A activity — which was mixed in with some top-level executive changes at the industry’s largest companies — in the first half:

• Supervalu saw its stock launch an upward trajectory after the Jan. 10 announcement that it had agreed to sell its Albertsons, Jewel-Osco, Acme and Shaw’s/Star Market banners to a private equity consortium led by Cerberus Capital Management for about $3.3 billion. The sale, through which Cerberus acquired a stake in Supervalu, was completed March 21.

• After trade reports surfaced that Harris Teeter Supermarkets could be looking for a buyer, the company finally confirmed on Feb. 13 that it had been approached by two private equity firms about a possible buyout, and that it was considering the possibility of a sale. On July 9 Harris Teeter announced that it had reached an agreement to be acquired by Kroger Co. for about $2.5 billion. Its stock gained 22.35% in the first half, to close at $46.86 on June 28. It has since gone up to near the $49.38 per-share offer from Kroger.

• Delhaize on May 8 announced that longtime CEO Pierre-Olivier Beckers would retire by the end of the year, while at the same time reporting positive sales momentum at its Food Lion and Hannaford Bros. banners. About three weeks later the company said it had reached an agreement to sell its long-struggling Sweetbay banner in Florida, along with the Harveys and Reid’s chains, to Bi-Lo Holdings for $265 million. Delhaize’s stock was one of the top gainers in the first half, as its shares rose 56.91%, to $61.84.

• Safeway kicked off 2013 with the Jan. 2 announcement that longtime CEO Steve Burd planned to retire. On April 29, Robert L. Edwards, who had been promoted to president last year, was named as Burd’s successor in the CEO role. Soon after he officially took over as CEO, Safeway said on June 12 that it had agreed to sell its Canadian operations to Sobeys for a total of about $5.8 billion. Safeway’s stock rose 32.77% in the first half, to $23.66.

“M&A has picked up,” noted Wolf. “Take all that together, and you realize that managements and strategic buyers and private equity firms are still making multi-billion-dollar bets on the sector. That clearly gets investors’ attention, that there is so much interest in the sector.”