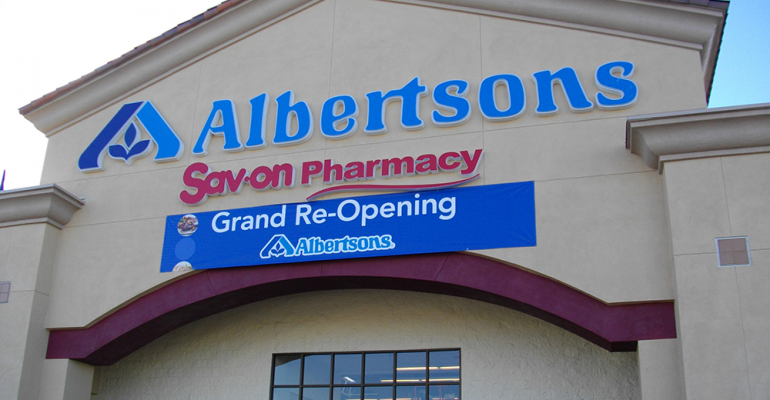 Retailer wraps up store IT conversions from Safeway integration

Albertsons Cos. posted sales gains and improved operating results plus a smaller net loss for its fiscal 2018 second quarter.

The nation’s second-largest supermarket retailer attributed the revenue gain to increased fuel sales and the uptick in identical-store sales, partially offset by lost sales from the closing of 30 stores during the fiscal 2018 first half.

E-commerce sales, meanwhile, jumped 113% versus a year ago, and the company raised its private-brand penetration by 44 basis points to 25%.

Albertsons also reported that it has completed store conversions to Safeway IT systems. The companies merged in January 2015.

At the bottom line, Albertsons had a second-quarter net loss of $32.4 million, compared with a $355.2 million net loss in the prior-year period, which included a goodwill impairment charge of $142.3 million.

Selling and administrative expenses (SG&A) fell to 26.3% of sales from 27.5% a year earlier. Albertsons said the SG&A decrease reflects gains related to property dispositions in the 2018 quarter, impairment charges from underperforming stores in the 2017 quarter and the realization of cost reduction initiatives. That was partially offset by higher acquisition and integration costs from the conversion of 219 stores in the 2018 quarter, compared with 82 stores a year ago, and third-party costs from the terminated merger transaction with Rite Aid Corp., according to the company.

Adjusted EBITDA (earnings before interest, taxes, depreciation and amortization) came in at $548.6 million, or 3.9% of sales, for the 2018 second quarter compared with $485.2 million, or 3.5% of sales, a year earlier. Albertsons said the 13.1% EBITDA increase was by the rise in same-store sales, improved gross profit and cost reduction efforts.

“We are pleased with our second-quarter results, as identical sales grew for the third consecutive quarter and adjusted EBITDA grew over 13% in the quarter compared to last year,”Albertsons Cos. CEO Jim Donald said in a statement. “We are energized and enthusiastic about our company and our ability to generate free cash flow and delever our balance sheet. The team continues to innovate through our digital engagement with customers — in both the four-wall and no-wall environment — through our continued expansion of natural and organic own-brand offerings and through the automation of our distribution centers, which we believe will deliver strong returns going forward.”

Donald added, “We are also thrilled to have completed our store systems conversions related to the Safeway integration, which will allow our operators to relentlessly focus on running great stores.”

Albertsons said its $631 million in capital expenditures for the 2018 first half included about $40 million for the Safeway integration, 59 store remodels, three new store openings and continued investment in digital marketing capabilities. During the period, the company also completed the sale and leaseback of two distribution centers for a total purchase price of about $290 million, net of closing costs.

Looking ahead, Albertsons updated its guidance for the full 2018 fiscal year, lowering its outlook for same-store sales and raising its capital expenditures forecast.

The company said it now expects identical-store sales growth of 1% to 1.3%, compared with its projection of 1.5% to 2% in mid-July when reporting first-quarter results. Capital spending is pegged at $1.4 billion, up from $1.2 billion in the retailer’s earlier forecast.

Albertsons reaffirmed its adjusted EBITDA guidance of $2.7 billion for the year.