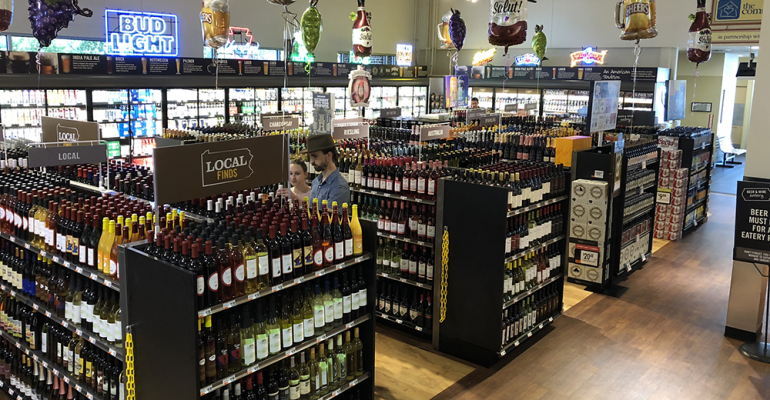 Today, the Giant store in Camp Hill will open the supermarket chain’s 65th Beer & Wine Eatery in the state, inaugurating sales of alcohol in the borough.

And this fall, Giant plans to have a new e-commerce hub up and running in Lancaster. The location will be the Carlisle, Pa.-based chain’s fifth such facility with online grocery partner Peapod, a sister Ahold Delhaize USA company.

Giant said that in Camp Hill last year, residents voted in favor of a referendum to permit alcohol sales. Giant’s store at 3301 Trindle Rd. will be the borough’s first retailer to sell alcoholic beverages.

For the past couple of months, associates have been working to transform the Camp Hill store to accommodate the Beer & Wine Eatery, including relocating seating areas and the nutritionist’s office to house the new products, according to Giant. The staff also has undergone training on the expanded beverage offerings so they can better assist customers.

Giant is marking the Beer & Wine Eatery’s grand opening on Friday with beer and wine tastings for customers from 5 p.m. to 7 p.m.

“We are so excited to open the new Beer & Wine Eatery. It’s a natural fit for our Camp Hill store, and our customers have been looking forward to this day,” Denny Betson, manager of the Camp Hill Giant store, said in a statement. “Thanks to all of our associates who worked so hard to get us ready just in time for holiday festivities and summertime celebrations.”

The Beer & Wine Eatery will carry hundreds of domestic, imported and craft beers as well as what Giant called “an immense wine selection.” The outlet also will offer a “mix-a-six” option that enables customers to create custom six-packs from a variety of craft beers.

On the food side, the 48-seat eatery will feature a range of eat-in and takeout selections, including sandwiches, wraps, subs, salads, sushi, Panda Express Chinese food and a DiBruno Brothers Cheese Shop. Hours for the eatery are 7 a.m. to 10 p.m. from Monday to Saturday and 9 a.m. to 10 p.m. on Sunday.

Beer & Wine Eatery locations are found in both Giant and Martin’s Food Markets stores in Pennsylvania. The retailer noted that it enforces a 100% proof-of-age policy for beer and wine sales.

Also this week, Giant announced a $22 million investment in Lancaster County, led by the launch of a new e-commerce hub at its former North Reservoir St. location in the city of Lancaster. The project also includes four store remodels, lower prices across its eight stores in the county and the opening of a new fuel station at its Lititz store. Giant said the 38,000-square-foot e-commerce hub will feature a unique format, serving as a grocery delivery center as well as a curbside pickup site in which online orders will be brought to customers waiting in their cars. The hub also will have a walk-up area for picking up online grocery orders.

"We're seeing double-digit growth in online ordering and grocery delivery," said Giant president Nicholas Bertram. "We are rededicating ourselves to the Lancaster market, and we want this cutting-edge facility to be unique, something the Northeast neighborhood will be proud of while we meet this demand. We're excited because the e-commerce hub will allow us to increase capacity quickly."

Giant said the Lancaster e-commerce hub will enable the chain and Peapod to serve up to 40% more shoppers. The other four e-commerce facilities are in Camp Hill, Coopersburg, North Coventry and Willow Grove, Pa.

"Grocery shopping is changing, and the pace is accelerating," Bertram added. "Our e-commerce hub will drive growth while helping our customers to shop how they want, when they want and, most importantly, where they want."

The store remodels, now completed, include three Giant locations in Lancaster and one in Lititz. The chain said it expanded the stores’ product selection with a broader array of fresh produce, meat and seafood, including a new service meat and seafood destination case. Expert associates staffing the service counter can answer customer questions as well as give cooking recommendations on the beef, chicken, pork, lamb, veal, shrimp, fish and specialty items on display in the case.

At the Columbia Avenue store in Lancaster and the store in Lititz, an expanded deli department features new hot food and cheeses for busy families, Giant said. The selection includes a wider variety of grab-and-go items and pre-sliced deli meats and cheeses. The latter are sliced fresh daily and available for customers to pick up without waiting in line, the retailer noted.

Enhancements at the Giant location on Lititz Pike in Lancaster include a new cheese shop, a Chef Prepared case with ready-to-eat meal solutions, an Asian hot bar and a produce juicing station near the store entrance.

All four of the remodeled stores, too, sport a new look in the health and beauty care departments, along with an expanded product assortment and new LED lighting.

In tandem with the store upgrades, Giant said it has reduced prices on thousands of products — especially store-brand items — in produce, meat, deli, grocery, dairy, frozen food and HBC. The stores are offering savings up to 35% on staple items such as Giant-brand pasta, ground beef, shredded cheese, waffles, canned beans, family cereals, aluminum foil, sandwich bags and organic yogurt, among other products, in addition to select national-brand items.

"We're committed to bringing more value every day to our Lancaster customers, so we zeroed in our most popular products that families purchase every week," Bertram stated. "We also encourage our customers to download the Giant app, which provides additional personalized savings and coupons."

Meanwhile, Giant has broken ground on a new off-site fuel facility in Lititz, near its store at 1008 Lititz Pike. The facility is slated to open in August and will bring another fuel-up location for customers. Other Giant fuel stations in the county are in Lancaster, Ephrata, Mount Joy and Elizabethtown.

Giant said the investment in Lancaster comes in addition to a $70 million plan, unveiled in April, to expand its store network across Pennsylvania. That effort includes the opening of six new stores, two remodeled locations and four new fuel stations over the next two years. The project also will bring Giant into East Stroudsburg and Walnutport, Pa.

Learn more about online grocery shopping/delivery and meal solutions at the inaugural SN Summit, held Oct. 1-3 in Dallas, the only conference where food retailers and restaurateurs learn from each other.
TAGS: Online Retail
0 comments
Hide comments
Recommended Reading