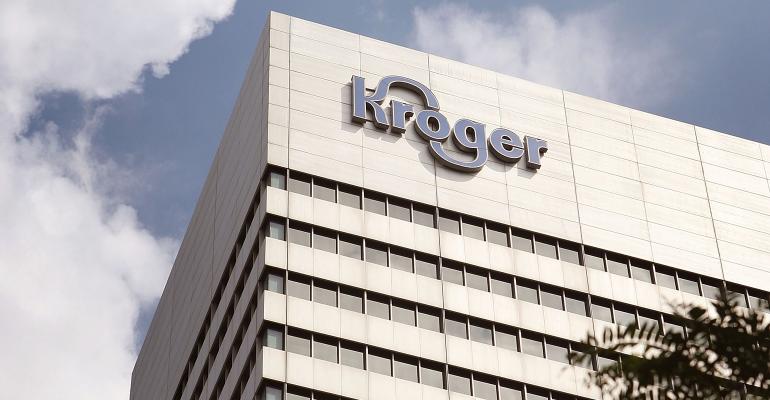 Kroger Co. said it expects margin pressure to squeeze earnings in 2018 as the company continues to invest in its Restock Kroger initiative.

The Cincinnati-based retailer on Thursday reported sales and earnings for the fourth quarter and year that met analysts’ expectations, but the company saw its share price fall as investors fretted over the outlook for the year ahead.

The company said that because of the benefits of tax reform, it would accelerate its investments in Restock Kroger, which involves a range of data-driven merchandising initiatives and spending on higher wages and other employee benefits, among other efforts. The company said that some investments that had been planned for future years would be made this year instead, although the benefits won’t be reflected in improved margins until next year and the year after.

“Operating profit margin dollars will likely be down in 2018, and we're going to pull dollars forward out of 2019 and 2020, where the margin dollars should be higher,” said Michael Schlotman, executive VP and chief financial officer, in a conference call with analysts.

The company said it expects to boost operating margin dollars by $400 million over the next three years.

Gross margin is also expected to decline in 2018, the company said, as it continues to invest in pricing as necessary.

“We’re not going to lose on price, but we’re not out there trying to lead the market down,” said Rodney McMullen, chairman and CEO.

The company also said it plans to invest in training and education of workers rather than offering one-time bonuses.

The company said it plans to allocate the benefits of tax reform evenly across three areas — its employees through wages, benefits and training; its customers through pricing, convenience and the in-store experience; and shareholders through improved profitability.

McMullen said the company was developing an “industry-leading education offering” for workers. Unlike other companies that have announced bonuses for employees from the tax windfall, Kroger will not use any of the return for such one-time payments, he said.

Kroger reported net income of $854 million in the fourth quarter after an income-tax benefit of $957 million. Net income was also impacted by several one-time charges, including the termination of a pension plan and a goodwill impairment charge for the specialty pharmacy business. The company said adjusted net income totaled $562 million, up 11.1% over year-ago results. Adjusted for the extra week in the recent quarter, net income declined slightly from a year ago, to $483 million.

Gross margin for the quarter fell 31 basis points, however, excluding fuel, an inventory accounting charge and the extra week. The company said operating, general and administrative costs (OG&A) increased by 22 basis points in the quarter, about half of which was due to increased investments in labor in the form of higher wages and added ClickList employees to support the company’s online shopping initiative.

Capital expenditures are expected to total $3 billion in 2018, even with 2017 spending.

Other initiatives planned for the year include the addition of Scan, Bag & Go mobile self-checkout technology to an additional 400 stores and the ongoing expansion of click-and-collect and delivery. Kroger currently offers click-and-collect services at 1,091 locations and has more than 872 locations that offer delivery.

The company also plans to invest in the promotion and expansion of its private labels, particularly its top three brands — Kroger, Private Selection and Simple Truth. In 2017, private label sales totaled $20.9 billion, including $2 billion in the Simple Truth line. In the fourth quarter, private label accounted for 29.5% of unit sales and 26% of dollar sales, excluding fuel and pharmacy.