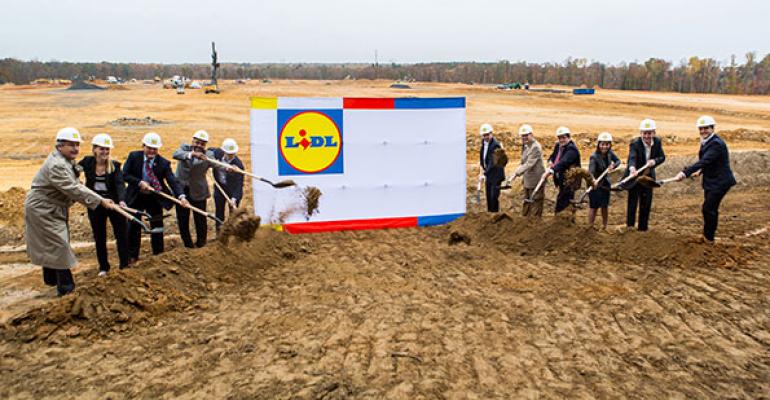 Officials of Arlington, Va.-based Lidl US — the newly established division of the Necksalem, Germany-based retailer Schwarz Group — participated in a groundbreaking ceremony along with state and local officials Tuesday.

Plans for the facility, which will employ 200 and serve a wave of stores expected to open no later than 2018, were announced in June.

“We are tremendously excited to break ground on this facility in Spotsylvania County,” Brendan Proctor, president and CEO of Lidl US, said in a statement. “We chose Spotsylvania not just for its central location, but also for its talented workforce and economic vitality.

"We look forward to being part of this community and to introducing residents to a unique shopping experience that will be unlike anything else in the market. We thank Governor Terry McAuliffe and local leaders for their support throughout this process. They have been tremendous partners to bring Lidl to the area.”

Lidl operates nearly 10,000 stores in 26 countries throughout Europe, offering customers what it calls the highest quality fresh produce, meat, bakery items and a wide array of household products at the lowest possible prices.

In addition to the Spotsylvania facility, Lidl will soon open the company’s U.S. headquarters in Arlington County, Va. In total, Lidl is investing more than $200 million in its operations in Virginia and has pledged to create 700 new jobs in the state by 2018.

"I am thrilled to be a part of this groundbreaking event for Lidl's regional headquarters and distribution center," Maurice Jones, Virginia secretary of Commerce and Trade, said. "As one of the leading European retailers, we are happy Lidl chose Virginia as its gateway to the United States. Lidl's investment is a great testament to the outstanding talent, strong infrastructure and pro-business climate in Virginia. We look forward to continuing this great partnership with Lidl."