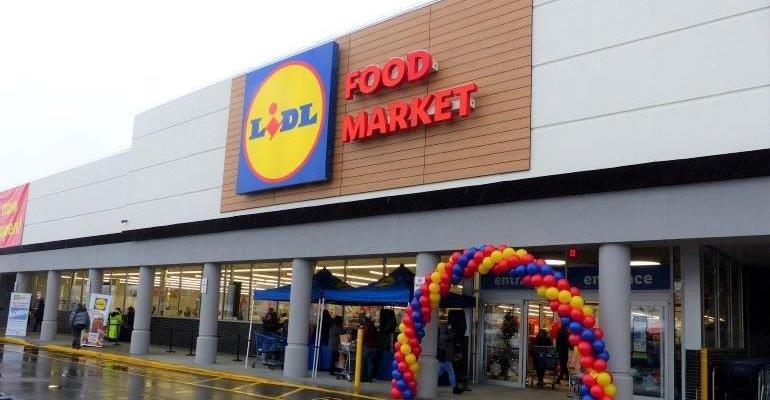 Russell Redman
Lidl pushed competitors in the crowded Long Island, N.Y., retail grocery market to cut prices as much as 15% since opening its first stores in the region in December 2019.
News>Retail & Financial

Hard discount supermarket chain Lidl pushed competitors in the crowded Long Island, N.Y., retail grocery market to cut prices as much as 15% since opening its first stores in the region in late 2019, according to a new study by the University of North Carolina Kenan-Flagler Business School.

Lidl opened the first of its currently four Long Island stores in December as part of its 2018 acquisition of Bethpage, N.Y.-based Best Market, which had 24 Long Island stores. So far, four other Lidl store locations have been announced, which would give the retailer two stores in Long Island’s Nassau County and six in neighboring Suffolk County.

Prices collected in the research, commissioned by Lidl US, came from visits to 27 stores between April 2019 and March 2020. ShopRite, a major supermarket competitor and grocery price leader on Long Island, wasn't included in the final study due to technical issues in collecting reliable data, according to Gielens.

“This price pressure effectively resulted in retailers cutting up prices by up to 15%,” Gielens said in a press call on Wednesday. “This price cutting effect is substantially greater than what is typically observed in previous academic studies on Walmart's entry in new markets, where price decreases typically vary by between 1% and 2.5%, or 5% at most.” 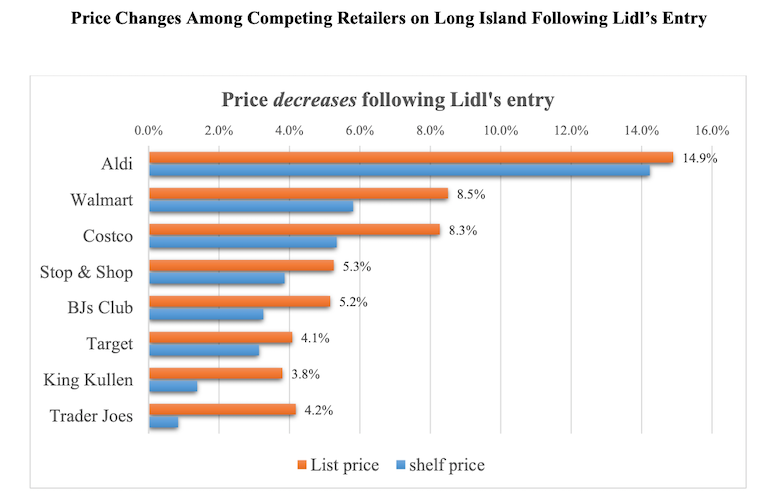 “With less grocery stores open and less competition in fall 2019, retailers on Long Island increased the prices significantly,” Gielens explained. “After Lidl entered the market, these price increases were completely wiped out.”

In direct comparisons with Long Island retailers in March 2020 — before the coronavirus pandemic caused supply shortage — Lidl had a sharp edge in pricing, the study showed. The average price advantage at Lidl was 44.9% versus Trader Joe’s, 39.6% versus King Kullen, 33.8% versus Stop & Shop, 18.5% versus Target and 10.4% versus BJ’s. UNC Kenan-Flagler noted that Lidl’s pricing advantage versus Aldi, Walmart and Costco were around zero at that time.

“Lidl’s entry does effectively increase the price pressure in the new market, as prices at Lidl were substantially lower compared to competing retailers on Long Island in head-to-head comparisons,” said Gielens. 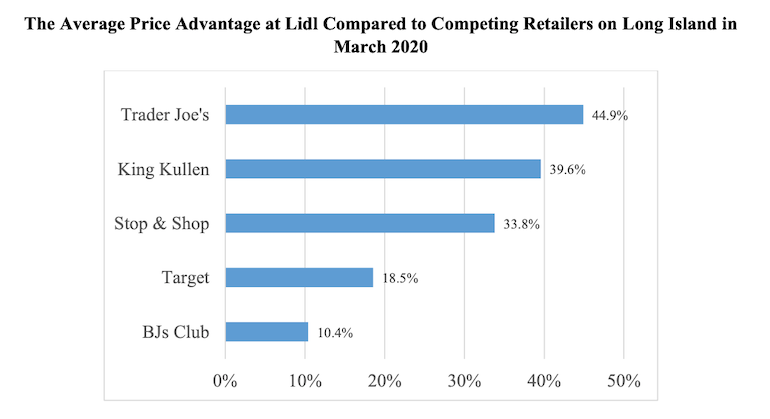 Despite an upward trend of more than 2% in grocery prices between April 2019 and March 2020, grocery retailers on Long Island set prices for individual products, including staple items, substantially lower after Lidl opened new stores, UNC Kenan-Flagler’s research revealed. For higher priced items like frozen seafood, laundry detergent and olive oils, prices decreased 13% to 17%. In staple categories such as pasta, butter and breakfast cereals, prices declined more than 10% to 12%. And for some frequently purchased items, such as refrigerated drinks, peanut butter and frozen pizza, prices were reduced by 8% to 9%. Of the 20 categories examined, price cuts ranged from 5% to 17%.

Gielens, who authored a widely cited 2018 UNC Kenan-Flagler study on Lidl’s price impact in the U.S. market, noted that Lidl’s pricing effect has been far-reaching not just on Long Island but elsewhere in the United States, where the Germany-based retailer opened its first stores in June 2017.

“Lidl’s competitive price cutting effect has shown to be enduring and eliminates observed food price inflation,” Gielens said. “Overall, these findings corroborate the results from the study we conducted in 2018, which showed that Lidl exerted a significant level of pressure on leading retailers in that they set lower prices in markets in which Lidl was present.”

Arlington, Va.-based Lidl US opened its 100th store in May in Suwanee, Ga. At the end of March, Lidl also opened a 700,000-square-foot distribution center and regional headquarters in Perryville, Md. The facility supplies products to stores in Maryland, Delaware, New Jersey, Pennsylvania and New York.