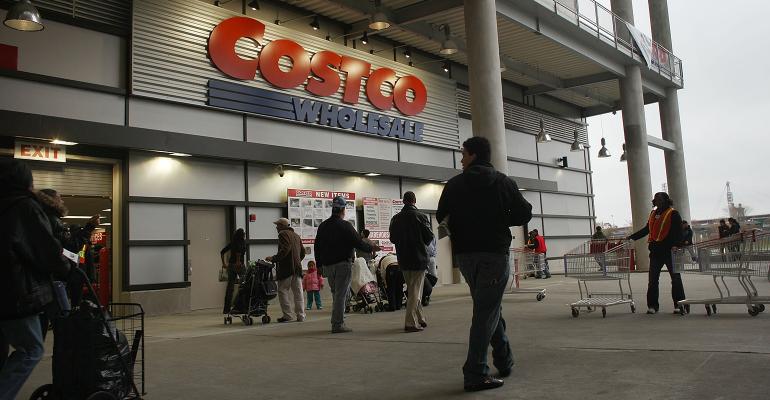 The Issaquah, Wash.-based membership warehouse club said sales for the 16-week quarter, which ended Aug. 28, totaled $35.7 billion, an increase of 2% from the same period last year. In the U.S., comparable store sales declined by 1%, but were up by 2% excluding foreign exchange rates, gasoline and deflation. Net income for the fourth quarter was $779 million, or $1.77 per share, a 1.6% increase from last year. Analysts had been anticipating Costco would post EPS of $1.73.

In a conference call discussing results late Thursday, Costco CFO Richard Galanti said the chain's switch from accepting only American Express cards to only accepting a co-branded Visa card overcame a glitchy June launch but is proving popular with shoppers — who have more opportunities to earn rewards with the card — and more efficient for the company.

"The new card is fantastic for our members ... and it's also great for us in terms of driving member value in sales over the next years and, of course, lowering our effective cost of accepting credit and debit cards," Galanti said.

Approximately 11.4 million American Express co-branded cards representing about just under 7.5 million accounts were transferred over to Citi during the conversion, Galanti said. More than 85% of transferred accounts have now been activated for Costco, and more than 1.1 million members have applied for the new card, he said.

Echoing the remarks of other food retailers, Galanti said Costco experienced significant food price deflation, particularly in proteins, during the quarter. Based on remarks from suppliers, Galanti estimated that such conditions could continue for another six months. In the last month, he said, the price of almonds was down 38% from the same period last year and whole eggs down by 54%. "Those things, particularly things like eggs really add up," he said.

He added however that organic sales were up by 20% at Costco during the year, although some of those sales cannibalized conventionally grown counterparts. "It's the perfect item for us, because it's our member."

Asked about competition from Amazon, Galanti said the company was making slow progress in e-commerce but maintained Costco's value proposition "is best served for us when it's in-store getting our members to come in and buying when they can see everything there that we have," particularly in food.

"On the fresh food side, we're glad that fresh is difficult," he added. "We don't believe that everybody's going to just have everything delivered, but we've got to work hard to make sure they want to come and see it."

For the fiscal year, net sales totaled $116 billion, an increase of 2%, with U.S. comps up by 1%, or 3% when adjusted for gasoline and foreign exchange rates.