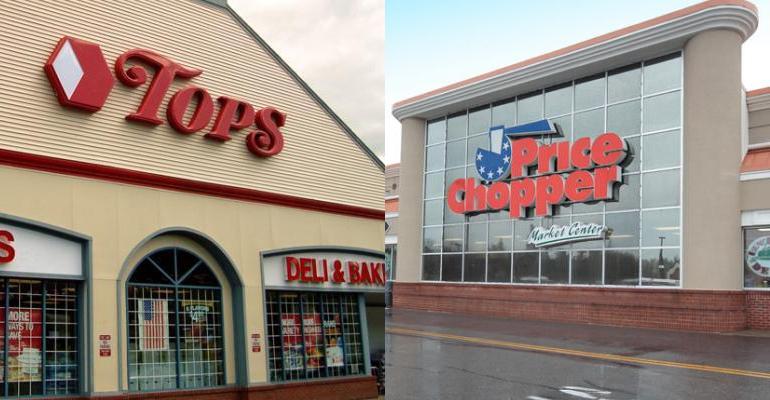 Financial terms of the deal, announced Monday, weren’t disclosed. Plans call for Scott Grimmett, president and CEO of Schenectady, N.Y.-based Price Chopper/Market 32, will serve as CEO of the merged company and on its board of directors, overseeing the operations of 292 Price Chopper, Market 32, Market Bistro and Tops Markets stores in New York, Vermont, Connecticut, Pennsylvania, Massachusetts, and New Hampshire. Frank Curci, chairman and CEO of Williamsville, N.Y.-based Tops, will serve on the combined company’s board and as a consultant to aid in the transition.

With more than 30,000 employees, the new parent company will be based in Schenectady, Price Chopper and Tops said. Both supermarket chains will retain their main offices in Schenectady and Williamsville and continue to be managed locally by their respective leaders.

“This merger marks a major step forward and collectively elevates our ability to compete on every level,” Grimmett said in a statement. “It leverages increased value for our customers; advances shared opportunities for innovation; fortifies the depth of our workforce, community and trade partnerships; and ultimately accelerates our capacity to deliver a distinctively modern and convenient shopping experience. Given the vital role that supermarkets and their workforces play in our communities, particularly this past year, I am excited to lead the parent company of these two historic grocery retailers.” 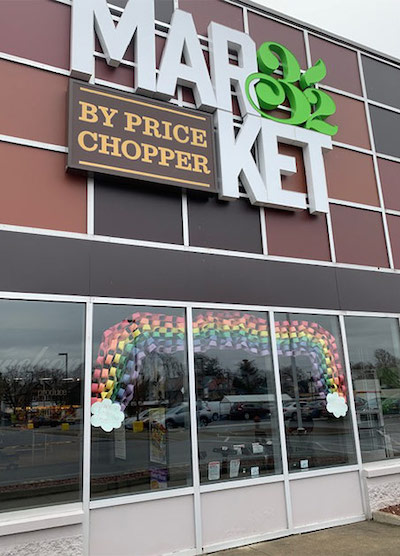 Price Chopper has been converting stores to the upscale Market 32 banner under a plan unveiled in 2014. (Photo courtesy of Price Chopper)

"We have long believed that this merger makes sense both strategically and based on the similar ways in which we each put customers first, go to market and treat our people,” Curci stated. “We look forward to working closely with the Price Chopper/Market 32 team and together becoming an even stronger competitor with more scale, as we continue serving our customers and communities.”

“Tops has always put serving customers and providing an exceptional shopping experience at the center of everything we do, and this merger is no different,” Persons commented. “Our associates, who take pride in their work and recognize the importance of the role they play in taking care of customers and communities, will continue to be the backbone of our company.”

Price Chopper and Tops said they expect to close the merger transaction in the coming months, pending regulatory approval and customary closing conditions.

“I’ve seen tremendous change in our industry across my 65-year career and have long been an advocate for the promise of innovation and partnership, like that which has driven this merger forward,” Neil Golub, executive chairman of Price Chopper/Market 32, said in a statement. “I can assure you that our commitment to sustaining and improving the communities in which we operate remains steadfast.”

“As Amazon/Whole Foods, Walmart/Sam’s, Target, Costco, BJ’s, Aldi, Dollar General, Dollar Tree/Family Dollar, Walgreens, CVS and Ahold/Hannaford continue to use their enormous size and very low cost of capital to make extraordinary investments in their powerful, ubiquitous store and online grocery ecosystems, it is ever more critical for regional grocers to build the scale required to enable them to also invest in price, people, marketing, technology and growth, albeit far less given their relative size,” Scott Moses, managing director and head of food retail and restaurant investment banking at PJ Solomon, said in an email on Monday. “This transaction is a clear reflection of that imperative. It has been a true honor to help these two local pillars, both beloved for generations and based in my home state of New York, to enhance their ability to continue to serve their teams, customers and communities across the Northeast, particularly after the heroic service they have provided over the past year.”

The merger combines a “totally union operator” in Tops Markets with a “totally non-union” operator in Price Chopper/Market 32 parent Golub Corp., according to United Food and Commercial Workers (UFCW) Local One, which said it learned of the deal this morning. Oriskany, N.Y.-based UFCW Local One represents 10,000 Tops employees.

“UFCW Local One members from Tops Friendly Markets are not immune to changing management groups over the past 15 years. They have certainly been on a rollercoaster ride hanging on in fear of what would happen to their job at each management milestone," Frank DeRiso, President of UFCW Local One, said in a statement. “Through all these changes of management, a bankruptcy and a global pandemic, our members have continued to provide their customers with superior service.”

Overall, the union has 16,000 members in the food and drug retail, food processing, transportation, hospitals and nursing homes in upstate New York and northern Pennsylvania.

“Our collective bargaining agreements are in full effect and have years left before they expire. We will be bargaining with Tops on the Adirondack stores very soon and expect no issues,” noted DeRiso. “We will use every legal measure to make sure our members are treated fairly, and we look forward to working with the new management, as we always have, to ensure of members have stable employment.”