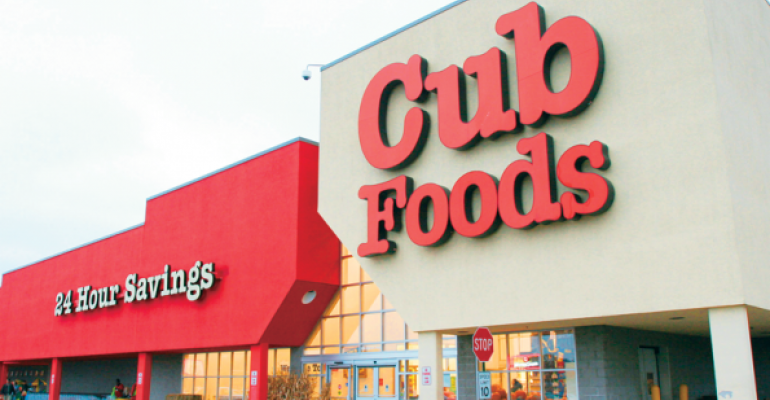 Retail a concern as Supervalu falls short in 1Q

&quot;Any and all options are on the table. That&#39;s the work we have in front of us.&quot;&quot; &mdash; MARK GROSS, Supervalu

Analysts reviewing Supervalu's first-quarter financial results on Wednesday appeared willing to buy an opportunity story in its wholesale division and the potential of new sales initiatives at Save-A-Lot, but concern lingered for the company's struggling conventional retail banners.

All three divisions experienced challenges in the quarter, as the Minneapolis-based company reported sales and earnings that came in below analyst expectations and triggered a stock price dive of more than 12%.

Officials of the company maintained an optimistic outlook despite a 4% decline in revenues in the quarter, citing the recent gain of the Marsh Supermarkets wholesale account and promising results from new initiatives at the discount Save-A-Lot banner. By themselves they weren't enough to overcome challenges including prolonged and more severe deflation than anticipated and some customer exits from the wholesale business.

Retail in the meantime saw quarterly comps decline by 4.5% — an acceleration from a 3.9% drop in the fourth quarter — despite pricing and promotional investments at owned banners Cub Foods, Farm Fresh, Hornbacher's, Shoppers, and Shop n' Save.

Some analysts in a conference call discussing results pressed CEO Mark Gross on the retail struggles in particular, asking whether Supervalu would consider a plan to "creatively divest" them.

"Any and all options are on the table," Gross replied. "That's the work we have in front of us."

John Heinbockel, the Guggenheim Securities analyst who pressed Gross on the matter, in a research note Wednesday said Supervalu's wholesale weakness — sales were down 8% in the quarter — would likely ease in coming months, citing the Marsh win and the recently announced acquisition of 22 Food Lion stores to be distributed among whole customers.

"We are more concerned about the traditional retail business, whose comps fell 4.5% with EBITDA off 31%," he noted. "This is a less differentiated business in a competitive sector — there is no panacea here."

Gross said Supervalu's approach to improving retail was investing behind "elements of customer satisfaction" including the operations and the offering.

"In our conventional retail, it's like other retailers making that better offering particularly in deli and bakery, better fresh, better healthy, some additional prepared foods to make that ease of meal preparation, and then there is price. And, it's three of those elements. We're finding: hey, you have to do all of that to succeed in this business."

Gross previously outlined five initiatives designed to improve results in retail, including a program of lower prices and more aggressive promotions which are underway at the banners but not yet translating to shoppers. "Experience tells us that it takes time to see behavioral changes in household shopping patterns and we are hopeful that these investments ... will have a positive impact as we move through the year."

He said changes to staff that would improve store conditions only became fully deployed toward the end of the quarter but said the changes would result in improved store conditions. New merchandising initiatives in deli and bakery —primarily assortment and display changes — should be complete by the end of the current quarter, saying that results in pilot stores have seen good results. He said Supervalu would continue to make investments in e-commerce with a combination of click-and-collect and home delivery in about a third of its 200 retail stores by year-end.

Finally, he said, the company intends to better tailor assortments in stores based on income and ethnic profiles of shoppers.

Again when pressed, Gross said the company would "prefer to put capital where it would be best deployed and I think the opportunities are greatest in wholesale."

The former C&S Wholesale deal maker outlined lots of opportunities to win new business there. "It's a big country," he said.

"There's a world of retailers who self-distribute. So there's the opportunity to come in and have them focused on what they do best, which is as being merchants and in running their stores and turning distribution over to us," he said. "There is a world of organizations that together cooperatively do their own supply where we could again be the supplier to them — and by supplier, I mean both in products and services. And then, there are those who may be supplied by others, who would be better served by being supplied by us. All three of those are opportunities for us."

Eric Claus, CEO of Save-A-Lot, said estimated 5% price deflation during the quarter impacted sales, which were up the quarter by 1.7% to $1.43 billion, but comps fell by 1.3% and operating earnings down significantly.