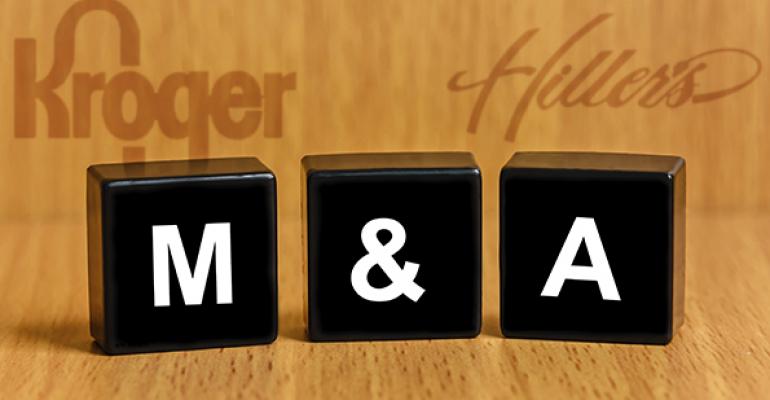 Kroger Co. SVP and CFO Michael Schlotman pointed to challenges for large retailers engaged in a merger during a panel at the Goldman Sachs Global Staples Summit in New York on Tuesday.

“Whenever those happen on that big of a scale you have to be very careful that you stay focused on the business and the customer and don’t let any disruptions — it’s that duck on the pond, the head always looks pretty calm, but his feet are going fast and that’s how mergers typically are when they’re big like that. You have to make sure that those feet moving that fast doesn’t disrupt what you’re trying to do for the customer,” he said.

Schlotman said customer dissatisfaction resulting from large mergers can be advantageous for Kroger, based in Cincinnati, as can the opportunity to buy assets that the merging companies want to get rid of.

“It’s not to say the last chapter’s written on what assets may be available. As you know they [Safeway] announced nine store closings in Denver yesterday. Those sometimes are the natural falls out from these transactions and in a market like Denver when nine stores close, I can guarantee you there is a King Soopers in close proximately to those stores, and it winds up being good for everybody in the market when there’s a little bit less competition now.”

On the future of industry consolidation, Schlotman said he expects to see more “small deals” like Kroger’s Hiller’s acquisition to bigger deals like the potential Ahold and Delhaize merger and the Safeway-Albertsons merger.

On the organic growth front, Schlotman said Kroger has been eyeing a new market for a long time, but that the focus on the Harris Teeter merger slowed down entering the new market.