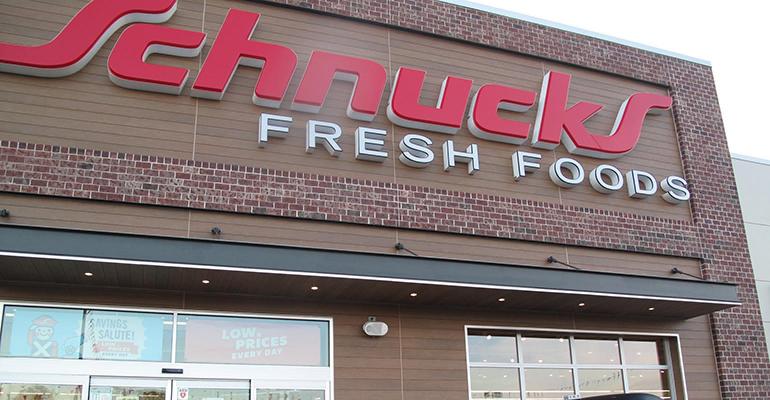 Schnuck Markets
After closing its only store in Iowa, Schnucks will operate 111 stores in Missouri, Illinois, Indiana and Wisconsin.
News>Retail & Financial

Schnucks to close its only Iowa store

CEO Todd Schnuck says location ‘has simply not been profitable’

Schnuck Markets plans to shut its only store in Iowa, which will reduce its Midwestern market area to four states.

Schnucks said its 61,000-square-foot supermarket in Bettendorf, Iowa, located at 858 Middle Road, is slated to be closed at 6 p.m. on Aug. 16. The St. Louis-based grocer described the location, opened in May 2005, as underperforming. The chain’s other 111 stores are in Missouri, Illinois, Indiana and Wisconsin.

“Our teammates have put forth a great effort and have been proud to contribute to the Bettendorf community. Unfortunately, the store has simply not been profitable,” Schnucks Chairman and CEO Todd Schnuck said in a statement. “While this was not a decision we made lightly, we know our teammates’ contributions — as individuals and as a team — will be long remembered among their loyal Schnucks customers in the area.”

All of the Bettendorf store’s 80 employees will be offered transfers to other Schnucks locations. Workers choosing to transfer will retain their same pay rate, while those electing not to transfer will receive a severance package, the company said.

Schnucks noted that customers of the Bettendorf store will continue to earn Schnucks Rewards points until July 21, and they will be able to redeem accrued points through Aug. 16.

The Bettendorf store’s pharmacy previously had been closed and its prescription files transferred to CVS Pharmacy, which acquired Schnucks’ retail and specialty pharmacy business in March. As part of the transaction, CVS bought 99 Schnucks retail pharmacies to convert to the CVS banner and purchased prescription files from another 11 Schnucks pharmacies and transferred them to nearby CVS Pharmacy stores.

In April, Schnucks said it plans to permanently close a supermarket in Alton, Ill., after it was temporarily shut amid the company’s response to the coronavirus pandemic. The retailer’s Oakwood store at 1721 Homer Adams Pkwy. in Alton won’t be reopened after its lease expires in June.

Also this summer, Schnucks plans to open a new-concept store — EatWell, A Natural Food Store by Schnucks — in Columbia, Mo. A former Lucky’s Market, purchased by Schnucks in a bankruptcy auction, the 42,000-square-foot store is being remodeled for the new format.