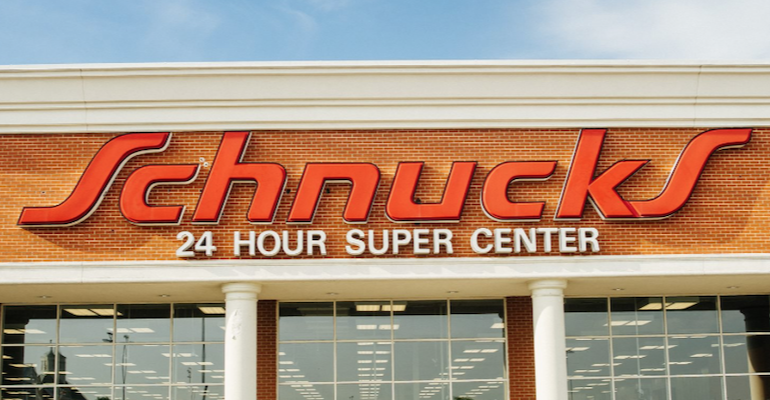 EatWell, A Natural Food Store by Schnucks, set for Columbia, Mo., this summer

While natural retailers like Lucky’s Market and Earth Fare have fallen on hard times in 2020 —both chains filed for bankruptcy earlier this year — one traditional grocer is making the move into the natural and organic space.

Schnuck Markets Inc. today announced it is introducing EatWell, A Natural Food Store by Schnucks, a new store format in Columbia, Mo., focused on consumers prioritizing health and wellness, natural foods “and the occasional splurge,” according to the company.

Related: Schnuck Markets ‘rounds up’ at the register for coronavirus relief

Schnucks’ EatWell store will open in early summer 2020 at 111 South Providence Road in Columbia at a former Lucky’s Market purchased by Schnucks during a bankruptcy auction earlier this year. Schnucks is currently remodeling the 42,000-square-foot store in preparation for the new format.

Schnucks said the new store format (rendering above) will focus on consumers prioritizing health and wellness, natural foods “and the occasional splurge.”

EatWell will be the second Schnucks-owned store in Columbia. The Schnucks supermarket at 1400 Forum Blvd. employs 110 teammates and will continue to provide traditional grocery offerings as well as Schnucks exclusive signature items.

“We’re celebrating 50 years of serving Columbia customers, and their loyalty over these last five decades makes this a perfect place for Schnucks to try something new with our EatWell store,” said Schnucks chairman and CEO Todd Schnuck. “Our mission as a company is to nourish people’s lives and we’re excited to be able to build on that mission by launching a store where it’s easy to make healthier choices, while still also being able to pick up a few decadent treats for those special occasions that may be worth the extra calories.”

In addition to offering natural food items, the neighborhood store will also include a focus on organic and local items, and feature a natural living department in which associates can assist customers with choosing options that fit a healthy, balanced lifestyle.

EatWell will employ approximately 80 teammates, most of whom have already joined the company from Lucky’s, though there are still jobs available. Those seeking work can apply now at www.schnucks.com/careers, and select “Central Missouri” under “Location Group” for available positions.

St. Louis-based Schnuck Markets, which operates 112 supermarkets in Missouri, Illinois, Indiana, Wisconsin and Iowa, has a tradition of focusing on health and wellness. The company launched the “Eat Good to Feel Great” program earlier this year in which Schnucks partners with health-focused brands to set up in-store signage and displays that make it easier for shoppers to find better-for-you product choices.

In March, Schnuck Markets sold its retail and specialty pharmacy businesses to CVS Health, which will operate the supermarket pharmacy locations under the CVS Pharmacy brand.

Ups and downs for natural retailers

Schnucks’ entry into the natural foods market comes at a time of ups and downs in the segment. Lucky’s Markets reported on Jan. 21 that it was shutting 32 of its 39 stores and filing for Chapter 11 bankruptcy protection to facilitate the sale of its remaining locations and assets. As part of a court-supervised auction, Lucky’s sold 23 stores and its distribution center for about $29 million to 10 winning bidders, including its founders and Publix Super Markets, Aldi, Southeastern Grocers and Dollar General — as well as Schnucks, which purchased the Columbia property with an $860,000 bid in March.

In February, Earth Fare, the Asheville, N.C.-based operator of 50 natural and organic stores, filed for Chapter 11 bankruptcy protection in federal court, and announced that it was selling off its assets and going out of business.

At the other end of the spectrum, natural retailers Sprouts Farmers Market and Natural Grocers have been experiencing banner years, even before the sales surge of the coronavirus impact.

For the quarter ended March 29, net sales at Sprouts climbed 16.1% to $1.65 billion from $1.41 billion a year earlier. The Phoenix-based specialty grocer attributed the hefty gain to a 10.6% increase in comparable-store sales and a strong performance by newly opened stores, as well as a late-quarter spike as the coronavirus crisis escalated.

The elevated sales continued into April, but not at the same level as in March; still, April same-store sales rose 7.2% year over year.

Meanwhile, Lakewood, Colorado-based Natural Grocers — a chain of 158 natural and organic food stores in 20 states — saw similar results for the first quarter, which ended March 31, with net sales growing by 20.4% to $277.5 million. Comparable-store sales increased 17% and mature-store comparable sales rose 15.4% during the quarter, the company reported. It’s the 12th consecutive quarter that Natural Grocers has reported sales growth. The chain saw comparable-store sales growth of 40% in March with the onset of the coronavirus outbreak in the United States and subsequent surge in grocery sales.