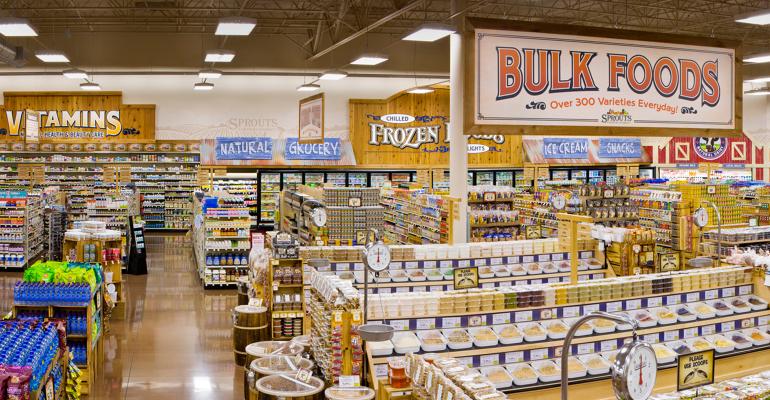 The Phoenix-based natural foods retailer made the announcement in advance of a presentation for investors scheduled Thursday in New York.

Sprouts said Wednesday that comparable-store sales in the fiscal third quarter are expected to be flat vs. the same period last year. When reporting second-quarter financials a month ago, Sprouts had forecast 3% to 4% comp growth. Sprouts also slashed its expectations of comp growth for the fiscal year from a range of 3.5%-4.5% to 1.5%-2.5%.

Sprouts in a statement said "the prolonged deflationary environment, competitive landscape and industry dynamics have prompted heavy promotions across the industry, adversely impacting retail deflation and traffic generation." Those dynamics appeared to have worsened in recent weeks, as the quarter began July 4, and guidance was announced Aug. 4.

The rougher environment is also expected to impact earnings, Sprouts said, adjusting its annual earnings-per-share guidance to a range of 83 to 86 cents, from previous calls of 92-94 cents.

“At Sprouts, we have operated and managed through similar competitive and deflationary periods,” Amin Maredia, CEO, said in a statement. "Our team remains laser focused on accelerating traffic and sales in the current environment, while continuing to execute our strategic business plan to build long-term value.”

Sprouts on Wednesday also announced its board had authorized the company to purchase up to $250 million in its stock through December. The authorization, which replaces a $150 million repurchase authorization that ended in July, represents approximately 7.4% of the common shares outstanding at its $22.81 closing price Tuesday.