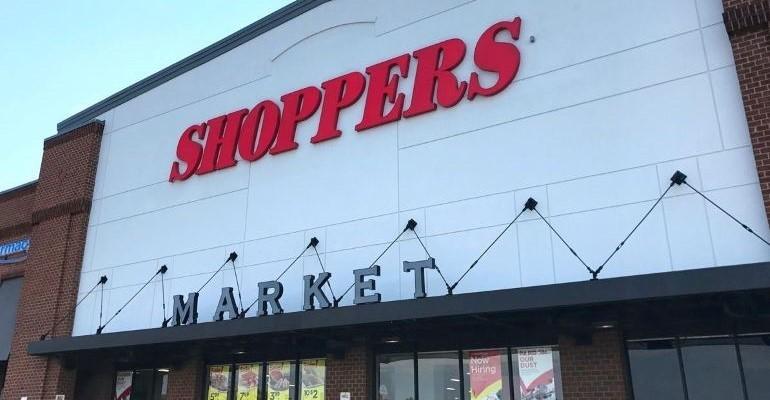 Shoppers Food & Pharmacy
United Natural Foods Inc. will have 26 Shoppers supermarkets after 13 of the banner's locations are sold and another four are closed.
News>Retail & Financial

Sales of the stores — 12 in Maryland and one in Virginia — are expected to be finalized between mid-December and the end of February 2020, pending customary closing conditions, UNFI said. Plans call for Shoppers to wind down operations at those stores, sell off any remaining inventory and shut them before they reopen under other banners.

An UNFI spokesman said Friday that the grocery retailers purchasing the Shoppers stores have asked not to be named at this time. As part of the transactions, two of the buyers will enter into long-term agreements for UNFI to serve as the primary supplier for those locations under their new banners.

Of the Shoppers locations being closed — in Alexandria and Manassas, Va., and Baltimore and Severn, Md. — three locations are lease non-renewals and one is a lease cancellation under an agreement with the landlord, Providence, R.I.-based UNFI said.

"Today's announcement reflects progress on our commitment to reduce UNFI's retail footprint and marks another step toward transforming UNFI into North America's premier food wholesaler," UNFI Chairman and CEO Steven Spinner said in a statement. "We believe that exiting the retail business will further accelerate our business transformation and allow us to more appropriately allocate resources toward long-term growth initiatives."

"We will continue to wind down our retail footprint in a strategic and thoughtful manner to achieve the goals previously outlined,” Spinner added. “As we do this, we greatly appreciate the loyalty of our associates and the tremendous service they have provided to our customers."

Excluding the Shoppers locations being sold or closed, UNFI has 78 corporate-owned supermarkets, including 52 Cub Foods stores in Minnesota and Illinois. In October, Spinner said UNFI was working on multiple deals to sell the Shoppers stores and that the company expects to fully divest both Shoppers and Cub during fiscal 2020. A potential deal for Cub would include the chain in its entirety and exclude the banner’s 29 franchised stores.

“At Cub, we are also in a process and expect to have something to announce early in calendar year 2020 as well,” Spinner said in a conference call on UNFI’s fiscal 2019 results. “In the interim, we're pleased with Cub's results and the work being led by a new leadership team within that organization.”

Supervalu already had begun selling off its retail grocery business when UNFI closed its $2.9 billion acquisition of the company in October 2018. Most recently, in late December, UNFI sold the Hornbacher’s chain to Coborn’s Inc., at the time leaving the distributor with 104 retail stores under the Cub and Shoppers banners. Last year, Supervalu sold most of its Farm Fresh stores to Harris Teeter, The Kroger Co. and Food Lion and most of its Shop ‘n Save stores to Schnuck Markets. Ahold Delhaize USA’s Giant/Martin’s grocery chain also acquired five Shop ‘n Save stores.

United Food & Commercial Workers (UFCW) Local 400 in Landover, Md., said Friday that UNFI’s announcement on the 17 Shoppers stores to be sold or closed caught it by surprise. This past summer, the union had held rallies at Shoppers stores over concerns about grocery workers jobs amid UNFI’s efforts to divest its retail business. UFCW, which represents workers at some of the 17 stores, said about 1,100 employees will be impacted by the store sales and closings.

“This morning, we were shocked to learn that UNFI plans to sell or close 17 of its remaining Shoppers stores in the next few weeks. We were shocked because this announcement has come after more than a year of silence from the company on its plans. Since UNFI acquired Shoppers, we have requested, insisted and demanded to be given information on the fate of these stores. In response, we have been met with cold indifference,” UFCW 400 President Mark Federici said in a statement Friday. “Now, in the midst of the holiday season, the company suddenly informs workers at 17 locations that their livelihoods are at risk. Even now, UNFI continues to refuse to provide any assurance to workers that their families will be taken care of after these stores are sold or closed,” he added.