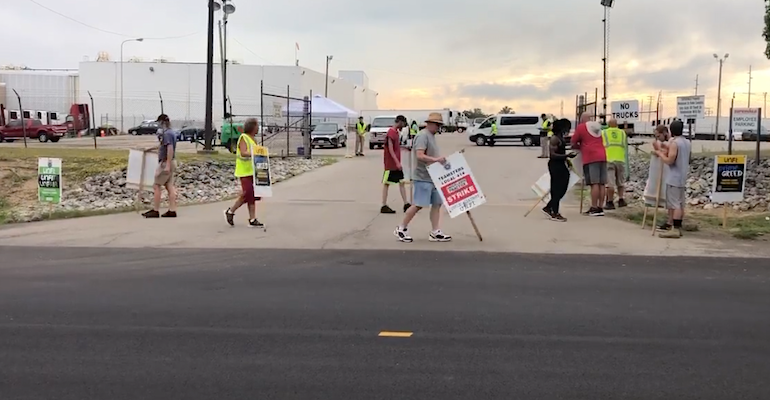 After a strike lasting just over a week, United Natural Foods Inc. (UNFI) has reached a contract agreement with Teamsters Local 414 at its Fort Wayne, Ind., distribution center.

Fort Wayne-based Teamsters 414 ratified a new four-year contract in a unanimous vote on Saturday afternoon after announcing a tentative agreement on July 29, the union said on its Facebook page.

About 160 of the local’s members — including drivers, warehouse and maintenance workers — took part in the strike, which began July 23. The union claimed UNFI engaged in unfair labor practices by arbitrarily firing two members and said employee members had worked without a contract since August 2019, after more than 40 bargaining sessions.

“We’re very pleased that Teamsters Local 414 has ratified a new long-term labor agreement for our distribution center in Fort Wayne, Ind.,” Jill Sutton, chief legal officer, general counsel and corporate secretary at UNFI, said in a statement on Monday. “UNFI’s four-year contract with Local 414 maintains competitive benefit and wage terms in line with other facilities in the Midwest. The contract also includes language updates that afford UNFI the flexibility it needs to operate and succeed as a competitive distribution business in today’s landscape. We believe this resolution is a positive development for UNFI, our valued associates in Fort Wayne and our customers.”

A key stumbling block in negotiations involved a work rule on how union employees must respond when given a direct order by a UNFI supervisor or manager, according to Teamsters Local 414. In a July 23 memo announcing the strike, the local said it filed an unfair labor practice charge with the National Labor Relations Board in connection with the firing of a Fort Wayne DC worker, when a union steward wasn’t present, for allegedly failing to respond to a supervisor’s order. One other member was fired and another suspended under similar circumstances, the union said. Other issues included wages and health insurance. Overall, Teamsters 414 represents 2,500 members in northeastern Indiana.

“UNFI intends to continue pursuing fair, workable labor agreements that address our associates’ needs while allowing us to effectively serve customers and thrive in the modern food distribution environment,” Sutton added. “We owe it to all of our stakeholders — ranging from associates to customers to shareholders — to reach agreements that position us to adapt and remain nimble. This emphasis on flexibility is one of the main reasons why UNFI was able to quickly implement industry-leading safety and risk management practices tailored to our operations across North America as the COVID-19 pandemic began. Similarly, our focus on associates’ well-being drove the decision to institute a $2 per hour state-of-emergency bonus early in the crisis, even as many other businesses were furloughing or letting go of employees. UNFI’s commitment to maintaining best-in-class safety and risk practices across our distribution network will continue to be universal for the benefit of all associates.”

The strike marked the second work stoppage by Teamsters 414 during contract talks. In December, UNFI and Teamsters Local 414 restarted negotiations after a strike at the Fort Wayne DC led to walkouts at UNFI facilities in Hopkins, Minn., and Green Bay, Wis., whose 850 combined Teamsters members honored the picket lines.