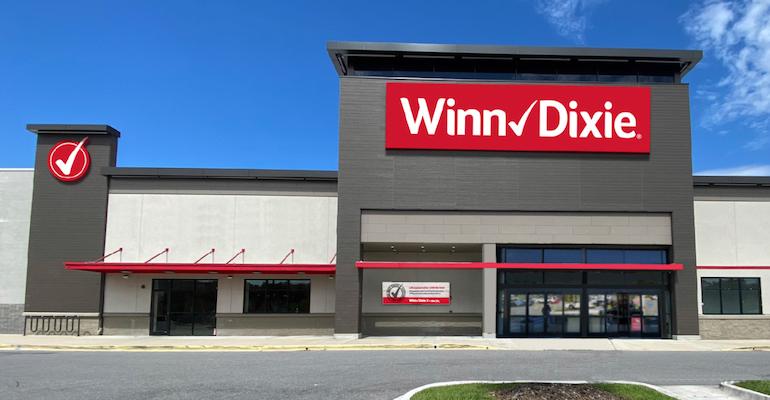 Southeastern Grocers
Plans call for three former Earth Fare stores in Boynton Beach, Jacksonville and Lakewood Ranch and one former Lucky’s Market in Gainesville to open to customers under the Winn-Dixie banner on Nov. 11.
News>Retail & Financial

Next month, Southeastern Grocers plans to reopen the first of eight acquired Earth Fare and Lucky’s Market stores in Florida under the Winn-Dixie banner.

All of the new stores came from lease purchases during the bankruptcy proceedings of Lucky’s Market and Earth Fare, with Southeastern Grocers buying four locations from each chain. The other Earth Fare store purchased is in Viera, while the other three Lucky’s stores acquired are in Fort Myers, Lake Mary and Melbourne. Those locations are slated to open in early 2021, Southeastern Grocers said.

“We are committed to providing an exceptional shopping experience for all of our customers, and we are proud to soon introduce four new Winn-Dixie stores crafted with offerings for our customers’ distinct tastes and preferences,” Southeastern Grocers President and CEO Anthony Hucker said in a statement. “We’ve expanded our product assortments in these new stores to ensure our customers have fresh, quality products at the right price for every meal.”

At the four new Winn-Dixies, customers will find new signature categories plus a wider product selection and more specialty items in each department, according to Southeastern Grocers. The Gainesville store also will house Winn-Dixie’s fifth Taproom, expanding the banner’s “sip and shop” offering.

The expanded varieties of signature items include fresh and dried peppers, tomatoes and mushrooms, and an assortment of tropical fruits and berries across new “farm fresh” produce departments, along with specialty cheeses, take-and-bake pizzas, fresh sushi and other grab-and-go meal options in the deli departments, Southeastern Grocers said. The full-service meat departments will feature 12 flavors of fresh-made specialty sausages and cuts of Certified Angus Beef, which the retailer said are inspected for marbling, maturity, sizing, quality and tenderness to meet 10 standards more selective than USDA choice and prime beef.

Other amenities include new seafood departments with locally caught selections, such as Florida Keys lobster and Florida stone crab and shrimp; fresh bakeries offering artisan-baked bread, pastries and desserts; and specialty foods for various dietary preferences, such as a broader array of organic, natural and gluten-free items.

“As we expand our footprint, we are able to support more communities throughout Florida and be the grocer our customers and communities can always count on,” Hucker added.

Southeastern Grocers said the eight new Winn-Dixie stores will provide more than 700 jobs to the communities they serve and the surrounding areas. The expansion follows the February opening of a new Winn-Dixie store in Jacksonville, which the company said came in response to concerns by the city and community about a potential food desert in the Brentwood community with the closing of a Publix store.

Overall, Jacksonville, Fla.-based Southeastern Grocers operates approximately 500 stores under the Winn-Dixie, Bi-Lo, Harveys Supermarkets and Fresco y Más chains. While the company has been phasing out the Bi-Lo banner and downsizing Harveys, it has continued to grow Winn-Dixie and Fresco y Más. Last week, Southeastern Grocers said it plans to open a new Fresco y Más store in Lehigh Acres, Fla., on Oct. 21. The location will be the chain’s 27th store in South and Central Florida.