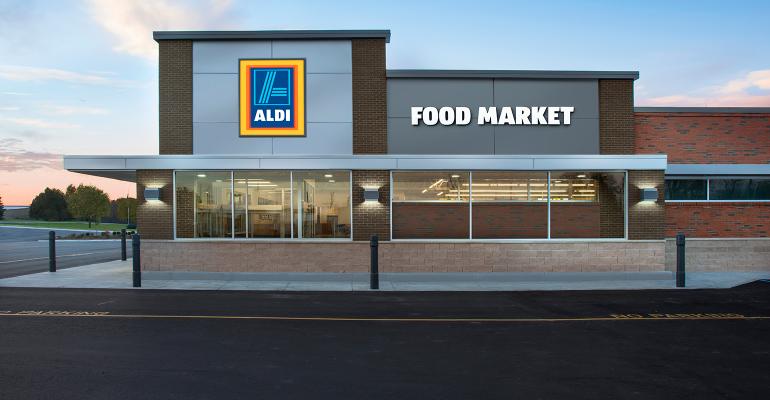 Aldi
Aldi is beefing up its Mid-Atlantic presence, including a major remodeling effort in North Carolina.
News>Store Design & Construction

Limited-assortment retailer Aldi is remodeling its stores in several Mid-Atlantic markets ahead of the pending debut of rival Lidl, according to local reports.

Lidl, owned by German retail giant Schwarz Group, is expected to open its first U.S. locations along the Eastern Seaboard this summer with stores in Virginia and North and South Carolina. Lidl has become more aggressive in securing sites since it began looking for long-term leases instead of relying solely on site acquisitions, one real estate expert told SN.

“In the last couple of months they have signed a number of long term leases and backed off [owning real estate],” the observer said. “They’ve shown some flexibility in their leasing, which should make it easier for them to find locations.”

Aldi, which has competed against Lidl in Germany and other European countries, said in February it had embarked upon a $1.6 billion remodeling project that will expand its perishables offering and otherwise modernize its fleet of 1,300-plus stores across the U.S.

That remodeling effort has begun in markets around the country, including the Charlotte and Raleigh-Durham-Chapel Hill areas of North Carolina, which are among the markets where Lidl is expected to open its first stores.

An Aldi spokesperson was not immediately available for comment.

In the Charlotte area, Aldi is planning to spend $48 million to remodel 31 stores, according to a report in The Charlotte Observer. Aldi actually opened its first remodeled store in the Charlotte market, in the town of Mooresville, last November, and has two additional remodels, in Belmont and Charlotte, slated to reopen this month. Lidl also has a store planned for Mooresville, the Observer reported, and has another planned for South End. Other reports have indicated Lidl is planning Charlotte-area stores in Rock Hill, Fort Mill and Gastonia — where Aldi shuttered a store last week for a renovation that is scheduled to last about six weeks, according to a report in the Gaston Gazette.

In the Raleigh-Durham market, known as The Triangle, Aldi will spend $13 million to remodel 12 stores in Raleigh and Durham by the end of next year, according to a report in the Raleigh-based News & Observer. The newspaper said one of the first stores in the region to undergo a remodel, a location in Fayetteville, N.C., will reopen Thursday with the new design.

The News & Observer previously reported that Lidl is planning to open stores in the Triangle-area towns of Wake Forest, Raleigh and Cary (two stores) and is considering a site in Clayton.

In the Greensboro/Winston-Salem area of North Carolina known as the Triad, local reports last month said Aldi planned to spend $14 million to remodel 10 stores by the end of this year. The Triad Business Journal also reported that Lidl had acquired eight locations in the Triad region.

In Virginia, local newspapers reported that Aldi has announced remodeling plans in the near term for stores in Fredericksburg, Manassas, Woodbridge and North Stafford. Aldi made its debut in the Lynchburg, Va., market last year, and has plans for about six locations in the market, local reports said.

“We see a lot of potential here in Lynchburg," Aldi District Manager Jessica Guffney was quoted as saying in the Lynchburg News & Advance. "We want to expand our company into this lower half of Virginia so our customers here can get the same savings and special shopping experience as our other customers in North and South Carolina are getting.”

Aldi has also begun remodeling efforts further north, including in eastern Pennsylvania, where Lidl is also expected to begin opening stores relatively quickly. One Aldi location in Lower Pottsgrove, Pa., will close for about four weeks beginning May 6, according to a report in The Sanatoga Post. Aldi is also planning to open in a portion of a shuttered Acme supermarket in nearby Limerick, Pa., which is also near a pending Lidl store, the newspaper said.

Aldi remodels are also underway in various other markets around the country, including in Minneapolis-Saint Paul, where local reports say Aldi will spend $34 million to remodel 28 stores by the end of 2019.

Unlike the markets in the East where Aldi has unveiled its remodeling plans, the Twin Cities remodels and others around the country appear to be on a longer timeline.

The Giant Company stays on growth path in Pennsylvania
Feb 19, 2021