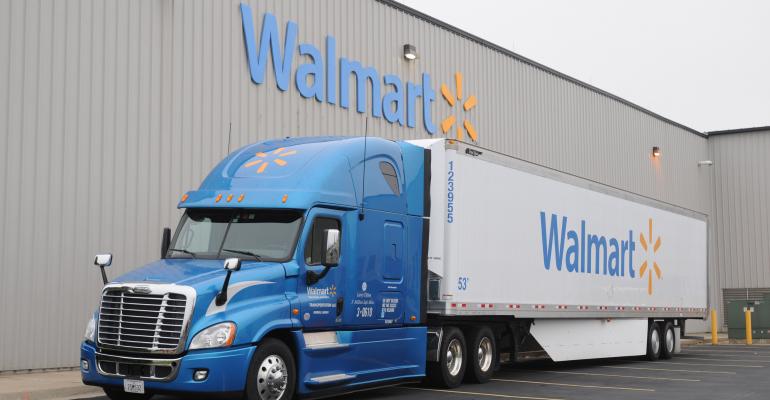 Walmart
Part of Walmart's zero emissions initiative includes electrifying and zeroing out emissions from all of its vehicles, including long-haul trucks, by 2040.
Issues & Trends>Sustainability

Walmart on Monday announced it is doubling down on addressing the growing climate crisis by targeting zero emissions across the company’s global operations by 2040.

Bentonville, Ark.-based Walmart and the Walmart Foundation are also committing to help protect, manage or restore at least 50 million acres of land and 1 million square miles of ocean by 2030 to help combat the cascading loss of nature threatening the planet.

“We want to play an important role in transforming the world’s supply chains to be regenerative,” said Doug McMillon, president and CEO, Walmart Inc. “We face a growing crisis of climate change and nature loss and we all need to take action with urgency.”

He added, “For 15 years, we have been partnering to do the work and continually raising our sustainability ambitions across climate action, nature, waste and people. The commitments we’re making today not only aim to decarbonize Walmart’s global operations, they also put us on the path to becoming a regenerative company — one that works to restore, renew and replenish in addition to preserving our planet, and encourages others to do the same.” 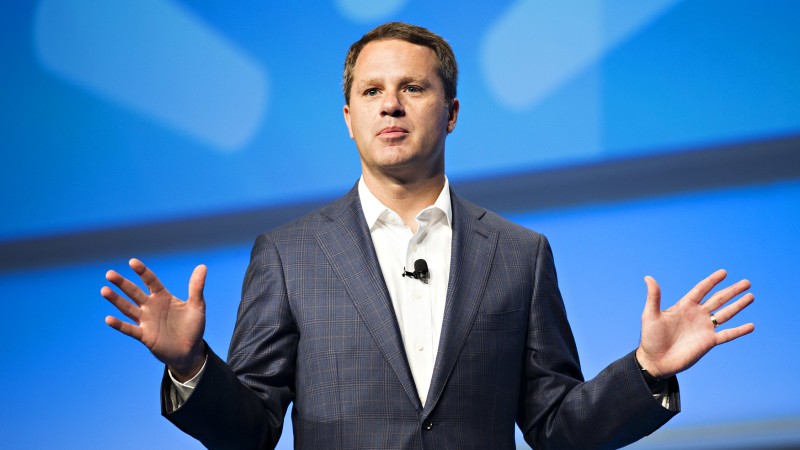 Doug McMillon, president and CEO of Walmart Inc., (shown here in 2018) will kick off this week's Climate Week NYC where he will share news about the retailer's zero emissions and efforts to help combat the cascading loss of nature threatening the planet.

Walmart, with over 11,500 stores worldwide, is building on its long-standing commitment to climate action by raising its ambition to zero emissions by 2040, without the use of carbon offsets, across its global operations by:

• Electrifying and zeroing out emissions from all of its vehicles, including long-haul trucks, by 2040; and

• Transitioning to low-impact refrigerants for cooling and electrified equipment for heating in its stores, clubs and data and distribution centers by 2040. 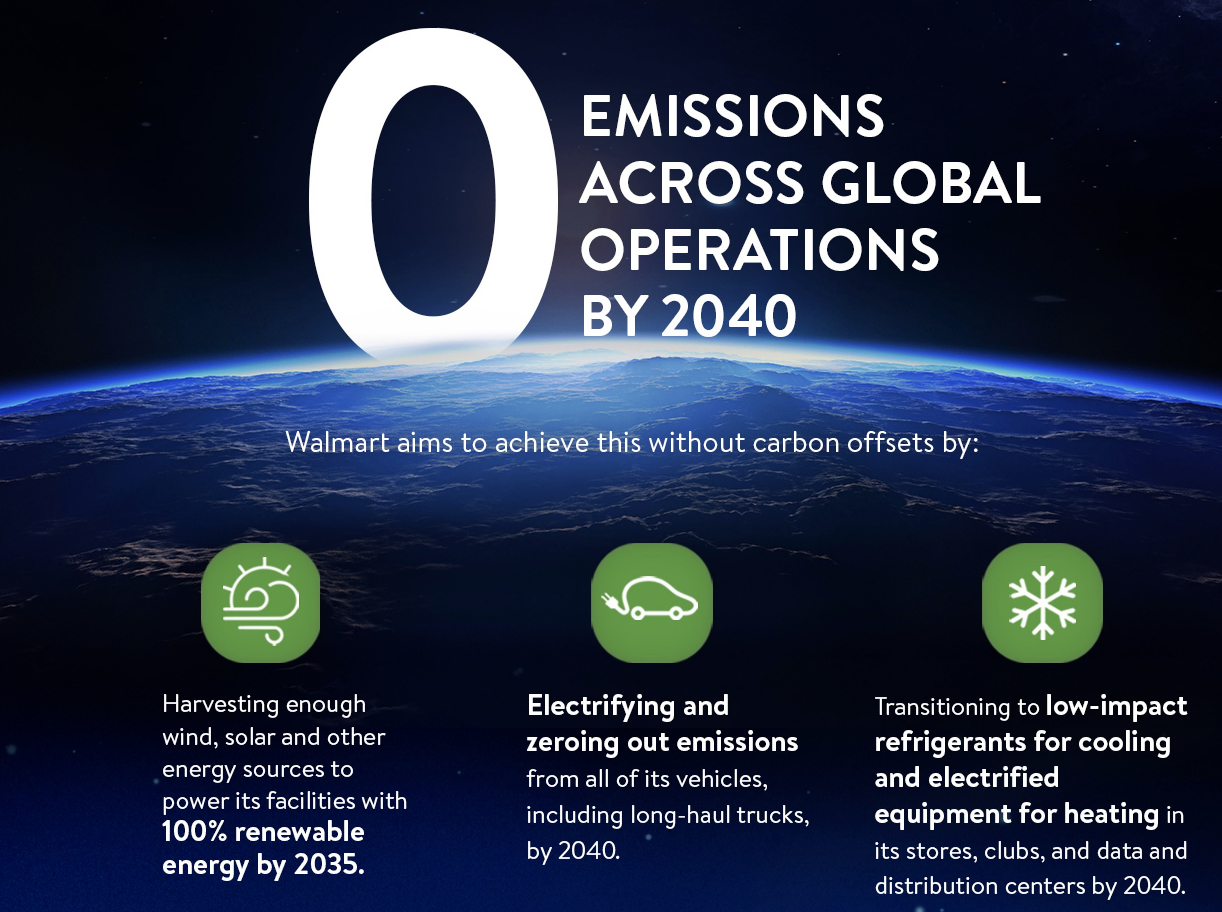 “We must all take urgent, sustained action to reverse nature loss and emissions before we reach a tipping point from which we will not recover,” said Kathleen McLaughlin, executive vice president and chief sustainability officer for Walmart Inc. and president of the Walmart Foundation. “People have pushed past the earth’s natural limits. Healthy societies, resilient economies and thriving businesses rely on nature. Our vision at Walmart is to help transform food and product supply chains to be regenerative, working in harmony with nature — to protect, restore and sustainably use our natural resources.”

Along with the Walmart Foundation, Walmart aims to protect, manage or restore some of the world’s most critical landscapes by:

• Continuing to support efforts to preserve at least one acre of natural habitat for every acre of land developed by the company in the U.S.;

• Driving the adoption of regenerative agriculture practices, sustainable fisheries management and forest protection and restoration — including an expansion of Walmart’s forests policy; and • Investing in and working with suppliers to source from placed-based efforts that help preserve natural ecosystems and improve livelihoods. 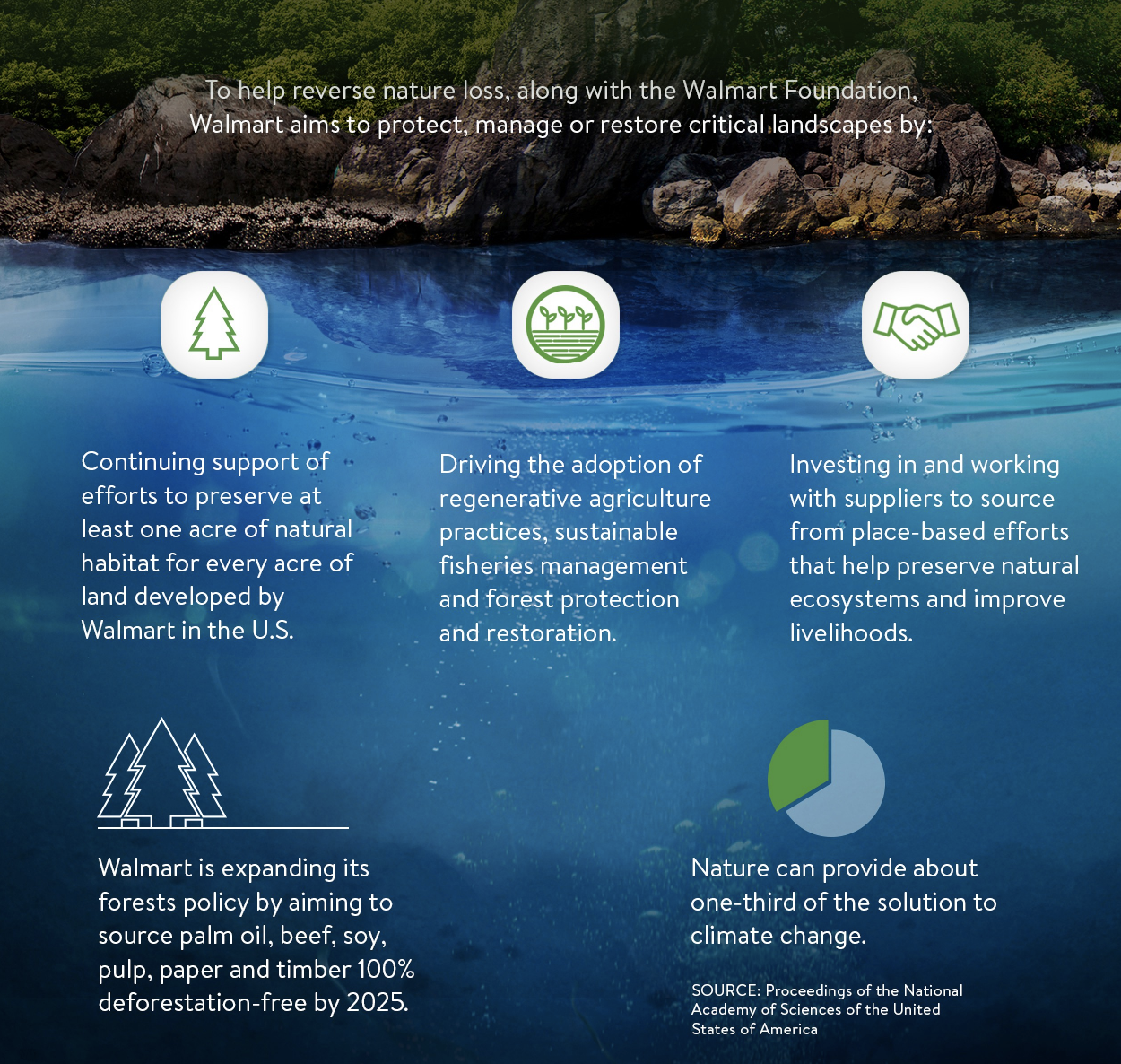 The news comes as this year’s Climate Week NYC kicks off, where Doug McMillon will share Walmart’s news during the opening ceremony. On Tuesday Walmart holds its annual Sustainability Milestone Summit, held during Climate Week’s Hub Live, where the company will engage Walmart associates, suppliers, NGOs and other stakeholders to advance sustainability in the retail and consumer goods sector.

To date, according to the company, Walmart powers around 29% of its operations with renewable energy and diverts approximately 80% of its waste from landfills and incineration globally. Because most of the company’s environmental impact comes from its supply chain, Walmart is also working with suppliers through its Project Gigaton initiative to avoid a gigaton of greenhouse gas emissions by 2030. More than 2,300 suppliers have signed on, and since the effort launched in 2017, suppliers report a total of 230 million metric tons of avoided emissions.