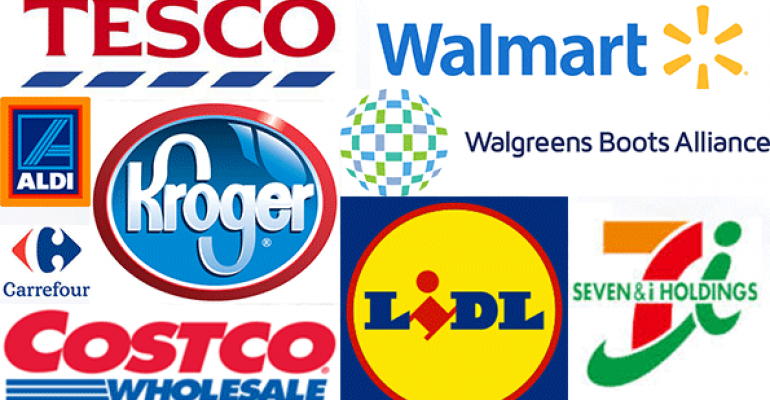 &ldquo;Walmart remains by far the leading player but will not rest on its laurels. In fact, there are a number of key strategic initiatives it is pursuing at home and abroad.&rdquo; &mdash;ROBERT GREGORY, Planet Retail &nbsp;

A shifting focus toward smaller retail formats and the strong U.S. dollar influenced Planet Retail’s list of the Top 25 Global Retailers, on which Walmart, Costco and Carrefour took the top three spots, respectively.

The ranking is based on 2015 sales in U.S. dollars, which Planet Retail has forecast for the year while taking into account historic performance, store opening projections (which are reflected in store counts provided) and an estimated comparable store growth rate.

With a projected $527.8 billion in sales, Wal-Mart Stores bests all other international retailers by a wide margin, according to Planet Retail.

“Walmart remains by far the leading player but will not rest on its laurels,” noted Robert Gregory, head of advisory for London-based Planet Retail. “In fact, there are a number of key strategic initiatives it is pursuing at home and abroad.”

These include restoring performance in some faltering international markets and focusing on e-commerce around the world.

“Walmart was initially slow to embrace e-commerce, but is making up ground fast with global e-commerce sales growing at more than 20% per annum,” Gregory said.

While the Bentonville, Ark.-based retailer has online operations in most countries in which it operates, its key markets for digital sales are the U.S., U.K., Brazil and China, according to Gregory. Walmart considers Asda in the U.K. and Yihaodian in China to be best-in-class for e-commerce, he said.

“While the growth of ancillary businesses and an expanded service offering should boost domestic sales, international club expansion will drive new member growth, which will propel a stronger bottom line,” he said. “The first store in France is scheduled for 2016, following on from entry into Spain in 2014.”

Gregory noted that despite increasing sales in their local currency, many European and Japanese retailers declined their ranking on the list due to currency exchange rates to the U.S. dollar.

The U.K.-based retailer is coming off a “nightmare year, rocked by leadership changes, the accountancy scandal, negative like-for-like sales and a record loss,” according to Gregory. “Further disposals are likely [such as Dunnhumby] and international markets such as South Korea, as it looks to rebuild its balance sheet and generate funds to invest in the U.K.”

While the outlook for Tesco and its 7,990 stores isn’t all doom and gloom, it still has a fair amount of challenges ahead.

“Tesco is currently on a journey and recent trading has actually improved and it is actually performing stronger than rivals such as Walmart’s Asda,” added Gregory. “However, it will be a long journey and with like-for-likes at its hypermarkets continuing to decline and with store openings being scaled back, Tesco is likely to fall further down the global ranking in the coming years.”

7-Eleven parent Seven & I, is the No. 6 retailer with $101.4 billion in sales across 38,009 outlets which include its retail banners and its nonfood offerings such as department stores.

It’s followed in the ranking by Lidl parent, Schwarz Group, with $99.7 billion in sales. Earlier this summer, Lidl confirmed plans to expand beyond Europe for the first time, to the U.S., but these stores are not expected to open in the near-term and therefore did not factor into Planet Retail’s projections. Schwarz Group has also announced market entries in Serbia (Kaufland, Lidl) and Lithuania (Lidl), according to Gregory.

With $96.2 billion in sales, U.S.-based Walgreens Boots Alliance is ranked No. 8. Its position was boosted by Walgreen’s acquisition of the remaining 55% of Alliance Boots that it did not own, to form the first global pharmacy-led, health and wellbeing enterprise and the largest purchaser of prescription drugs in the world.

Japanese retailer Aeon is No. 9 on the list with $92.1 billion in sales and 19,171 total outlets. And rounding out the top 10 is Aldi, which, according to Gregory, is among the retailers who’ve slipped down the ranking due to an unfavorable EUR-to-USD exchange rate.

Aldi’s expansion plans include new stores in a range of markets including some in Western and Southern Australia and West Coast and Southern California stores in the U.S. In addition to acquiring the Bottom Dollar chain from Delhaize, it hopes to more than double its stores in the U.K. by 2022, according to Gregory.

Minneapolis-based Target Corp., No. 11 on the list, “will accelerate small-box and urban expansion, via TargetExpress and to a lesser extent CityTarget,” said Gregory. “After having opened its first TargetExpress location last summer in its home market of Minneapolis, Target is set to open eight additional locations in 2015, more than half of its total planned store openings for the year.”

No. 14 on the list, CVS, with $70.5 billion in sales and 7,923 stores will continue to expand organically as well as benefit from the store-within-a-store concept that will result from its purchase of Target’s 1,660 in-store pharmacies and 80 in-store clinics, Gregory said.

“A clear trend amongst all players on the ranking is the shifting focus towards smaller formats,” he told SN. “Even the likes of Walmart are trying to decrease the proportion of sales from big-box stores as they look to embrace smaller formats, such as Walmart to Go and Walmart on Campus.

“In addition, investing in stores to make them a more integral part of the online shopping experience has become a priority with all leading players introducing click and collect facilities across their store networks. Clearly, this will be part of their attempts to reinvent the weak performing big-box stores, as well as measures such as improved service, greater use of in-store technology and trying to cater to the mobile shopper in the stores.”

Other notable retailers on the list include No. 19 Albertsons, with $56.8 billion in sales, whose ranking was boosted as a result of its merger with Safeway, and No. 22 Ahold, whose $46.7 billion sales projection does not include its forthcoming merger with Delhaize, according to Gregory.