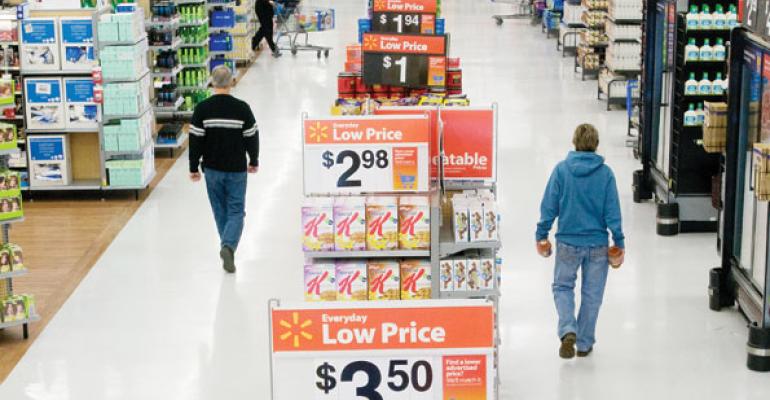 Following the Leader: From Walton to Duke

By the time Wal-Mart Stores’ 50th anniversary passes this year, another milestone of sorts will be reached: The company will have been run by successors of Sam Walton for as long as the founder ran it himself.

Walton founded and gave purpose to a discounter destined to one day become the world’s largest company, but David Glass took that vision to new heights and Lee Scott dealt with the positive and negative aftermath of such growth. Today, Mike Duke oversees a company with $419 billion in annual sales and more than 10,000 stores in 28 countries.

“I don’t think Sam would be surprised that the company is as big and as successful as it is today. I think that deep down, he believed it would be,” Maggie Gilliam, of the New York consultant Gilliam & Co., told SN in a recent interview. “He thought if it stuck to its principles there was no limit as to how far it can go. And still the only time it’s tripped up is when it has not adhered to its principles. And that hasn’t happened very much.” 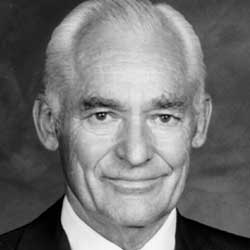 Walton (left), who in 2010 was named to SN’s Hall of Fame, was a visionary retailer whose influence continues to reverberate not only at Wal-Mart but just about anywhere that business gets done. He pioneered everyday low pricing behind innovations in efficiency that businesses in multiple industries would come to admire and emulate.

A son of a farmer who grew up in rural Oklahoma and Missouri, Walton learned retailing from stints as a JC Penney employee and as an owner of several Ben Franklin store franchises. Intrigued by the possibilities inherent in a discount retailer, he founded the first store under the Wal-Mart name in Rogers, Ark., in 1962.

From that unit grew a booming chain of stores serving small rural communities throughout the South. Walton was said to determine sites for expansion by looking at road patterns from the cockpit of his personal plane. Those sites became successful stores by being fierce advocates of the consumer, offering goods at a low price every day.

Although Walton displayed — and promoted — a simple, folksy image, his business instincts were sharp and his company was an innovator, sources said. His company was one of the first retailers in the nation to connect stores to headquarters in a network, and its EDLP promise — “We Sell for Less” — would eventually force competitors of all stripes to adapt or perish.

A corporate structure allowing his family to benefit from Wal-Mart while Sam Walton’s successors in the company could continue to grow it is an enduring and overlooked legacy, said Dave Marcotte, an analyst with Kantar Retail.

“As they were going through all this explosive growth, he realized the best thing he could do was get his family out of the business,” Marcotte said. “Nothing destroys a business faster than a family. Sam Walton’s ability to find a means of sharing the wealth equitably and avoiding public disputes doesn’t get enough credit.”

Marcotte also noted that Walton was keenly aware of the value in the story of Wal-Mart, noting that it lives on in company lore in part because its narrative matches its appetite for growth.

“Sam Walton was very conscious of creating corporate legends. The stories of him flying into people’s backyards and showing up at stores to help stock shelves. Those stories could be true for all I know, but it doesn’t really matter,” he said. “It created a corporate mythology, which is something that’s very difficult for a corporation to create.”

David Glass, like Sam Walton, grew up in rural Missouri. He joined Wal-Mart as an accountant in 1976 and eventually became the company’s chief financial officer. He took over for Walton as CEO in 1988.

“You don’t take over from an icon and have a smooth transition very easily,” noted Gilliam. “He was CEO for four years while Sam was still alive and that is pretty tough to do. But he did it beautifully and they remained very close. When Sam died, David stayed very close to the Walton family. He made sure they were plugged into everything that was happening.” 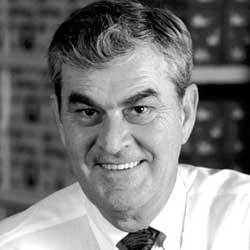 If Wal-Mart’s growth was dramatic under Walton it was explosive under Glass (right), who sources said was less reticent to take on debt and invest in growth than the founder, who passed away in 1992. His 12-year run as CEO saw the company expand internationally for the first time, and tear into the U.S. supermarket industry with introductions of the Wal-Mart Supercenter and Neighborhood Market formats.

“He was an absolute genius, the most important person in the management of Wal-Mart,” Gilliam contends. “Great leader, great mind, great ability to cut through fat and very good at making solid decisions. It’s hard to find anyone who disliked him — I don’t know anyone who does. That’s hard to do in a position like that. Yet he was fair and square and had a really droll sense of humor.”

Jose Tamez, an executive recruiter at Austin Michaels in Denver, said Glass’s pursuit of the grocery business was a critical moment. “Oftentimes you can look at a company’s lifecycle and see where there’s one point in time or another that determines whether they run into success or run into peril,” Tamez said. “That point was a critical time, no question about it.”

Glass, who resigned as CEO in 2000, went on to serve on Wal-Mart’s board until retiring in 2011. Over his 35 years with the organization, it had grown from 123 discount stores in the rural South to the world’s largest company.

“David joined Wal-Mart at a crucial time in the company’s history, bringing expertise in finance and distribution and pioneering the use of computer systems to link our stores and supply chain,” Rob Walton, chairman of the board of Wal-Mart, said in a statement upon Glass’s retirement from the board last year. “He is a great merchant who never lost the customer perspective. He encouraged frequent and open communication, and his talent for expressing his ideas was exceeded only by his talent for listening.”

A New Role for Wal-Mart's CEO

Glass’s successor as CEO, H. Lee Scott, rose through Wal-Mart’s ranks behind the scenes in the company’s vaunted logistics department but was destined to be remembered for being Wal-Mart’s most visible leader since Sam Walton.

Under Scott, Wal-Mart continued its phenomenal growth but found it was coming amid increased scrutiny on multiple fronts — much of it dating back to his predecessors in the company. Under Scott, Wal-Mart transformed the relentlessly taciturn posture under Glass to a gentler stance that endeavored to acknowledge the effects such a large organization could have in areas such as sustainability.

The effort had mixed effects. Some say the external focus took Wal-Mart’s edge away and allowed it to wander into strategies that were not consistent with its brand and core shoppers. Others applauded Scott for moving decisively to help to change an increasingly toxic debate around the company. 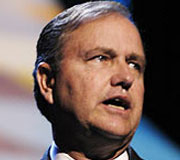 “I think Lee (left)was forced into a situation where he was spending a good portion of his time as a PR spokesman and as a liaison to government agencies and labor groups, and that was a totally new role for the CEO at Wal-Mart,” Gilliam said. “He claimed that the company was running well and by any indication it was running well, but clearly his energy was diverted to a considerable extent.”

“Lee Scott wanted a friendlier image for Wal-Mart,” added David S. Rogers, president of DSR Marketing. “Unfortunately, he lost some of the gusto.”

Wal-Mart under Scott crystallized around the retailer’s response to Hurricane Katrina, which affected millions of the chain’s customers and also, Scott maintained, demonstrated the chain’s capacity to do good.

“The thing I admire about Lee Scott was that he came to the realization he didn’t have to be the bad guy all the time,” Marcotte said. “He came to the realization that were a lot of good things about the company that people didn’t seem to get, and part of their failure as company was not addressing that. It had less to do with a marketing, getting-the-message-out type of things and more to do with a consistent set of behaviors that others would find admirable.”

A move to clean up stores, tighten product selections and change merchandising focus to draw wealthier shoppers was not well-received and as Scott resigned in 2009, Wal-Mart’s U.S. stores were seeing same-store sales in decline.

“They let the bean counters have too big a say a few years ago and they forgot that they were the agents of customer, which was a rule of Sam’s,” Gilliam said. “They were trying to sell the customers what they thought the customers should buy, not what they wanted to buy themselves. .... They thought maybe they should be more like Target or something. And you never, ever walk away from existing customers. That is bad.”

Duke, a veteran of Federated Department Stores and an engineer by trade, was hired by Scott in 1995 to oversee Wal-Mart’s logistics department. He later headed the retailer’s International division. When he succeeded Scott in 2009, he was the first Wal-Mart CEO not to have worked directly with Sam Walton.

Sources describe Duke (below) as bright, personable and effective but note he’s so far taken a low profile. The company in the meantime has made moves to regain the momentum it lost with the economic downturn and the shifts in U.S. strategies, with much of that dictated by Wal-Mart’s U.S. CEO, Bill Simon. 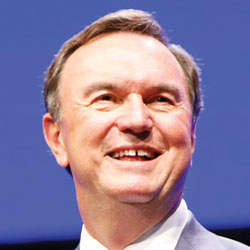 “I watched him for years on the International side, and in every country that Wal-Mart was operating in there’s a picture of him with the head of state. He was very engaged, a very hands-on guy,” said Marcotte. “On the corporate side I haven’t seen him as much, and I’m not sure if it’s the job that hides him or whether he’s intentionally taken a lower profile.”

Said Gilliam: “Mike is kind of laid back. He is very, very smart, and he is a good delegator.”

His background in logistics and International — areas in which Wal-Mart not coincidentally possesses advantages vs. competitors and its biggest new-store growth opportunities — prepared him to take over the role, Gilliam added. “He has a good background for understanding the company and where it should be going at this juncture,” she said. “I think he’s got a team that understands the old Wal-Mart.”