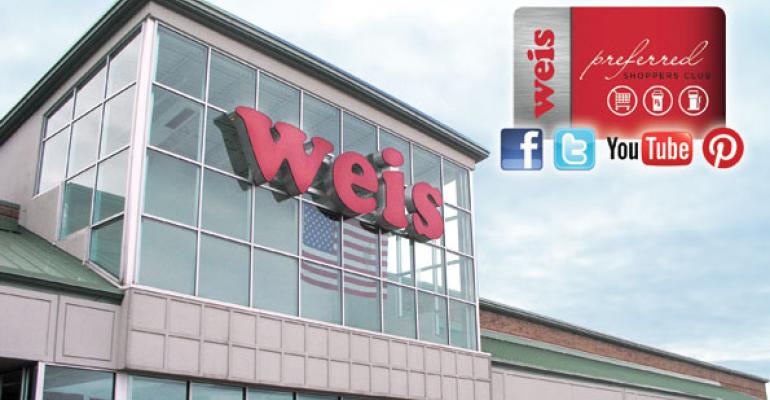 Weis Markets is in the midst of a social media explosion.

The Sunbury, Pa.-based retailer, which operates 163 stores in five states, has significantly built its Facebook following; launched Twitter and YouTube accounts; introduced a mobile app; posted recipes on Pinterest; and tested Foursquare and other up-and-coming sites.

And it’s far from done. It’s considering enhancing its popular Facebook-exclusive coupons so that they can be automatically loaded to loyalty cards rather than printed, according to Steve McFarland, online marketing coordinator.

It’s still researching various load-to-card options, and hopes to launch the capability on Facebook and its website in the first half of 2013. “We’re exploring it because it will be one less barrier for consumers to use coupons,” McFarland said. “The easier we make it to get coupons, the easier shoppers will be able to buy the items.”

Getting shoppers to use coupons is key, as Weis research has shown that coupon-using shoppers generate incremental sales and bigger basket sizes. That’s why it’s also considering adding digital manufacturer and store coupons to its mobile application.

The load-to-card plan comes at a time when the retailer has significantly enhanced its online marketing strategy. Weis is committed to strengthening its social media presence as a way to promote its programs and services and give recognition to its private-label program.

The retailer has dabbled in social media sites like Foursquare. It recently tested a Foursquare offer in York and Lewisburg, Pa., that awarded the Foursquare “mayor” a free cup of coffee and a half-price hoagie sandwich. Weis was pleased with the results and may run more Foursquare offers in the future.

The crux of Weis’ social media efforts, however, is Facebook. Weis currently has more than 50,000 Facebook fans, up from 1,800 just two years ago.

Creating a Facebook page was just the first step. The challenge was to get shoppers to visit it regularly.

Weis accomplished this by making it interactive. Since Facebook users appreciate exclusive savings and rewards, Weis lets all those who “like” its page print out several coupons. Every two weeks, Weis posts four to six new coupons, most of which are for private-label products.

“The coupons give our fans a reason to come back to our page,” said  McFarland.

Most of the coupons have face values of $1 or more. Current offers include $1 off a gallon of Weis-brand shelf-stable lemon, grape and other drinks; $2 off an 8-roll pack of Weis-brand paper towels; and $3 off any two packages of Top Care diapers.

“We want to make the offer enticing enough for them to tell their friends about it and come back again to look for more,” he said.

Another way Weis boosts digital coupon use is by tying coupons to recipes. It started using this strategy more often based on research it conducted with the University of  Pennsylvania’s Wharton business school. Conducted by MBA students working on a final project for an interactive marketing course, the study was conducted to determine the best ways to engage Gen Y consumers and drive loyalty. The  research showed that digital coupons and contests related to recipes drove loyalty, engagement and sales. According to the findings, the likelihood of the coupons being redeemed was increased, particularly if they were combined with a specific recipe for inspiration, according to McFarland.

“The recipes are a great way to give them inspiration for how to use our products,” he said.

Weis also leverages exclusive contests to engage social media users. It  recently ran an $850 Weber grill giveaway on Facebook. Again, only those who “liked” the Weis Facebook page could enter. What’s more, each player could get an extra entry for every friend who entered.

More than 4,000 people entered, including one  Facebook fan who recommended more than 100 friends, thereby getting 100 entries.

“The contest was a great way to get people to come back and visit the site,” he said.

Weis closely monitors all Facebook posts and responds in a timely manner. If McFarland sees a consumer complaint, he works with the customer service department to have the posts sent to the appropriate store manager.

“It’s a good way to keep our finger on the pulse of customer opinions,” he said. “It has strengthened the bond we have with our  customers.”

For instance, one shopper recently voiced anger that her favorite ground turkey and Kashi cereal were no longer available. The store manager responded the same day by stating that he would correct the situation. The customer was pleased, as were many others who read about the situation on Facebook.

“The conversation not only reaffirmed her loyalty to Weis, but the positive customer service outcome made her friends who commented on the post want to shop at Weis as well,” said McFarland.

WINSTON-SALEM, N.C. — Along with Groupon and Living Social, a new digital-coupon program is making a name for itself.

Aisle50 is similar to Groupon and Living Social in that members prepay for discounted products and services. The difference is that Aisle50 features only groceries.

Lowes Foods here and Shop ‘n Save, Pittsburgh, are among its retail clients.

Consumers can become a member by visiting aisle50.com and entering their store loyalty card number and credit card information, among other data.

Members receive an email notifying them of a deal on a grocery item at a reported savings of 30% to 60% off. Once a deal is purchased online, it is automatically loaded to the buyer’s supermarket loyalty card. When the participating item is purchased at the store, it rings up for free.

Under an offer currently available at Lowes, users who prepay a $9 charge at Aisle50 get a digital coupon for $15 worth of ice cream and Popsicles from manufacturers including Ben & Jerry’s, Breyers and Klondike.

The promotion launched in June and runs through August.

“Keep it cool this summer,” Lowes states on its website. “Right now you can purchase up to $15 worth of ice cream and popsicles for just $9. Visit Aisle50.com for details.”

ST. LOUIS — As Weis Markets contemplates load-to-card coupons, a growing number of other retailers are getting involved in the trend as a way to engage their most loyal shoppers.

Digital coupons can help retailers increase coupon redemption, as they average 10% redemption rates, and between 20% to 40% redemption when the offer is targeted, according to You Technology, San Francisco, which powers digital couponing programs for Kroger Co., Giant Eagle and other retailers.

While many retailers partner with third-party sites like Coupons.com and SmartSource, some are building coupon centers directly on their own websites.

Kroger and Safeway are two retailers doing just that. Once consumers register their loyalty cards, they can browse through dozens of savings in multiple categories.

The advantage of dedicated coupon centers is that they encourage consumers to interact with the retailer’s website and related media, said Ken Fenyo, chief executive officer of You Technology.

Indeed, retail websites are emerging as the go-to destination for digital coupon downloads. About 90% of coupon downloads from You Technology are from a retailer’s website, as opposed to a third-party site, according to Fenyo.