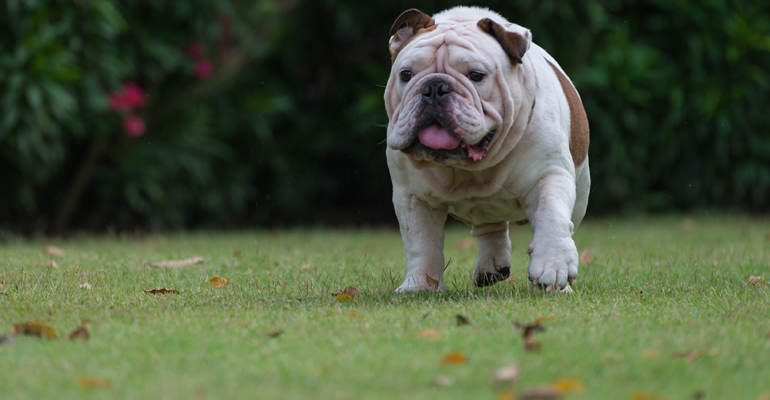 New research from the University of Liverpool and Mars Petcare's Waltham Centre for Pet Nutrition reveals that overweight dogs are more likely to have shorter lives than those at ideal bodyweights.

Results from the study, conducted retrospectively across two decades and published in the Journal of Veterinary Internal Medicine, found that the life span of dogs that were overweight was up to two-and-a-half years shorter compared to ideal-weight dogs.

New research from the University of Liverpool and Mars Petcare's Waltham Centre for Pet Nutrition reveals that overweight dogs are more likely to have shorter lives than those at ideal bodyweights.

Results from the study, conducted retrospectively across two decades and published in the Journal of Veterinary Internal Medicine, found that the life span of dogs that were overweight was up to two-and-a-half years shorter compared to ideal-weight dogs.

The researchers said concern is growing that many pet owners are unaware of the serious health implications of dogs carrying extra weight. Pet obesity is steadily on the rise, with the latest figures estimating that one in three dogs and cats in the U.S. is overweight.

Meanwhile, new data released this week from Nationwide, the nation's first and largest provider of pet health insurance, showed that pet obesity is on the rise for the eighth straight year.

According to Nationwide, nearly 20% of its members' pet insurance claims in 2017 were for conditions and diseases related to pet obesity, equaling a sum of more than $69 million in veterinary expenses. The boost in total obesity-related claims signifies a 24% increase over the last eight years, Nationwide said.

As with people, excessive body fat in pets increases the risk of preventable health issues and may shorten the life expectancy of dogs and cats. Nationwide said it recently sorted through its database of more than 700,000 insured pets to determine the top 10 dog and cat conditions related to or made worse by obesity: 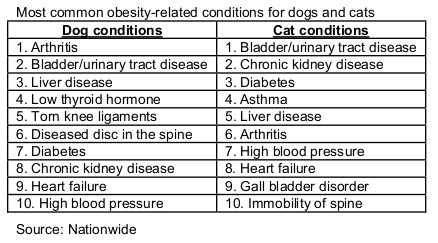 In 2017, Nationwide received more than 57,000 pet insurance claims for arthritis in dogs, the most common disease aggravated by excessive weight, which carried an average treatment fee of $323 per pet. With more than 5,800 pet insurance claims, bladder or urinary tract disease was the most common obesity-related condition in cats, which had an average claim amount of $495 per pet.

"Obesity can be detrimental to the livelihood of our pets," said Carol McConnell, vice president and chief veterinary officer for Nationwide. "Scheduling a routine wellness exam with a veterinarian is an effective way to get started on monitoring your pet's weight."

The University of Liverpool/Waltham study examined more than 50,000 dogs across 12 of the most popular dog breeds. The effect of being overweight was seen in all breeds, although the magnitude of the effect differed, ranging from between five months less for male German shepherds to two years and six months less for male Yorkshire terriers.

Although the study did not examine the reasons behind the extra pounds in dogs, feeding habits are thought to play a role in pet obesity. According to a recent "Better Cities For Pets" survey, more than half (54%) of cat and dog owners always or often give their pet food if they beg for it, and nearly a quarter (22%) of cat and dog owners sometimes overfeed their pet to keep them happy, the Liverpool announcement said.

Alex German, study co-author and professor of small animal medicine at the University of Liverpool. said, "Owners are often unaware that their dog is overweight, and many may not realize the impact that it can have on health. What they may not know is that, if their beloved pet is too heavy, they are more likely to suffer from other problems such as joint disease, breathing issues and certain types of cancer, as well as having a poorer quality of life. These health and well-being issues can significantly impact how long they live.

"For many owners, giving food, particularly tasty table scraps and tidbits, is the way we show affection for our pets. Being careful about what you feed your dog could go a long way to keeping them in good shape and enabling them to be around for many years to come," German added. "Worryingly, it is estimated only one in five pet owners always measures how much food they are giving their pet, with four in five (87%) always or often simply estimating the amount of food they think their pet needs at each serving."

The University of Liverpool/Waltham study was a retrospective, observational cohort study that leveraged demographic, geographic and clinical data from dogs that received care at Banfield Pet Hospitals between April 1994 and September 2015. Data were available from 50,787 dogs across 12 of the most popular family breeds: Dachshund, German shepherd, Golden retriever, Labrador retriever, American cocker spaniel, beagle, boxer, Chihuahua, pit bull terrier, Pomeranian, shih tzu and Yorkshire terrier. For each breed, the life span was compared for dogs whose owners reported them to be overweight and those in optimal body condition.

As the largest general veterinary practice in the world, Banfield has more than 1,000 hospitals across the U.S. and Puerto Rico comprised of veterinary teams who provide care for more than 3 million pets annually. The data extracted for this study included demographic (breed, sex, neuter status and date of birth) and geographic (latitude and longitude of the owner's postal code) variables, plus data collected during in-clinic visits (date of visit, bodyweight and, if available, body condition) and date of death. Pedigree status and date of birth are both owner-reported parameters and were not verified by veterinary staff.