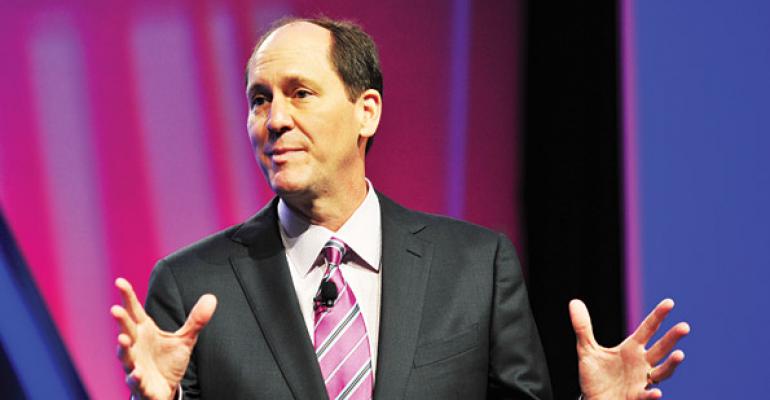 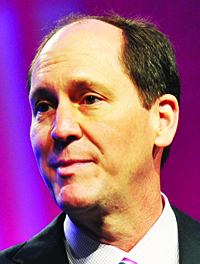 John Compton at the FMI event.

ORLANDO, Fla. — A top CPG executive delivered a bold message here to the food industry about the need to dramatically shift practices to jump-start growth.

The presentation, made at the FMI Midwinter Executive Conference here, won praise for its courage and overall direction, while raising questions about how such a plan could be accomplished.

John Compton, chief executive officer, PepsiCo Americas Foods and Global Snacks Group, said the industry needs to change its approaches in everything from data practices to supply chain in order to fuel growth at a time of challenges related to the economy and consumer behavior.

He said the industry isn’t growing if one strips out price increases resulting from inflation. At the same time, he added, the industry is moving much slower than consumers in embracing digital advances, particularly when it comes to using new devices to make purchase decisions.

The fast growth in online purchases of categories such as diapers should be taken as warning signs about coming changes in other categories, he stressed.

“The convergence between online and in-store is happening faster than many are willing to accept,” he said.

Compton urged a renewed focus on growth and centered his solutions on three drivers: insights, innovation and in-store. “Of the $10 billion we spend on insights across multiple industries in North America, half is spent on data collection and interpretation,” he said, adding that the data is often two or three weeks old and often at a macro level.

“What if we can repurpose money spent on data for shopper needs,” he said. “Let’s solve shopper needs store by store. Let’s focus insights spending on building demand.”

“Yet, 50% of you don’t charge slotting fees,” he told retailers. “Let’s have the courage to launch blockbuster new items that drive growth and consumer loyalty. Let’s repurpose slotting fees against understanding shoppers and building loyalty.”

On the in-store topic, Compton said the industry’s supply chain is too slow.

“There’s still 60-plus days of system inventory in the industry,” he said. “Why don’t we all commit to systemwide inventory reduction.”

He said there’s a $30 million savings for each day of inventory removed.

“We can use the savings to make the in-store experience better,” upgrading stores to create loyalty, he said.

Compton added that his message is validated by a new white paper from Accenture that pinpoints some $100 billion in “trapped value” in the industry that could be unlocked by retailers and suppliers.

He urged trading partners and the industry’s Trading Partner Alliance (TPA) to embrace his message and take action.

Scott Schnuck, co-chairman of the TPA and chairman and CEO of Schnuck Markets, said the TPA is in a good position to address some of these topics because they fall under its areas of focus and there’s a “very strong collaborative spirit.”

Donald Knauss, chairman and CEO, The Clorox Co., who is the other co-chair of the TPA, said that industry body could help organize the work and “build a roadmap” for these initiatives, while recognizing that many retailers have other models. “We can say, ‘Here are some ways to think about this and to share best practices.’”

He sensed a lot of “intellectual alignment” around the idea of focusing on the three buckets — insights, innovation and in-store.

“How do we challenge the money we’re spending in each bucket to help drive growth?” he said.

One of the first executives to publicly support Compton’s remarks was Danny Wegman, chief executive officer of Wegmans Food Markets, who relayed his opinion during another Midwinter session, according to a transcript provided to SN.

“Let me be the first one to publicly sign up for your program,” Wegman said. “I think it’s terrific.  I think it’s great for the industry. Thank you so much for bringing it up, and we want to support you 100%.  I’m sure you’ll find a lot of other folks out in the audience who’ll want to do the same thing.”

Michael Minasi, Safeway’s president of marketing, said during remarks in an educational session that Compton’s focus on building growth is on target for the industry.

“John Compton talked about reframing the relationship between manufacturers and retailers,” he said. “I’m not certain that his proposed approach is exactly right for us, but reframing that relationship around growing business and not just collecting allowances is a real opportunity for Safeway and for the conventional grocery space generally speaking.”

“Collaboration is important to manufacturers and retailers,” he said. “John had a clear point: ‘If you look at capital use and return on investment, we still leave a lot on the table as an industry.’  So there are many opportunities when you collaborate in a better way as industry, such as getting inefficiencies out of the supply chain.”

Kevin Davis, president and CEO, Bristol Farms, said Compton’s message was an important call to action. It was “a stimulus for us to wake up and take a look around the corner and make sure we’re pushing on the correct fronts,” he said. “It was very beneficial and worthwhile, a message to all of us, independents and chains, to keep innovating and moving to stay ahead.”

“This is very much the next big battleground: To understand things like share of wallet and how we’re doing around specific occasions,” he explained. “So it’s not that data is unimportant, it’s just that the nature of the data changes, and more of the value is what you do with it.”