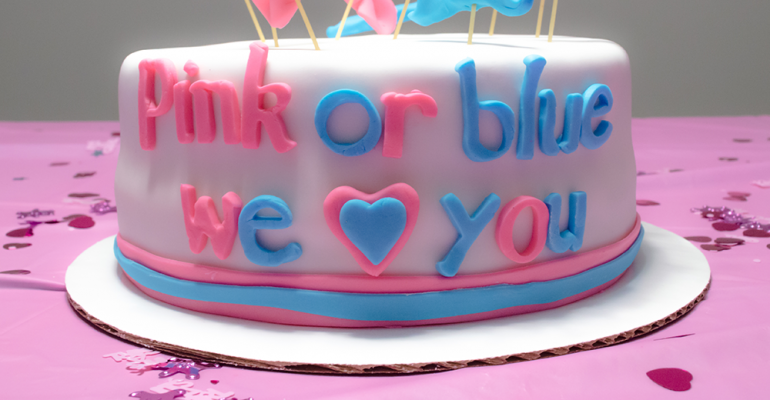 Bakeries get in on the big reveal

When a pregnant woman approached a Dillons supermarket bakery department holding a sealed envelope, pastry chef Randy Stratton knew exactly what to do. He carefully documented the note — and protected the secret it revealed inside.

It’s all part of Stratton’s protocol when taking orders for so-called “gender-reveal” cakes and cupcakes. For most gender-reveal orders, expectant parents do not know the sex of their baby, so they have their doctor’s office write down the gender and seal it in an envelope. They then bring the envelope to a cake decorator, who will fill the cake with pink or blue frosting. Parents find out the sex of their baby once they cut into the cake, typically part of a celebratory gender-reveal party with family and friends.

“Many people will come straight from their doctor’s appointment to us,” said Stratton, who works at a Dillons in Wichita, Kan. 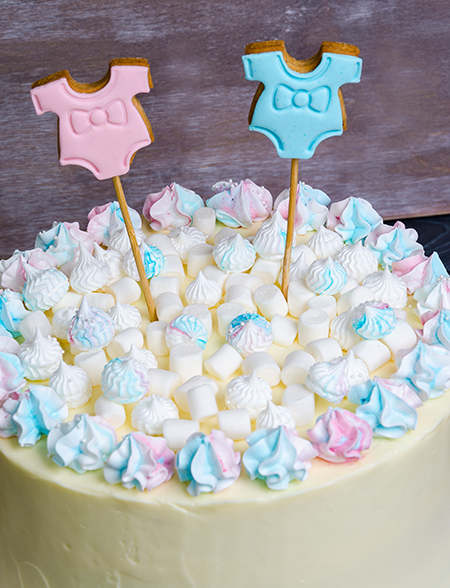 To make sure the gender isn’t accidentally revealed when the expectant parents pick up the cake, the sex is never written on the order form, Stratton said. Rather, each order form is given a special number so that the decorator knows the gender.

“It’s very exciting to know that you’re the first person who knows the gender,” he said. “It’s an honor that people trust you with such important information.”

Spring is an especially popular season for gender-reveal cakes. Stratton’s bakery typically handles 20 to 30 gender-reveal cakes each month during this time of year. Parents can choose different types of decorations for the top of the cake, such as pink and blue baby rattles and shoes. Others prefer gender-neutral colors and decorations like giraffes or puppies.

Customers can choose to reveal the sex with pink or blue icing inside the cake, as well as pink or blue candy that spills out of the cake when sliced. For candy-filled cakes, Stratton will cut out a portion of the cake and fill it with candy or sprinkles.

“Having the colored icing plus the candy inside is much more impactful,” said Stratton, who received a People’s Choice award at International Dairy Deli Bakery’s 2018 Cake Decorating Challenge.

After customers pick up the cake and enjoy it, many return to the bakery with thank-you cards and gifts — and additional bakery orders.

“The biggest benefit is that I often lock them in as clients,” Stratton said. “They become repeat customers.”

One Publix store in Lakeland, Fla., makes at least one gender-reveal cake a week, said Anna Sharma, a 16-year store cake decorator. An 8-inch gender-reveal cake feeds about eight to 10 people. Prices range from about $20 for pink/blue buttercream frosting inside to about $28 for blue/pink frosting, plus pink or blue candy inside.

Like Stratton, Sharma takes special precautions when handling gender-reveal orders. Once bakery associates read the doctor’s note, they quickly put it away. They will then code the ticket in a way that the color of the frosting inside isn’t revealed to the customer.

“We have to be very careful because we never want to ruin the surprise,” she said. “It’s not an everyday cake.”

The gender-reveal trend is so popular that major retailers like Party City and Target have launched lines of complementary party goods, including plates, napkins and decorations. Likewise, social media app Pinterest is filled with ideas for gender-reveal parties and gifts. And there are a growing number of websites dedicated to the topic.

A major part of the ritual is documenting the “reveal” on social media. Instagram stories are filled with parents popping piñatas filled with blue or pink candies and opening sealed boxes releasing pink or blue balloons.

“The increasing popularity of gender-reveal parties correlates with broader trends of sharing and publicizing many life events across social media,” said Carly Gieseler, an assistant professor of speech and communication at York College/City University of New York. Gieseler wrote an article on the subject in an academic journal.

The trend has become so extreme that some parents seek to one-up each other with gender-reveal stunts like skydiving out of a plane and revealing the gender via smoke bomb on the way down to the ground. A few couples have even revealed the gender with blue or pink smoke that erupts during a Tannerite explosion.

Still, cakes and cupcakes are the big winners in terms of sales because they are the prominent feature of most reveals, Gieseler said.

“These bakery items are also some of the most popular and affordable visual elements in the trend and remain staples, even as many reveal parties continue building bigger spectacles like skydives or Tannerite explosions,” Gieseler told SN

ShopRite of Greater Morristown in Cedar Knolls, N.J., bakes several gender-reveal cakes each month. Customers can choose to reveal the sex with colored frosting or even pink- or blue-colored cake inside. A three-layer, 8-inch cake with two layers of filling costs between $19 to $25, depending on which option is chosen. A two-day notice is requested.

For most orders, the reveal is a surprise to the parents themselves. In some cases, however, the parents know the sex, but order a gender-reveal cake to surprise their loved ones with the news as part of a party with food and games, said Elizabeth Olsen, a cake decorator at the ShopRite store.

While gender reveals have added a certain level of stress for in-store bakeries in terms of keeping the sex a surprise, they’ve made a fun job even more rewarding, bakery associates told SN.

“It’s exciting that we know before they do,” said Snezana Boskovic, a cake decorator at Lamb’s Garden Home Market Place in Portland, Ore.