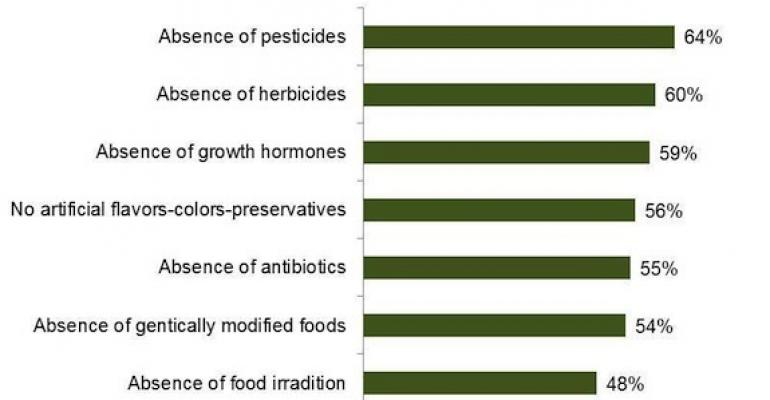 The organic movement was quick to jump on the Stanford researchers who were unfortunate enough to conclude that organic foods are no more nutritious than their conventionally-prepared counterparts. Not a day has gone by since the Stanford study was released on Sept. 4 that there hasn’t seen a rebuttal, rejection or ridicule of the findings.

The overall theme of the objections has been that the study missed the point: Organic is not just about nutrition, but the way we get our food and the way it is grown and processed. Bottom line: The scope of the research was way to narrow to encompass everything that organic represents.

The emails continue to land in my inbox. Just today the Organic Farming Research Foundation released a study entitled “Organic Farming for Health and Prosperity” that “extols the multiple societal benefits of organic farming in North America.”

No mention of nutrition there.

Then, there’s the fact sheet from Duane Law, a naturopath and acupuncture advocate, noted that consumers pay a premium for organic food “precisely because they don’t trust government safety standards and want to avoid pesticide residues” as much as they can.

“By limiting their definition of the term “nutritious” to the nutrient content of the food and ignoring more salient concerns regarding the adequacy of pesticide regulation, specifically the adverse health impacts of ‘safe’ levels of neurotoxin pesticides,” Law writes, “the researchers have engaged in a dangerous and deceptive semantic game, ignoring the very reason consumers pay a premium for organic food in the first place.” 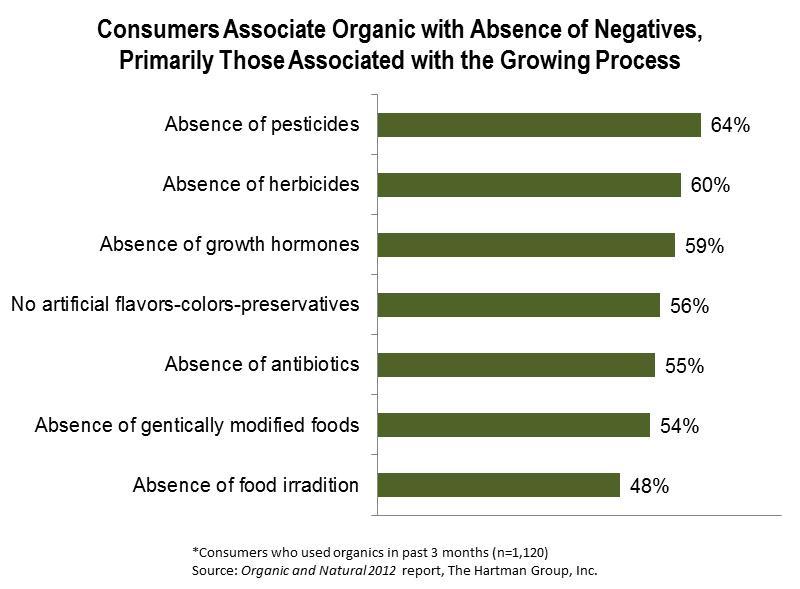 So, all the professionals and experts and advocates have weighed in. What about consumers? What do shoppers think of the study’s findings? Just how aware of it were they, anyway?

Regardless of the number, consumers aren’t likely to change their thinking about organic. The Hartman Group took the pulse of shoppers and found that those purchasing organic foods do so for reasons other than straight nutrition.

“Shoppers, historically, adopt and continue their purchase and consumption of organic foods and beverages for reasons that extend beyond nutritional values,” said Laurie Demeritt, The Hartman Group’s president and COO. “Organic gained prominence for the many other quality and health notions it represents, like authentic, pure and, most importantly, the halo of being free from negative ingredients.”

The data (shown above) is from the firm's soon-to-be-released report, Organic and Natural 2012.

The fact that consumers are better educated about organics, and are now demanding more transparency and accountability from manufacturers, serves as additional evidence that they are well beyond thinking that organic is more nutritious just because it’s organic. The top three reasons shoppers told Hartman they buy organic are the absence of pesticides, herbicide and growth hormones.

Indeed, it’s not what organic has (i.e., greater nutrition) that compels consumers to purchase organic food, but what it doesn’t have: Chemicals, genetically-modified organisms, irradiation, antibiotics… the list goes on.

This is the message that retailers need to remember when marketing organic through their wellness platforms. It’s a tough order to take, since the nature of retailing is to promote More, Better, Extra, Added, and the like. Selling organic requires them to talk about terms that aren’t part of their everyday lexicon: Less, Fewer and Without

But in the organic world, those descriptions are just as powerful a purchase motivator as those promoting the idea that more is better.