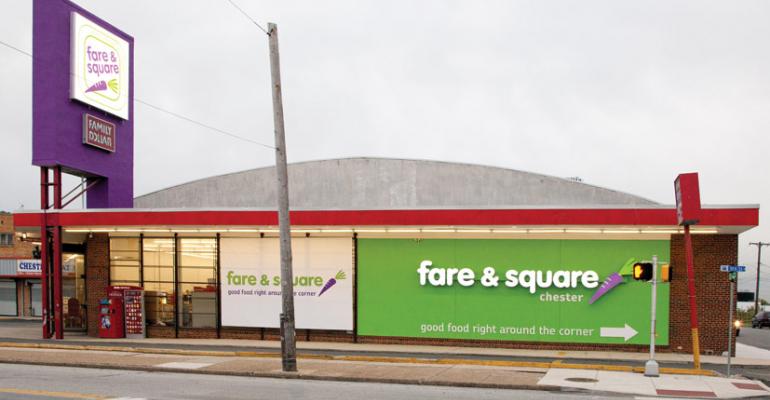 When Fare & Square opened last September, the city of Chester, Pa., not only welcomed its first supermarket in 12 years, but also the IGA brand.

IGA sugar is the top-selling item in the 14,000-square-foot store. And IGA is outpacing national brand sales in several other key categories.

Store brand sales are so strong that the three-month-old store is being reset to accommodate a larger selection.

What makes Fare & Square unique is that it’s said to be the nation’s first nonprofit supermarket. It operates just like a traditional grocery store, but because it is a registered 501(c)(3), it does not need to make a profit to stay in business. All revenue is used for operational and employee costs, according to management.

If it does make a profit, the money is put back into the store by lowering prices or providing various programs that benefit the community, management said.

Fare & Square opened on Sept. 28 in a city the USDA designated as one of about 6,500 national “food desert tracts,” areas with limited access to fresh, healthy and affordable food.

Chester was one of 35 food deserts in the Delaware Valley, a Philadelphia metropolitan area located between the cities of Philadelphia and Wilmington, Del.

The last full-service Chester supermarket closed in 2001, forcing residents to travel from four to six miles to reach a food retailer with fresh fruits and vegetables and other perimeter departments.

The success of the IGA label comes after Fare & Square organizers initially were unsure how it would be received. When management surveyed the community prior to opening, it found that residents didn’t want a private label dominated store like Aldi. They wanted a traditional store with mainstream brands.

Still, to provide shoppers with a lower-priced alternative to national brands, private labels were assigned to most food categories. IGA was chosen because it’s the brand Bozzuto’s, the store’s wholesaler, carries.

A total of 750 IGA items are sold in most major food categories. Along with sugar, other top-selling items include apple juice, paper towels and spring water.

While shoppers were initially leery of the brand, once they learned about it and tried it, they became loyal, said Paul Messina, the store’s managing director.

“We’re surprised that IGA was received as well as it was, as quickly as it was,” Messina said.

Among the categories in which the IGA label outsells the national brand:

• Toasted oats cereal (when Cheerios are not on special)

Prior to the opening of Fare & Square, the nearest supermarkets were Giant and ShopRite, so the IGA brand was unknown.

“The IGA brand was foreign to them,” Messina noted.

Messina attributes the fast success of the brand to a comprehensive education campaign. Employees explained that it is the store’s “house” brand, and is as good as or better than national brands. The brand was sampled and heavily advertised in circulars.

Fare & Square offers a money-back guarantee to anyone who purchases an IGA product and isn’t satisfied. To date, no one has asked for a refund, said Messina.

Many shoppers rely on federal food assistance. The brand sells especially well in the second half of the month, when food stamp benefits are running low.

“They buy private label to stretch out their benefits,” he said.

Fare & Square merchandises IGA products next to their national brand counterparts. It leverages  Bozzuto’s “Compare & Save” signage to highlight the price difference.

Take canned green beans. The IGA brand costs 79 cents, compared with Del Monte, which is about $1.08.

“The Compare & Save program helps give the store brands a nice boost in sales, he said.

“We’re taking products that customers purchase on a regular basis and providing them at an even deeper discount,” Messina said.

IGA’s strong performance has prompted management to expand the label into additional categories.

While IGA has a strong presence in food, it was poorly represented in several nonfood categories, including pet food, cleaners and detergents.

That is about to change. Fare & Square plans to add the IGA Hy-Top brand of dog and cat food to the mix. IGA will also play a stronger role in the household cleaner category.

“I believe that they will do quite well, considering how readily our consumers have accepted IGA in food,” said Messina.

One of the reasons Fare & Square had a limited nonfood assortment is because the store is located in a strip mall that houses a dollar store. Management decided it would be hard to compete with a dollar store’s nonfood price points.

Due to the success of the IGA label, the time is right to enter the nonfood business, said Messina. Take dish detergent. Even if the dollar store offers Palmolive for $1, the IGA brand can come in at 79 cents, according to Messina.

“We can now be competitive with dollar stores,” he said.

Philabundance hopes to expand the Fare & Square model to other communities in the Delaware Valley.

• Fare & Square, Chester, Pa., is the first nonprofit grocery store of its kind.

• The last grocery store within the city limits of Chester closed in 2001.

Fare & Square shoppers are encouraged to sign up for the free “Carrot Club” membership. (A purple carrot is featured in the Fare & Square logo.)

Members are eligible to earn rewards, including store credit given through in-store promotions, program incentives and special values.

Carrot Club members who earn 200% of the poverty line or less can receive Carrot Cash, a 7% credit toward future purchases.