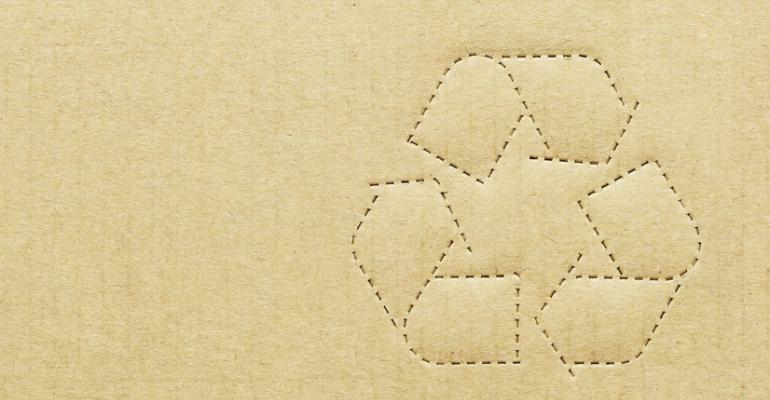 Store Brands 2014: Packaging with a purpose

Fiber mushroom trays and cardboard laundry detergent bottles are among the vessels Safeway is using to reduce the environmental footprint of its store brand packaging.

While most mushroom trays are sold in foam containers, which are not biodegradable, the supplier of mushrooms sold under the Safeway Farms and O Organics brands developed a new recyclable and compostable fiber mushroom tray.

By switching to the new trays, Safeway says it avoided sending more than 370,000 pounds of expanded polystyrene (EPS) to landfills in 2011.

The retailer is making a big dent in landfill waste in another way. It recently rolled out Bright Green store brand laundry detergent in recyclable and compostable bottles made from cardboard and old newspaper.

The bottle is comprised of a moisture resistant outer shell made from 100% recycled materials. It can be recycled up to seven times or composted.

Inside the shell is a pouch that uses up to 70% less plastic than comparable plastic jugs. It can be recycled with plastic shopping bags at retailer drop-off bins.

The launch of the bottle comes at a time when the packaging industry is in a transformational mode, said Julie Corbett, founder and CEO of Ecologic Brands, the Oakland, Calif., company that developed and manufactures the Safeway detergent bottle.

“Consumers are becoming highly sensitized to the kind of materials used in packaging,” said Corbett.

The bottles are made in a closed loop system in which old cardboard boxes are taken from Safeway stores to Ecologic’s Manteca, Calif., production facility, where they are recycled into the Bright Green bottle shell.

The process is a huge step forward in addressing corrugated waste in a meaningful way, said Corbett.

The Manteca site was strategically selected given its proximity to Safeway and other clients who provide corrugated material.

Other retailers are taking leadership roles in green store brand packaging as well. They include:

• Target, for its Market Pantry Purified Drinking Water, packaged in lightweight bottles made with 30% less plastic.

Introduced last year, the trays are made from 80% recycled #1 plastic, meaning they can be recycled just like a soda bottle. They will eventually replace more than 11 tons of polypropylene #5 trays on which the company’s fresh meat products were previously wrapped. 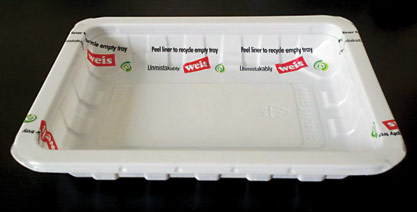 The trays are one part of the retailer’s sustainability initiative, which also includes a recent expansion of its composting program and the opening of its first LEED-certified store.

“This is good business practice,” said John Steiner, Weis’ meat plant manager. “We’re always looking for products that are good to the environment.”

The trays contain an outer liner that can be peeled off and thrown away. The tray can then be placed in a recycling bin.

To educate consumers about the tray’s recyclability, the phrase “Peel Liner to Recycle Empty Tray” is printed on the inside of the package. How-to videos were played on the retailer’s in-store television network when the trays first launched.

By using the trays, Weis has set the bar on what it means for a company to be committed to sustainability, said Clearly Clean sales manager Bob Kratochwill.

“Weis has made it known that it wants to be part of the recycling community,” he said.

The meat trays resonate with today’s eco-aware consumer, especially younger ones, according to Kratochwill.

“The younger population is particularly interested in environmentally friendly packages,” he noted.

In addition to Weis, Ahold’s Giant-Landover division just started using the trays for beef patties, ground pork and meatballs, according to Kratochwill.

Along with the meat trays, Weis is using other types of green packaging for its store brands.

The retailer’s Weis Quality brand 24-pack 20-ounce bottled water comes in bottles made from 100% recycled PET. The retailer said it is the first supermarket company in the country to offer its water in the environmentally friendly bottle.

Manufactured with recycled resin from baled post-consumer plastic purchased from municipal recycling plants, the bottles contain 25% less plastic than before. The water is produced and bottled by Ice River Springs, a North American bottled-water company with eight manufacturing plants throughout the United States and Canada.

Meanwhile, retailers are reducing their carbon footprint in other ways.

One of the reasons it joined the group is to get insights into programs to increase the recycling of plastic bags and wraps, according to Jason Wadsworth, Wegmans’ sustainability coordinator.

“As a retailer, we have a direct connection to the final user of many plastic bags and films,” said Wadsworth. “Raising recycling awareness of consumers may be very helpful to the cause.”

Wegmans hopes that by helping its customers and employees become aware of how they can participate, the overall recycle rate of plastic bags and similar film types will increase, said Wadsworth.

Wegmans is the first retailer to join the FFRG. Its participation provides a critical interface between consumers who want to recycle and the recycling process, said FFRG director Shari Jackson.

“Working directly with retailers like Wegmans ensures that we can provide the best tools and resources to meet their needs and simplify the recycling process for everyone,” said Jackson.

Retailers that employ similar efforts not only help the environment, but improve their brand positioning among consumers, particularly eco-aware moms.

Nearly three-quarters (73%) of moms are considered eco-aware, meaning they think about how the things they do, buy and eat impact themselves, their families and the world in which they live, according to a study by EcoFocus Worldwide, a St. Petersburg, Fla., research company.

This is an important demographic group, as it’s 62 million women strong and holds $1.75 trillion in buying power, according to the study.

Among other traits of the eco-aware mom, according to the study:

• They have children 18 years and younger, and their Earth-minded values are becoming part of how they define themselves as good parents.

• 73% want their children “to remember me as teaching them to be environmentally responsible.”

• 59% of eco-aware moms say they have changed what they buy based on the type or amount of packaging.

Retailers who use eco-friendly packaging choices can better position their products and store in a positive light among eco-aware moms, the study states.

Women who identify as eco-aware see a strong correlation between personal and environmental health, and do their best to avoid potentially harmful chemicals from product ingredients as well as packaging. They view beverage packaging options such as cartons and glass as more Earth-friendly than other materials.

“Their desire is to lead an eco-friendly lifestyle, and that plays into packaging decisions,” Reynolds said.

Moms are interested in the recyclability of the package and also if the package is made with renewable materials. Store brand packaging that meets these specifications has a better value proposition, added Reynolds.

“The type of packaging used impacts consumer perception of private labels,” she said.

Consumers seek out Earth-friendly messaging on product packaging, such as a “recyclable” logo or the brand’s sustainability commitment.

“Consumers like to see these cues on packages,” Reynolds said. “It helps them in their purchase decision.”

Moms are an important market for eco-friendly packaging companies because they are largely the ones who handle the product package, from taking the product off the shelf, to placing it in the pantry or refrigerator to using it to serve their families.

“We are pleasantly surprised with how diligent eco-aware moms are when it comes to packaging,” said Reynolds.

Eco-friendly retailers and vendors also have had success with the Millennial demographic. Cartons from Tetra Pak, Vernon Hills, Ill., are made of 70% paper, a renewable resource, from selectively harvested, re-grown trees and use one-third fewer materials than traditional packaging. This makes them a natural fit for the Millennials’ frugal lifestyle, said Suley Muratoglu, VP of marketing and product development.

Tetra Pak has responded to consumers’ changing demands not only in terms of its main packaging, but also in features likes caps and closures. It aspires to develop packaging material based on 100% renewable materials, according to Muratoglu.

Tetra Pak is using plastic caps made of high-density polyethylene (HDPE) derived entirely from a renewable feedstock. Through a partnership with Braskem, Brazil’s largest petrochemical company, Tetra Pak’s “green caps” are derived from sugar cane. The production process for the new caps will result in an overall reduction in greenhouse gas emissions when compared with the traditional process for manufacturing polyethylene. These are in use in Europe and Brazil, and soon a yet-to-be named U.S. company will be using them, according to Tetra Pak.

More recently, Tetra Pak announced a pilot in Brazil for the use of bio-based low-density polyethylene LDPE in the actual packaging material.

The planned move to bio-based LDPE means that 100% of Tetra Pak packages produced in Brazil, about 13 billion, will have up to 82% packaging material from renewable sources.

The bio-based caps and plastic represent another step towards Tetra Pak’s ambition to offer packaging made entirely from renewable materials.

“In this economic environment, companies are looking for ways to grab the interest of environmentally conscious consumers and many succeed by embracing sustainable packaging solutions,” Muratoglu said.

At the same time, consumers increasingly demand environmental information on products, according to a Tetra Pak 2013 study, conducted in partnership with Firefly Millard Brown. The survey polled over 7,000 consumers and more than 200 food industry stakeholders in a total of 13 countries.

“As consumers expand their knowledge on issues pertaining to sustainability, there is a growing sense of responsibility when it comes to their purchases,” said Muratoglu. “In addition, consumers increasingly believe that businesses should take responsibility in environmental issues and reduce their impact on the environment.”

The majority (59%) of eco-aware moms say they’ve switched brands on the basis of packaging.

• 72%: “It’s important to buy food and  beverages that are packaged responsibly.”