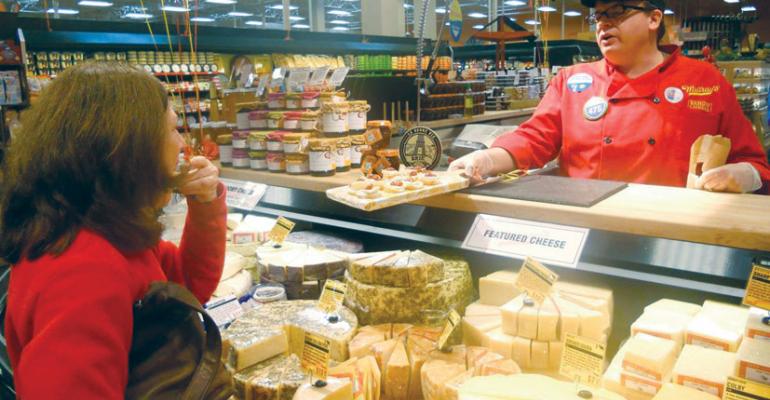 Proving that supermarket customers are looking for more sophisticated options than the usual cheeses found in the dairy aisle, Murray’s Cheese shops continue to expand within Kroger banner stores.

“We started out in 2008 a handful of stores here, a handful of stores there in various divisions, and now we’re in 11 states and our 100th store will be in Ralphs in their division out there in Los Angeles. It’s their Studio City (Calif.) store,” Deena Siegelbaum, marketing VP at the New York-based specialty cheese retailer, told SN.

Murray’s is accelerating store expansion, with about 60 new stores slated to open within Kroger banners in 2014.

“We have quite an ambitious year planned for Murray’s and Kroger.”

Murray’s will be celebrating its 100th store opening on Feb. 1, with every Murray’s location hosting a cheese-tasting party — with wine and beer tastings if state laws allow it.

“In Studio City, we’re going to be working with the Grilled Cheese Truck and they are going to be parked outside the Ralphs there from 11 a.m. to 3 p.m. And we’ll be giving away 100 free grilled-cheese sandwiches during that time,” Siegelbaum said.

Murray’s Manhattan Greenwich Village store will also be distributing free grilled cheeses to the first 100 customers and Murray’s will also have a $100 shopping spree give-away on Facebook.

Murray’s infuses its specialty cheese offerings in each location by reaching out to regional cheesemakers.

“We have the same base selection of certainly our European cheeses and some American standards and classics, but then in every division we’re scouring the farmers’ markets and calling on everyone we know to fill out the local cheese selection.”

The wide variety of California cheese has made it easy for Murray’s to offer “dozens” of options from the area.

Murray’s aims to keep its small-store feeling and quality even while it expands to more Kroger stores.

“So the first difference is they [cheesemongers] are receiving whole wheels of cheese that they are cutting and wrapping at the cheese counter. So you’re getting a much fresher product. It’s not like shrink-wrapped cheese that you’d see in a lot of supermarkets.”

The head cheesemonger at each of Murray’s stores are brought to New York for formal training on different cheese types, pairing, cutting, handling, serving and storing cheese, Siegelbaum said.

“If a customer comes in and they have any old question about why this cheddar or where is this from or can you tell me more about this, our cheesemongers are just as knowledgeable out in Dallas or in Seattle as they are in New York.”

This training program has been standardized more since Murray’s began working with Kroger.

Murray’s also sends trainers to the different locations. Those cheesemongers who complete the training and test are given a red jacket, and Siegelbaum said there are about a 1,000 red jackets now distributed across the country.

“It rivals our buying program for Kroger. The training is just as important as the cheese that we have in the store,” said Siegelbaum.

“Because we could have the best selection, but if we don’t have the best people, then we’re really not living up to what our company motto is, which is to bring the best cheese to America.”