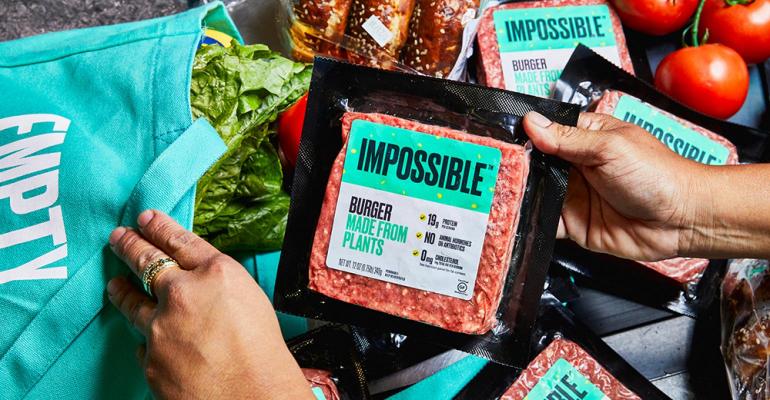 Impossible Foods
In the Home Chef meal kits, the Impossible Burger will come in a 12-ounce package of ground plant-based meat.
Product Categories>Deli

The Kroger Co.’s Home Chef meal-kit delivery subsidiary has partnered with plant-based food maker Impossible Foods to give customers the option to swap out animal-based proteins.

As part of a new feature called “Customize It,” Chicago-based Home Chef said late Tuesday that, each week, it will offer a selection of meal recipes in which customers can substitute the plant-based Impossible Burger for beef and other meat in meal kits. The Impossible Burger will come in a 12-ounce package of ground plant-based meat.

“With the launch of Impossible, we are providing our customers more ways to enjoy our weekly recipes and be on the forefront of the trend towards eating more plant-based foods,” Pat Vihtelic, founder and CEO of Home Chef, said in a statement.

Home Chef said its Customize It feature gives customers more flexibility by enabling them to swap, upgrade and double up on proteins, add protein to vegetarian meals, and choose how many servings of each recipe. The online service delivers more than 3.5 million meals delivered each month. 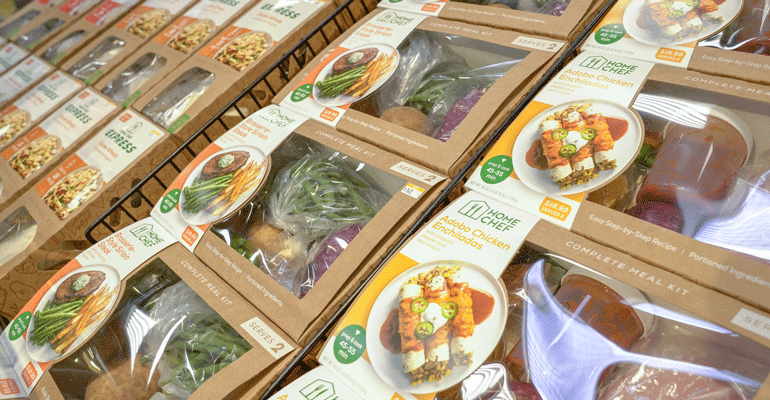 Kroger stepped up its rollout of Home Chef meal kits to stores last year after acquiring the company in mid-2018.

“We’ve long intended to make the Impossible Burger available anywhere that food is sold, including through meal kits,” commented Dan Greene, senior vice president of U.S. sales at Impossible Foods. “We’re thrilled to share that the Impossible Burger is now on the Home Chef menu, so that cooks everywhere can conveniently try out new recipes with our delicious meat made from plants.”

Yesterday, Impossible Foods reported that it has expanded its grocery store footprint by more than thirtyfold since the start of the coronavirus pandemic, and the company is on track to boost its retail availability by fiftyfold in 2020.

As of March, the Impossible Burger was sold in 150 grocery stores, but now the product is on shelves at more than 5,000 grocery stores in 48 continental U.S. states, including such supermarket banners as Kroger, Albertsons, Fred Meyer, Gelson’s Market, Safeway, Vons and Wegmans.

Plans call for the product to launch at more retailers over the summer, Impossible Foods said. The Impossible Burger made its retail debut in September 2019, at all 27 outlets of Gelson’s Markets in Southern California.

In 2019, the U.S. market for plant-based foods reached $5 billion, up 11.4% year over year, according to the Plant Based Foods Association (PBFA) and The Good Food Institute. Plant-based meat was the second-largest category and one of the fastest-growing segments, totaling sales of $939 million, up 18.4% from 2018.

Last week, PBFA and Kroger said a pilot program showed that sales of plant-based meat rose 23% when those products were merchandised in the conventional meat section.