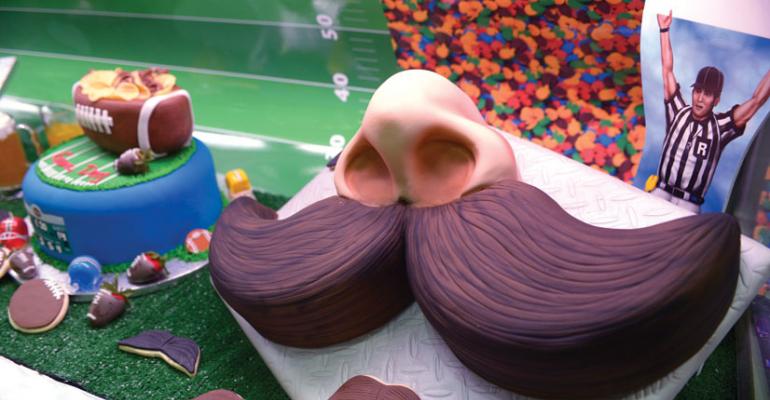 <p> The mustache cake was a big hit this year at IDDBA in Orlando, Fla.</p>
Product Categories>Deli

Make It New at Show & Sell

Whether it’s with a larger than life mustache cake or a deli case entirely filled with bacon snacks, the Show & Sell Center usually pushes the envelope.

Earlier this month the veteran group of suppliers and retailers came together at the International Dairy-Deli-Bakery Association’s show in Orlando, Fla., to create sample display cases to encourage retailers to mix up their merchandising and product mix. The team’s ideas ranged from small twists to bold centerpiece items.

In fact, one deli case showed that a little elbow grease can go a long way.

The team put chopped and cubed deli meats and cheeses in small clear containers that shoppers could purchase by weight.

Isabel Fischer, Coborn’s, said this presentation is a good way to prevent waste because retailers could use up all their meat or cheese ends in cubed pieces.

As reported last week by SN, a similar approach has been profitable for Whole Foods Market, which takes bruised produce and repackages it as value-added products. IDDBA CEO and President Carol Christison said this one activity accounts for 15% of the produce department sales.

Many of the Show & Sell displays melded the conference’s sports theme with convenient, value-added products.

By cutting a loaf of bread into squares and inserting cheese or bacon, the bakery team made “cracked bread” just as ready for preparing at home as a tailgate party.

“And you just pop it in your oven for a few minutes and melt it all in. So something they [shoppers] can do quick and easy, or they could take it right to the game and do it on their grill, and it would work the same [way],” said bakery team member Diana Buuck, Advantage Waypoint.

The deli team put a new spin on the most traditional ballpark food — hot dogs.

These hotdogs were piled high with unexpected ingredients, like olives or meatballs.

And, in a “Dude Food” display, the team wrapped hot dogs with cheese and bacon.

The male-themed case was heavy on the meat. An “amped up” mac and cheese included chicken, meatballs and sausage, “for a real dude’s mac and cheese,” Fischer said.

The deli team also put together a “snack stadium” thanks to the carpentry help of one team member’s husband, Jim Alm.

JoAnn Alm, Nash Finch Co., said that sports fans often create videos of themselves making these cracker and snack stadiums and post them on YouTube.

In these model stadiums, people place crackers and chips where the spectators would typically sit. This stadium even included miniature goal posts and artificial turf with painted yard lines.

On the bakery side, the Show & Sell displays used a combination of bold eye-catching items and new takes on traditional products.

For instance, it was hard to ignore the huge mustache cake, made to look like real hair, complete with an equally large nose. The bakery team members said they got a lot of questions about the mustache at the show.

With the popularity of fake kid mustaches and mustache-patterned products, why not a cake mustache?

The Show & Sell bakers even made mustache cake cookies, tying up clear boxes with ribbon and a small plastic mustache.

The team also worked to show the versatility of fondant. 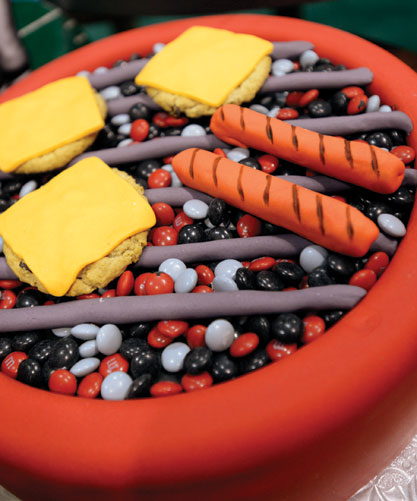 For the cupcakes, the team just rolled the fondant and cut out circles to top them. Julie Varner, Advantage Waypoint, added that the cupcake fondant was flavored, too.

In addition to transforming something as commonplace as a cupcake with fondant, the team also masked cakes to look like other food. A confectionery grill, complete with cookies for burgers and M&M’s for coals, surprised showgoers in a Home Plate Concessions display. Sweet faux hot dogs sat in doughnut buns.

“When you have seasonal items, go ahead and do a display like this,” Geiseman said.

For occasions that call for more of an elegant approach, the bakery team put together a black and white display. A simple cake with white sprinkles and a flower on top had a graceful appearance due to the color uniformity. 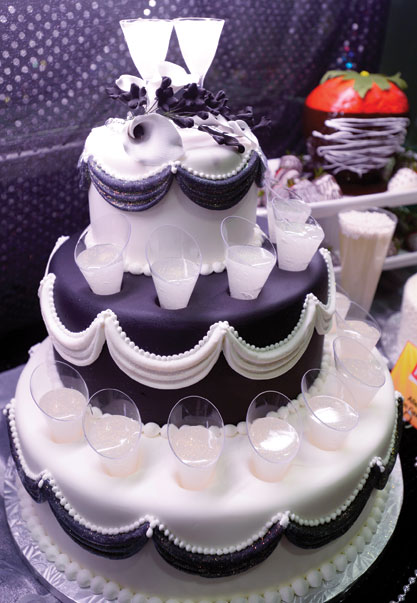 The cake champagne could be used for a special wedding party toast, Varner said, adding that the baking team has gotten a lot of questions about the cake.

In addition to inspiring shoppers with edible works of art, some of the displays aimed to give customers meal inspirations. One case was split between silver plates with example meals on top, and grab-and-go containers with the prepared food ingredients for the meal on the bottom.

“You come over here and you look at one of the  dinner plates, and you think I just need to buy this and this,” to make a meal, said Glenda Levsey, formerly of Tom Thumb stores.

This display would help customers visualize how the meals would look on their own tables at home. Chalkboard-style menu tags gave the meals an upscale touch.

Some of the Show & Sell Center displays zeroed in on popular trends that might attract shoppers. Take, for instance, the “Piggy Bites: You Had Me at Bacon” case. Here, everything had the common ingredient of bacon.

Although it was a lot of wrapping and molding, Bessie Dicks, Shoppers Food & Pharmacy, said she enjoyed getting creative with the bacon.

And bacon certainly was everywhere — wrapped around egg squares, bunched around asparagus, and woven into a lattice atop of baked brie.

“Still the trend is small bites where people can graze,” said food stylist Chris Koch, Cooking or Whatever.

For a pastoral touch, these bacon products were presented in cast-iron pans, surrounded by stacks of hay and fake pigs.

Show & Sell team members told SN that they wanted retailers to be able to take these ideas back to their stores.

“The main goal of this is to show people how to use the same product in multiple ways and how to merchandise their product,” said Buuck from the bakery team.