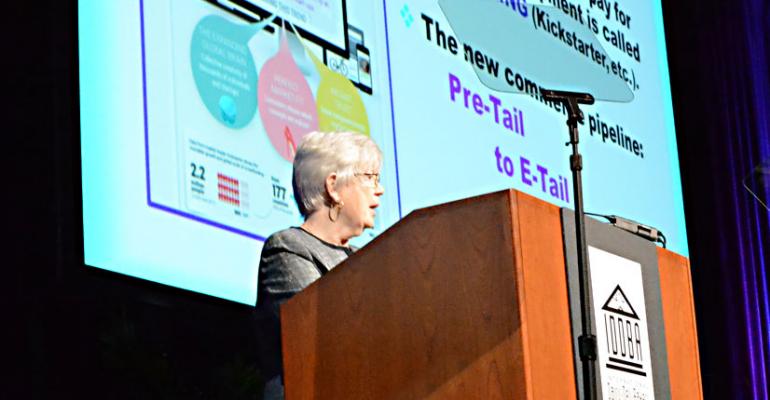 Christison, who just celebrated her 30th year leading IDDBA, noted how one retailer turned cutting waste into a source of income.

“It’s repurposing with a twist. We’ve discovered one great new way to upcycle from our friends at Whole Foods.”

The retailer takes bruised produce, and slices, cubes or trims them. Then, the remaining fruit is repackaged as value-added products.

“This one activity now accounts for 15% of total produce sales.”

Christison also pointed to a variety of new formats rolling out at retail, all mostly focusing on specialty or fresh products. Take VegCo Market, a 12,000-foot store that is expected to open in Phoenix complete with a deli, bakery, demo kitchen, classroom and indoor garden. The retailer plans to offer only plant-based, vegan foods, so there will be no meat, dairy or honey.

Another new limited-assortment format store, Harris Teeter’s 201 Central, has amenities such as a temperature controlled wine room, 190 different types of cigars, and cooking classes, according to Christison.

As for consumer trends, Christison cited a Harris Interactive study that showed fewer shoppers are loyal to particular brands.

“Lack of brand loyalty equates to lack of trust,” she said.

“Not only do consumers, particularly Millennials born between 1982 and 2004 want transparency, they want corporate conscience. They want businesses and companies to do the right thing and to help those less fortunate. This trend is becoming the new corporate currency.”

Because Millennials were “burned by the recession,” they are wary of consumerism, she said.

The rapidly changing influence of technology on retail and consumer behaviors was a reoccurring theme at the conference.

According to the Interactive Advertising Bureau & Viggle, 69% of consumers use a device to order food.

“Pizza is the most searched for item online, followed by burgers, then Chinese food,” Christison said.

There’s room for improvement on search engine optimization for retailer websites. Christison said when googling for “late-night food” no supermarkets appeared on the first search page. Her second search for “fresh prepared foods” only brought up one supermarket: Whole Foods.

While the amount of people who shop for groceries is small compared to those who shop for other products online, there are a few more people interested in participating.

Fifteen percent of adult shoppers have bought groceries online, but 19% plan to in the future, according to a Harris Interactive study, Christison said.

One company Christison thinks supermarkets should look out for is Amazon.com.

“Amazon started as a threat to booksellers, but really is enemy No. 1 to all retailers.”

The online giant might surpass Wal-Mart as the world’s largest retailer by 2017, she said, adding that the company “is also considering brick and mortar stores.”