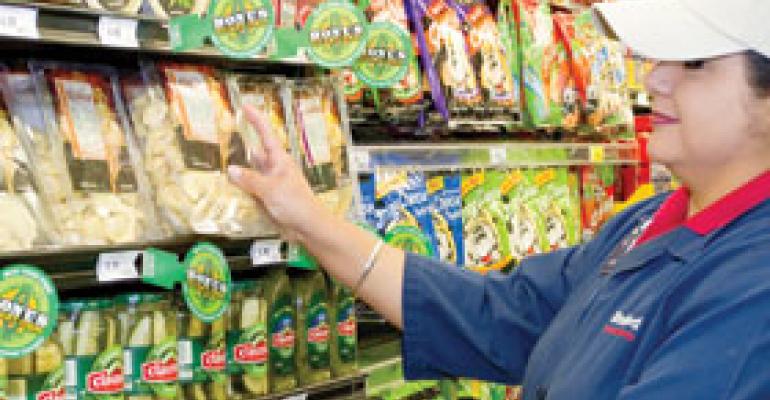 Retailers have warmed up to refrigerated pasta as gourmet flavors keep hitting the market, and sales continue to grow

Fresh, refrigerated pasta has shown itself to be a steady premium category, holding its own even through the worst of the recession, retailers told SN.

What's more, they're preparing for the category's future — a bright one, they say — by revamping and increasing display space, adding varieties and currying promotions.

“We consider it a part of making a quick meal so we have it in our short-cuts section where we have quick-to-fix things like refrigerated mashed potatoes and Hormel dinners,” said Scott Nettles, meat/seafood director for the 50-unit company.

Nettles said that at United, stuffed, refrigerated pasta is taking over the category. “That's where we saw the best growth — cheese-stuffed tortellini, spinach-cheese ravioli, ravioli with ricotta and asparagus, other stuffed varieties.”

Some supermarket retailers said sales of stuffed and straight-cut refrigerated pasta even out.

“They keep pace with one another. We sell a lot of linguini, fettuccini and angel hair,” said a deli manager at a New England independent.

For the 52 weeks ending May 14, 2011, dollar sales of refrigerated pasta were up 3.7%, while unit sales were up 2.2% compared with a year earlier, according to supermarket channel data from the Nielsen Co.

For all retail food outlets for the same period, including Wal-Mart, dollars sales are up 4.8% from a year ago, while unit sales are up 3.0%, according to Nielsen.

The current statistics were borne out by individual supermarket retailers who told SN their sales grew last year as well as each of the last four or five years. Single digits, yes, but consistently upward bound.

“Sales have increased steadily over the four years I've been here,” said Anne Hart, deli manager at three-unit Brigido's Fresh Market's Slatersville, R.I. store. “We had sales growth during the worst of the recession.”

Patti Rispoli, deli supervisor for 10-unit Super Foodtown/Food Circus, Middletown, N.J., agreed. So did other retailers. But they agreed that promotions and the size of the refrigerated pasta display have played major roles in sales success. And, in some cases, private label was an important sales driver as well. United Supermarkets had its biggest sales increases with its proprietary brand, World Classic Trading Co. — a Topco brand, Nettles said. Kowalski's Markets, St. Paul, Minn., too, led sales growth with its own brand.

With 61.4% dollar share, Nestlé USA's Buitoni brand continues to lead total category sales in the food, drug and mass channels, according to SymphonyIRI. When Buitoni's high-end, premium-brand Buitoni Riserva is added to that, the dollar share for Buitoni comes to 73.8%.

Some retailers, such as Kowalski's, who almost exclusively merchandise refrigerated pasta in their dairy departments, bank on their own brand to drive sales. Other retailers, who bring in some local, handmade pasta, merchandise the product in their deli and foodservice cases.

“Here, refrigerated pasta belongs to the deli department,” Foodtown's Rispoli told SN. “In some stores, we have displayed it in dairy as well, but we get the ring.” She added that nine of the chain's delis have it in their prepared-food-to-go case where it's paired with sauces, and, if there's space, a basket of Italian bread is placed in front of the case.

“We carry Buitoni in 9-ounce packs and a 20-ounce family pack. Buitoni also has a line of sauces.” Rispoli talked about another brand that is popular with her customers, Giovanni Rana, which has a menu of tantalizing flavors such as an artichoke tortellini and a tomato and mozzarella ravioli. Broccoli and cheese, too.

“They have some really interesting ones coming up also, like caramelized onion with goat cheese and eggplant parm in large ravioli,” Rispoli said. Giovanni Rana is currently imported from Italy, and retails for a premium price, but one source told SN that the company is looking to build a warehouse in this country to provide efficiency and become more competitive

The brand's website indicates the company is set for multi-national growth.

“In my market here in New Jersey, that brand has grown 1.6% in dollars and 2.5% in units since a year ago, but it's been promotion-driven,” Rispoli said, adding that suppliers and her company have been aggressive with the products.

“They do sampling demos, and every other week we run refrigerated pasta in our deli ad in the circular.”

Foodtown also deals with a couple of local companies. Those local products, as other retailers also told SN, must be turned quickly or put into the frozen case because the shelf life of unfrozen, small-batch refrigerated pasta is generally three days or less. That's compared to more than 30 days for refrigerated pastas that are shipped pre-packed in modified-atmosphere packaging.

“We have two freezer doors devoted to frozen, fresh pasta we get locally,” said Rispoli. “Those are very popular. The local company does seasonal items and people look for them. For instance, there's roasted pepper/pumpkin in the fall. They have 21 varieties.”

In two of its high-traffic stores in affluent areas, Foodtown carries a brand of fresh, handmade pasta that's known in the area because of the restaurant that features it in nearby Red Bank, N.J.

Wherever refrigerated pasta is displayed in a store, retailers agreed that it has to make a statement. Without critical mass, it will go unnoticed, they said. So the display is usually at least 4 feet wide with three or four shelves housing the product, whether it's in dairy, deli or the meat department.

At United Supermarkets, which carries refrigerated pasta in only about 20 of its high-end stores, Nettles makes sure the display is seen.

“We now devote 4 [multi-shelf] feet to it,” Nettles said. It needs to be that big or it gets lost. Previously, we had it on one shelf, with one row of sauces alongside and one row of pasta, but when we spread it out to 4 feet and more shelves, our sales of it more than doubled.”

Sales took another climb when United started putting two packs of refrigerated fettuccine, a pack of sauce, a pack of meatballs and shredded cheese all in one package that retails for $10. All the items in the pack bear the company's private-label brand.

“Those $10 packages are doing well. It's a convenience. Mom sees it as a meal,” Nettles said.

“The category is almost flat in units,” Nettles said, but he and others pointed out that pasta sales pick up when the weather cools down. But all will maintain the space they've devoted to the category through the summer. Kowalski's devotes about 4 feet of an 8-to-12 run in dairy to refrigerated pasta, but will bring a locally made, fresh brand into its deli come fall. Meanwhile, Brigido's has just finished redoing its refrigerated pasta display, making it bigger and more of a stand-out, Hart said.

“We carry eight varieties of Giovanni Rana and eight or nine in Buitoni. Buitoni's Riserva collection is great. It's high end and includes such varieties as spicy beef, wild mushroom and quattro formaggi in agnolotti — a crescent-shaped ravioli — and cheese with roasted garlic and cheese and sausage tortellini.”

Rispoli at Foodtown pointed out that tortellini keeps sales going in summer because people make salads out of it.

Rising food prices have made refrigerated pasta more appealing, even though it's sold at a higher retail than the dry variety in the grocery aisle. That may seem unexpected, but Mintel, a Chicago-based market research firm, noted in its latest pasta report that overall, pasta remains a great value.

“Some 57% of respondents who eat refrigerated/fresh pasta report taste as the leading reason they choose to eat this type of pasta as opposed to other pastas, with almost half saying speed [of cooking] is also a factor in the choice,” Mintel researchers wrote.

The new varieties — the interesting flavor combos in stuffed, fresh pasta — undoubtedly have a role in keeping refrigerated pasta sales up. Almost half of Mintel's respondents said they eat pasta frequently because of the interesting variety available. They said pasta is not boring. Fresh, refrigerated pasta is the smallest segment in the pasta category, but it's the fastest-growing segment, Mintel's report said.

It continues: “The increased demand for fresh foods has benefited fresh pasta sales because refrigerated foods are perceived as fresher than their shelf-stable or frozen counterparts, and with limited national suppliers, private label is emerging as an important segment player.”

One supermarket retailer puts it this way: “As more people eat out, they've come to know what they can do at home and what they can't,” said Brigido's Anne Hart.

When top quality, fresh pasta is so very accessible, shoppers realize an Italian meal in a good restaurant is one that's fairly easy to simulate at home, and they can save money doing it.