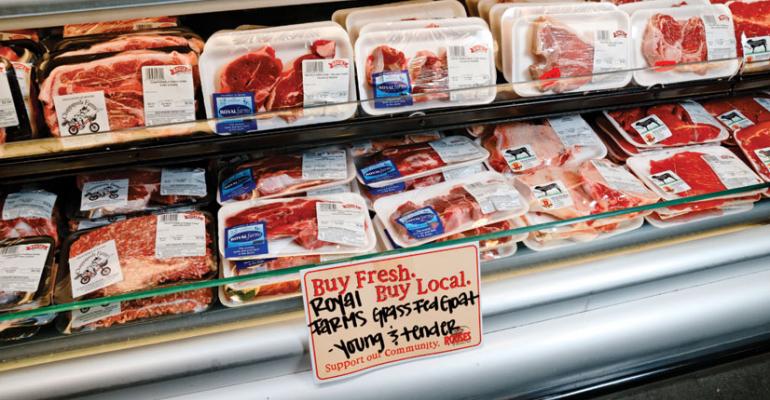 Meat Category Goes Into the Wild

From wild game to farm-raised buffalo, consumers and retailers are moving beyond beef, chicken and pork

Elk, pheasant, alligator — it may sound like the list of animals at the local zoo, but it’s actually inventory from the meat case at Dorothy Lane Market.

“And what was once wild game, today sometimes is mainstream,” said Jack Gridley, vice president of meat and seafood of the Dayton, Ohio-based, three-store independent.

Buffalo is so common that it’s no longer considered wild game, said Gridley, while farm-raised venison and wild boar sausage are everyday items.

Though Dorothy Lane is a more extreme example, the popularity of exotic and unusual meats represents a broader trend among consumers and retailers.

As consumers become more familiar with meats beyond beef, pork and chicken through restaurants and cooking shows, they are looking for them more often in supermarkets. Retailers that carry such items have become destinations for foodies, adventurous and health-conscious eaters, and certain ethnic groups that use those meats for traditional meals.

Buffalo is now a $38 million business at retail, according to Nielsen Perishables Group, and even more niche products like venison and lamb offals have experienced double-digit growth in the past year.

Frey said that sales growth of unusual meats at retail could also be attributed to the increase in such items on foodservice menus, as well as the country’s changing demographics.

“We did in this past year, from July of last year to June, about $27,000 worth, on the retail side,” said James Graham, meat and seafood manager.

BriarPatch sells several types of buffalo steaks, but ground buffalo is the most popular item.

Now that bison is more common, retailers said consumers purchase it because it is perceived as healthier than other proteins.

“Consumers like to see it in the cases. They’ll buy more ground than they will actual cuts. And I think that’s just because of a price point,” said Alan Hummel, director of meat and seafood, New Seasons Market, Portland, Ore.

Health considerations can also explain why some customers choose lamb at BriarPatch.

Though Rouses Markets, Thibodaux, La., had been selling lamb for some time, the retailer started selling goat and lamb from a local farm in May.

“But the goat actually surprised us because the consumers were very familiar with the product. And we’ve had several customers actually say that they haven’t had that since they were much younger. And that reminds them of the old days when they used to eat that product,” said James Breuhl, meat and seafood director.

The goat particularly appeals to certain groups of customers.

“It’s targeted towards the ethnic community. The Hispanic community is very familiar with goat. And also the Muslim community,” said Breuhl.

For both lamb and goat, Rouses sells a wide variety of cuts.

“We actually buy the entire animal. So we offer everything off of the animal, from the kidneys to the shanks to the racks to the entire leg. So every piece of the animal is utilized in the stores that sell it,” said Breuhl.

The local lamb and goat have proved extremely popular, and Rouses plans to expand the number of stores that carry those items.

“And we’ve actually increased some of the quantities that we’ve been bringing in because the demand has been there for us to bring more product into those locations. We have about 25 stores that are doing the program,” said Breuhl.

Those retailers that do sell lamb don’t find it so exotic.

“For me personally, I think I find it odd that lamb is an ‘unusual meat.’ Because it’s such a mainstay in our case. But I can tell you, I do go visit our competitors in the region, and it is amazing to me they have such little offering in lamb when we have such a large offering,” said Hummel.

“And we did find that the retailers who are winning at fresh, one of the things that we noticed across exotics and unique meats is that they are doing very well and they’re carrying a wide variety of selection and assortment for their customers,” said Frey.

New Seasons sells lamb year-round, but it is most popular at Christmas and Easter.

“I would say rack of lamb is probably a top five item for Christmas meals in our area, as far as meat,” said Hummel.

Lamb is also a popular holiday dish at Seattle-based PCC Natural Markets, while some customers enjoy the meat for its health benefits and versatility, according to Russ Ruby, director of merchandising.

“Lamb is still being prepared for special occasions but can also be part of a quick weekday meal. Also, for people who enjoy experimenting with new cuisines, lamb is often an interesting option,” said Ruby.

The retailer suggests several recipes for lamb with ethnic flavors on its website, such as Cuban-style chilindron of lamb, lamb gyro skewers with pistachios and mint, and lamb souvlaki.

Sales Pick Up in Autumn

In general, the colder months of the year seem to get consumers thinking about meats other than the traditional beef, chicken and pork.

“[Duck] does very well for us in the fall months and all throughout the winter, because a lot of people make duck gumbo and duck Andouille and things like that. But the duck overall has done very well,” said Rouses’ Breuhl, who noted that the duck is also local.

The same can be said of wild game at Dorothy Lane.

“You will see more of it in the fall, in the cool months, and Christmas, New Year’s,” said Gridley.

The meat department can also provide specialty items like bear, squab, rattlesnake — even beaver, although no one has requested it yet.

“If it’s available and you have a request we will try and source it and we will bring in whatever you want on a special order,” said Gridley.

When it comes to pricing for wild game at Dorothy Lane, elk is comparable to premium veal, while pheasant is more expensive than chicken.

Consumers with household incomes over $100,000 are most likely to purchase buffalo, duck and venison, while rabbit is popular both for households earning under $10,000 and those with incomes over $150,000.

“And then there’s products like ostrich which are really hitting right in the middle there of household incomes of $20,000 to $50,000,” said Frey.

Frey said it is important for retailers to know who is purchasing unusual meats and what else is in their basket to figure out how to best market such products.

Dorothy Lane has tried to popularize some of the more exotic items with cooking classes, such as a recent event with a New Zealand venison rancher.

In previous years, the “Cook Like a Wild Man” cooking series taught customers how to prepare elk, pheasant and wild boar.

Meat managers are invited to participate in the cooking classes so they can understand the meats and better serve customers.

“And people are very apprehensive about trying wild game. You prepare it, let them taste it, get them over the fear. If people were to try a farm-raised venison, it’s a much different product,” said Gridley.

“It’s from a foodie type to someone who’s just curious and looking for something different or novelty type occasion. There’s just multiple reasons people will buy wild game,” said Gridley.

Rouses began offering wild game such as rabbit, snake and boar about a year and a half ago, and now draws those customers looking to try new things into the store.

“We’ve actually built a destination point for those customers. The foodie customer really comes to us because they know they can get those exotic items from us, and they know if we don’t have them on display that we can order them and get them for them fairly quickly,” said Breuhl.