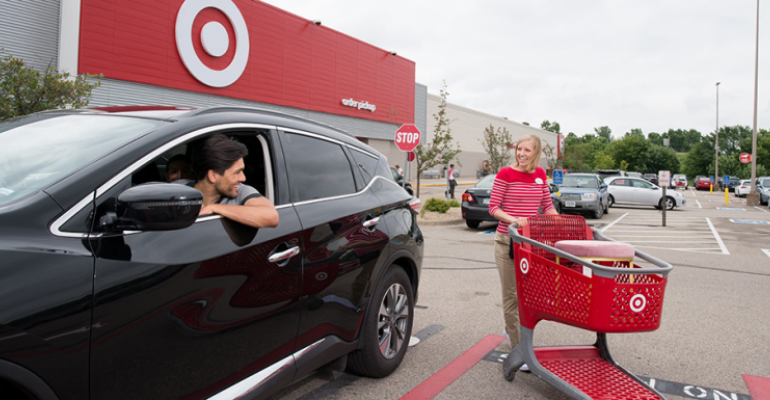 Target Corp. has extended its Drive Up curbside pickup service to more than 1,250 stores.

This week, the discount store chain said Drive Up launched at approximately 150 Target stores in Maryland, Virginia, Texas, Georgia, Florida and California. That followed an expansion to over 1,100 stores in early April.

“This expansion brings us one step closer to offering Drive Up at most Target stores by the end of the year,” Dawn Block, senior vice president of digital at Target, said in a statement. “It continues to be our fastest and top-rated same-day service, and we can’t wait for more guests to experience this added ease and convenience across the country.”

Drive Up, piloted in Minneapolis in October 2017, works as follows: Customers choose Drive Up as the fulfillment option when placing an order via the Target app, and then Target notifies them when the order is ready, typically within one to two hours. When ready to go to the store, customers click on the “I’m on the Way” button in the app. At the store, shoppers park in a designated Drive Up space, and within two minutes a Target associate brings their order to their car, where it’s loaded into the trunk or backseat.

Currently, more than 1,500 of Target’s 1,844 stores offer home delivery of groceries, daily essentials and other products through the company’s Shipt subsidiary. The Minneapolis-based retailer noted that Shipt’s expansion has driven the growth of Order Pickup, its free in-store pickup service now available in all stores.

According to a study released this week by Coresight Research, 15.7% of shoppers polled said they bought groceries online from Target in the past 12 months, up from 6.9% a year ago. That growth, based on census data, translates into an estimated 10 million gain in Target online grocery shoppers, or more than triple the number that the retailer had a year earlier.