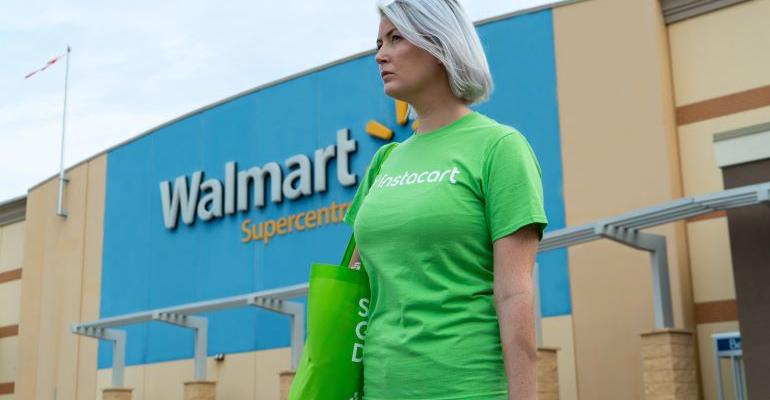 Walmart and Instacart said Thursday that the national launch builds on pilots of the on-demand service at 12 Walmart-banner stores in the Toronto area and five in Winnipeg that began last September, when the companies announced their partnership.

“Canadian families are busy. By introducing more online shopping options at Walmart, we’re helping make life easier and more convenient for them,” Lee Tappenden, president and CEO of Walmart Canada, said in a statement. “Expanding our relationship with Instacart provides our customers with even more time-saving ways to shop at Walmart in their community.”

To use the Instacart service, Walmart Canada customers download the Instacart app or go online to Instacart.ca to find their local Walmart store and place their order. Instacart personal shoppers pick, pack and deliver the items to customers’ doors in the designated time frame, including in one hour  or scheduled up to five days in advance.

In support of the launch, Walmart Canada and Instacart are offering first-time customers $10 off their first order of $35 or more when they enter the code “WMTCOAST2COAST” at checkout.

“Since we launched in Canada in November 2017, Instacart has grown to reach over 70% of Canadian households, up from 60% at the start of 2019. Last year, we saw triple-digit growth in terms of grocery delivery volume across North America, and we’ve also grown our Instacart Express membership by more than 150% year-over-year, every year since our founding in 2012," said Nilam Ganenthiran, chief business officer for Instacart. "Our partnership with Walmart Canada is a great milestone, and we’re excited about how our business continues to scale."

Walmart noted that the Instacart delivery rollout marks its latest expansion of online grocery access in Canada, including its own services and those provided by other third-party partners.

Walmart Canada currently offers grocery pickup at 175 stores — slated to expand to 190 by the end of January — as well as at nine urban PenguinPickUp locations in greater Toronto. Customers also can get next-day delivery anywhere in the Toronto area by ordering through Walmart.ca. For general merchandise, shoppers can order online via Walmart.ca for home delivery or in-store pickup.

In late October, Walmart Canada had expanded its online grocery pickup service to 22 more stores, including the first locations in Atlantic Canada, and made its Mobile Check-In service available at those locations. And early this year, the retailer introduced Pickup Towers in the Canadian market through pilots at stores in Oakville and Mississauga, Ontario. Walmart said it plans to bring the check-in feature to all Walmart Canada grocery pickup stores in 2019.

Walmart Canada is Instacart’s second Canadian retail grocery partner. In the fall of 2017, Instacart launched delivery with Loblaw Cos., and its service is available in 250 Loblaw stores across Canada.

San Francisco-based Instacart, too, has gone outside the grocery category in Canada. In April, it partnered with Staples Canada to pilot same-day delivery to customers at five Staples stores in greater Toronto.

With the Walmart Canada national rollout, Instacart now partners with over 300 retailers in North America, providing delivery from more than 20,000 stores in 5,500-plus cities. The service reaches more than 80% of U.S. households.

"Instacart today has five retail partners in Canada with over 500 store locations, including Walmart Canada, Loblaw (12 of their banners), M&M Food Market, Pusateri’s and Staples. We’ve launched or expanded with the majority of these partners in Canada over the course of the last year," Ganenthiran said. "In addition to this national expansion with Walmart Canada, we launched with Loblaw’s Shoppers Drug Mart across Ontario in June, launched with specialty retailer M&M Food Market in May, and kicked off our Toronto pilot with Staples in April, followed by an expansion to the entire greater Toronto area  in June. We have additional national expansions and new retailers launching in Canada this fall and look forward to sharing more on that soon."