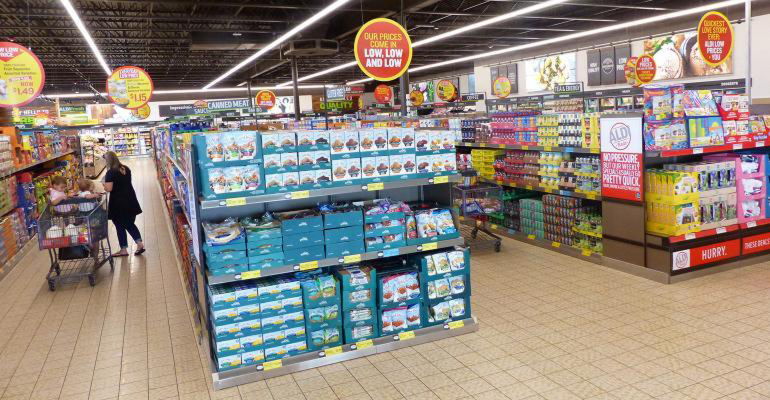 In 2018, the mass retail channel topped supermarkets for the first time in annual private label dollar sales volume in food and nonfood consumables, as well as in dollar and unit market share, according to data from the Private Label Manufacturers Association (PLMA) and Nielsen. 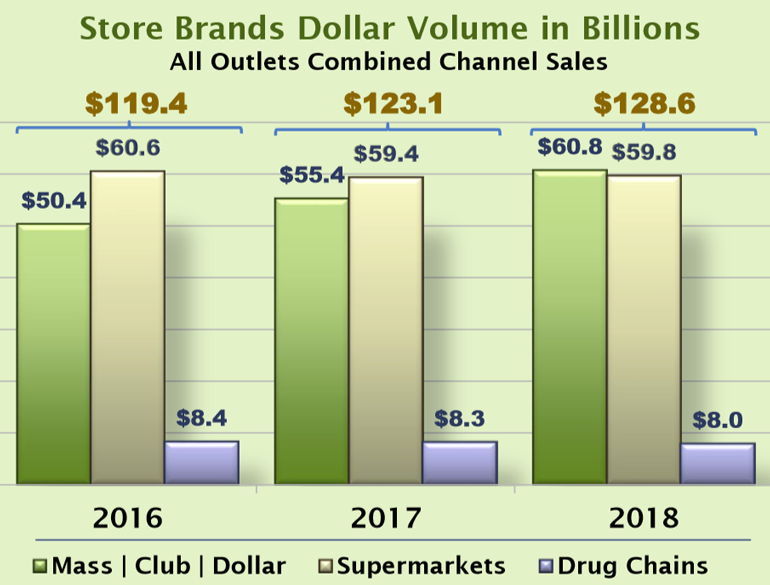 PLMA noted that the mass channel eclipsed supermarkets because of surging store-brand volume over the past five years. In dollars, private label sales for mass retailers swelled 41% to $60.8 billion in 2018 from $43.1 billion in 2013. Unit sales for private brands climbed 33.2% to 19.9 billion last year from 15 billion in 2013. 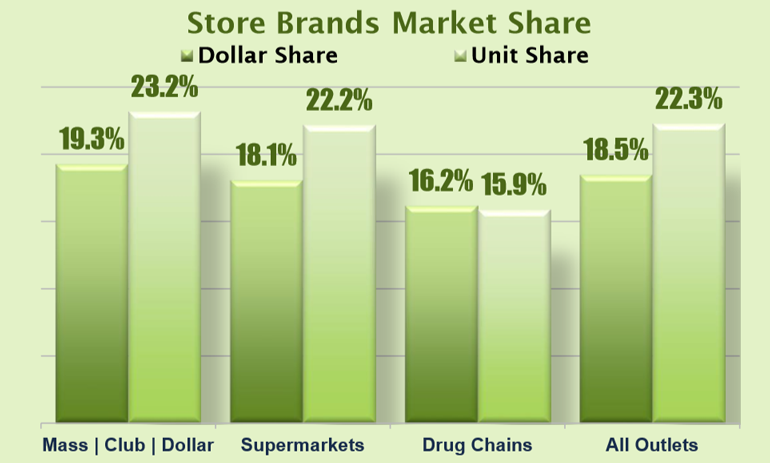 “The gains in both dollar and unit volume sales continue to drive significant market share increases for retailer brands in the mass channel,” PLMA said in the 2019 Yearbook. “Unit market share climbed to 23.2% last year from 18.5% in 2013. Meanwhile, dollar market share advanced to 19.3% from 15.5% in 2013.”

For supermarkets, private label dollar and unit consumables sales have declined for the past three years, save for a blip in dollar volume last year, according to PLMA/Nielsen data.

“The statistics for 2018 show it was another challenging year for supermarkets as a whole and for brands in the channel across the board,” PLMA observed. “Both store brands and national brands saw only nominal increases in sales volume.”

“As with last year, the most likely explanation is that a large number of supermarket sales are migrating to the fast-growing mass channel as well as to online operators, among other emerging and non-traditional competitors. But the 2018 results may be an indication that the channel’s losses are slowing,” PLMA explained in its report. “Market shares held nominally even at 18.1% in dollars and 22.2% in units for store brands, as annual sales volume came to $59.8 billion on the strength of 24.7 billion units sold for the year. Store brands still account for almost one of every four products sold annually in the vast supermarket channel.”

“Results among individual departments were mixed, with store-brand market shares in terms of both dollars and units increasing in three departments, decreasing in six and even in two,” PLMA said of supermarkets. “In the fresh meat department, store brands picked up 1.6 percentage points dollar market share, and fresh produce added 1.1 points. Taken as a group, dollar share slipped 0.2 points across the combined departments in food, while the combined nonfoods sections were unchanged. But the dry grocery department, which equates to half of all nonfood sales for the supermarket channel, gave up 0.3 points in store-brand dollar share.”

“With total sales gains of $5.5 billion, store brands accounted for virtually half of all sales growth that was recorded in the major U.S. retail channels,” PLMA noted, adding that the $128.6 billion figure was the highest annual dollar sales total on record. “The all-outlets improvement was driven almost entirely by a $5.4 billion sales increase for store brands in the mass channel.”