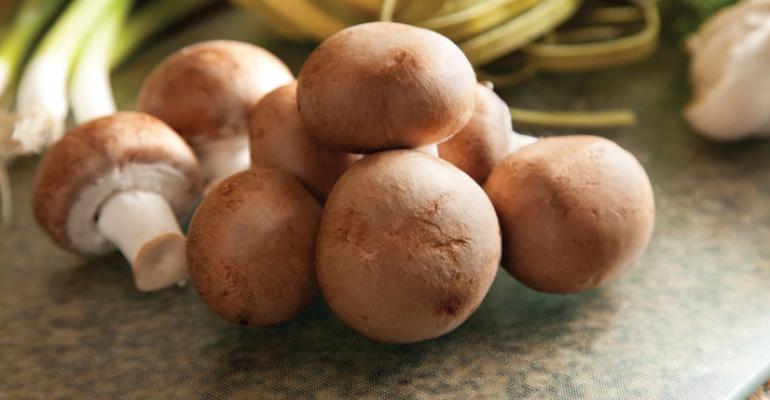 <p> &ldquo;So as consumers are being more adventurous and looking for more engaging flavor, in our category they&rsquo;re finding that in the brown mushrooms,&rdquo; says Mike Stephan, director of sales at Monterey Mushrooms.</p>

Brown Mushrooms Rise to the Top

Consumers&rsquo; increasing appetite for brown mushrooms like creminis and portabellas is leading steady growth in the mushroom category

When it comes to mushrooms, it’s not all about white buttons anymore.

“In the past six years, I’ve noticed that the cremini mushrooms [have] become a lot more popular. I think people were buying more white button but then they’re buying more cremini now. They really like them. I think there’s more awareness,” said Soren Huber, produce buyer at MOM’s Organic Market, a 10-store natural grocer based in Rockville, Md.

As consumers expand their palates and look for more flavorful and healthful foods, they are increasingly turning to brown mushrooms such as creminis and portabellas.

Dollar sales of brown mushrooms at retail grew 13.8% in the 52 weeks ending March 24, compared to 3.4% for all mushrooms, according to the Mushroom Council, a San Jose, Calif.-based marketing group.

In particular, creminis — which account for nearly three quarters of brown mushroom sales — are driving the growth, with a 12% increase in the past year. Portabellas also saw sales rise 19% for that time period.

“So as consumers are being more adventurous and looking for more engaging flavor, in our category they’re finding that in the brown mushrooms, be it baby bellas or portabellas,” said Mike Stephan, director of sales at Monterey Mushrooms, Watsonville, Calif. “Another comparison would be our white mushrooms are like iceberg lettuce and our browns are like leafy spinaches and romaines.”

The trend isn’t confined to natural retailers. Giant-Carlisle, whose headquarters are located near Kennett Square, Pa. — the “Mushroom Capital of the World” — has seen its customers shift towards brown varieties.

“There’s certain mushrooms that are staples, white mushrooms being one, but portabellas are starting to almost catch up with the white mushroom as well,” said spokesperson Christopher Brand.

Some of the surge in brown mushrooms’ popularity can be attributed to their increasing appearance on restaurant menus.

“Years ago, the brown mushroom was almost marketed and packaged as an exotic, which might have limited their exposure to the masses, to the general population. But brown mushrooms are a deliverable for a lot of mainstream, fast food, casual dining operators,” said Stephan.

For example, Stephan noted that Papa John’s and Ruby Tuesdays exclusively use brown mushrooms in their restaurants.

MOM’s customers like to grill portabellas — especially the tops.

“And I think it’s a grilling item and it’s kind of become standard whereas before, I don’t know, maybe even 10 years ago people didn’t know much about them,” said Huber.

“They’ll often take off the stems of the portabella and leave them behind on the table,” she added. MOM’s sells the majority of its mushrooms as bulk.

The retailer plans to run a portabella promotion this summer.

“We’ll put them on sale, bring extra in, make the display a little bigger. Probably have a recipe with them. Maybe even a little blurb about the farm they’re coming from,” said Huber.

Beyond browns and whites, customers have started buying more specialty mushrooms, such as shitakes, maitakes, pom poms and trumpets.

“And we’ve also seen a huge a growth in those, not as dramatic as the browns and creminis. But I would again just go back to seeing it in the press, seeing it in restaurants and at food shows. People are more confident in the kitchen and are willing to try more things and see it in their grocery store and take it home,” said Katie Preis, marketing coordinator at the Mushroom Council.

Retail sales of specialty mushrooms jumped 31% in the 52 weeks ending March 24, according the Mushroom Council, but they still represent a very small segment of the mushroom category.

“We have a niche clientele. Some people ask for maitakes, we bring them in, and one person buys them, or stuff like that,” said Kyle Franke, local produce buyer.

“And people want shitake for medicinal purposes. Like some people come in and just buy handfuls of them. So they don’t sell all that quickly, but then all of a sudden they’ll disappear. Because one customer comes in and wipes them out,” added Huber.

Giant-Carlisle sees increased awareness when it comes to specialty mushrooms.

“Also we’re finding that a lot of mushrooms, the unique ones, the pom poms and others like that, are showing up on cooking shows. And so oftentimes the cooking shows will drive some demand in mushroom categories that maybe we weren’t looking for,” said Brand.

Whether white, brown or something more exotic, the overall growth of the category is a matter of mushrooms being in the right place at the right time, Preis said.

“Mushrooms are so versatile and the nutrition message is so strong and the health movement is so strong with the consumer right now. So really just playing off of that, the versatility and the nutritional benefits. Consumers are just more and more aware of that, and we feel that’s really driving the demand of mushrooms,” said Preis.

The seemingly infinite uses for mushrooms are a strong factor in their popularity, industry sources said.

“So mushrooms, unlike most other items, are very versatile. Not only can they play in every day part — breakfast, lunch, dinner, appetizers — but they also are appropriate in almost any cuisine,” said Stephan, be it Mexican, Italian, Asian or American.

In terms of day parts, Brand said mushrooms can go in an omelet at breakfast, on a salad at lunch, and in a cacciatore sauce at dinner.

“They’re so versatile that they’re used throughout the day. And then of course if you just want to have a veggie platter, no one’s going to have that out without having the mushrooms there for dipping and that kind of thing,” said Brand.

He added there aren’t many foods that are so ubiquitous.

“But mushrooms are a special category because they are so versatile.”

Sidebar: Pack It In

Even as retail mushroom sales have gone up, the price per pound for most types has decreased slightly, according to data from the Mushroom Council, a San Jose, Calif.-based marketing group.

However, it’s not that the price of mushrooms has dropped — consumers are simply buying mushrooms in larger amounts.

“A general trend that we’re seeing is consumers that like mushrooms love them. And so they’re finding value in mushrooms in buying larger packages,” said Mike Stephan, director of sales at Monterey Mushrooms, Watsonville, Calif.

“Instead of buying six-packs they’re buying cases, if I were to compare that to the beer guy.”

Much like they’ve done with berries, Stephan said retailers are now selling and promoting larger pack sizes for mushrooms.

Giant-Carlisle has seen the trend among consumers who shop at its stores.

“Our customers are enjoying our value packs of mushrooms, which is helping with the growth” of the category, said spokesperson Christopher Brand.

He added that Giant customers often take advantage of a recurring special offer to purchase two 8-ounce mushroom packages for $5.

Giant also sells 14-ounce and 16-ounce packages of certain types of mushrooms, and white, cremini and portabella varieties can be bought as bulk.