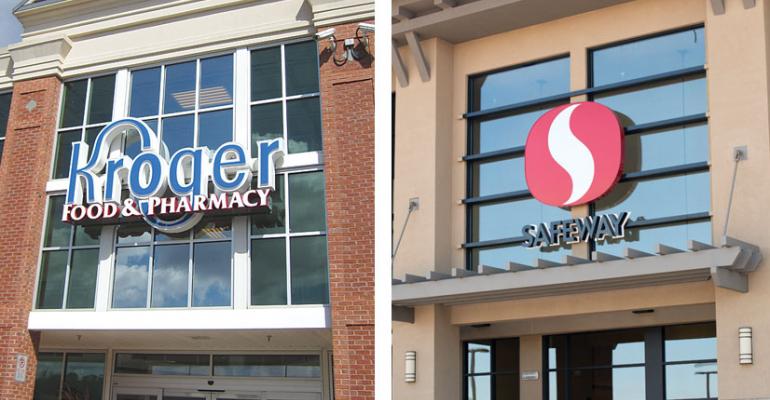 <p> &ldquo;Supervalu will become a smaller company, either through a total or partial break-up, which will leave the industry with a &lsquo;Big Two&rsquo;&rdquo; &mdash; Kroger and Safeway, says Andrew Wolf, an at BB&amp;T Capital Markets.</p>

Kroger Co. and Safeway will realize gains in sales volume through the downsizing of Supervalu in 2013, said Andrew Wolf, a Richmond, Va.-based analyst at BB&T Capital Markets.

Wolf — who correctly predicted at SN’s 2012 Analyst Roundtable that U.K.-based Tesco would pull the plug on its Fresh & Easy chain in the U.S. — said the traditional supermarket channel will evolve to more closely resemble the discount and drug store channels, where two large chains dominate the landscape.

“Supervalu will become a smaller company, either through a total or partial break-up, which will leave the industry with a ‘Big Two,’” he said. “That is analogous to the discount industry, where there’s Wal-Mart and Target, and Kmart is considered more or less an afterthought.”

The shift “should positively reinforce recently improving volume metrics for both Kroger and Safeway,” Wolf said.

Although Safeway’s sales gains have been inconsistent in recent quarters — unlike the steady drumbeat of positive gains at Kroger — Wolf said Safeway appears poised to break out.

“It appears that internal initiatives and the macro environment are converging such that Safeway now has a realistic likelihood of generating profitable sales growth during the current leg of the economic cycle,” Wolf said in a recent report.

One caveat, he noted, is that potentially excessive cost inflation in 2013 — above 4% across packed goods — could mitigate some of those expected volume gains as customers shift channels and otherwise cut back on traditional supermarket purchases.

After several years of sales declines and market-share losses, Minneapolis-based Supervalu said in July that it had launched a strategic review (see Page 1), which is expected to result in the sale of all or parts of the company.

Wolf said he doesn’t expect Pleasanton, Calif.-based Safeway to be a buyer for any parts of Supervalu — unless it picks up some individual store locations in the Pacific Northwest — but Kroger could end up making a bid for Supervalu’s Jewel-Osco chain in Chicago.

“I think Kroger has to seriously look at Jewel, especially if Supervalu is broken up,” Wolf said. “It’s a once-in-a-lifetime opportunity to buy Jewel, which has superb geographic fit for Kroger. They would have to make sure the numbers work according to their very tightly defined return metrics, but that would be the most likely strategic move either [Safeway or Kroger] is likely to make.”