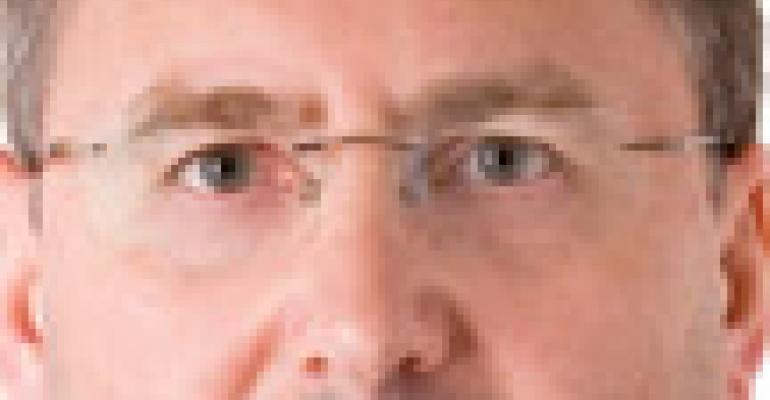 CHESHUNT, England Philip Clarke is bullish on Fresh & Easy Neighborhood Market. The incoming chairman and chief executive officer of Tesco, who will take over the company from Sir Terry Leahy in March, had expressed some doubts last year about the U.S. operation in media interviews after his promotion was announced. But he was fully on board by the time Tesco released first-half results in October.

The incoming chairman and chief executive officer of Tesco, who will take over the company from Sir Terry Leahy in March, had expressed some doubts last year about the U.S. operation in media interviews after his promotion was announced.

But he was fully on board by the time Tesco released first-half results in October.

“With the key components coming together, our plan to accelerate expansion of Fresh & Easy is right. The economy should help, but even if it doesn't, we have a good plan to get to profitability by 2012 or 2013, with our distribution center [in Riverside Calif.] operating at full capacity.”

Those upbeat remarks were in stark contrast to comments from Clarke quoted two weeks earlier by the Financial Times of London, in which he said he wanted to see the U.S. operation “up close and personal” before making up his mind about its future.

“I need the chance to go and look,” he said. “I look at the plans [for Fresh & Easy], and the plans are persuasive. But there is a big shift required if we are not to get to your doomsday scenario and a billion [pounds] of accumulated losses. Now the plan doesn't say that, so deliver the plan.”

Clarke's more positive comments a few days later seemed to indicate the U.S. venture has his full support. In fact, the promotion of Tim Mason — who heads the Fresh & Easy operation — to deputy CEO of Tesco seemed to support the company's strong commitment to its U.S. venture, David Gray, a retail analyst with Planet Retail, London, noted.

With Mason's promotion, he said, “Tesco looks more committed than ever to make its U.S. venture a success.”

Tesco operates 156 Fresh & Easy stores in Southern California, Arizona and Nevada, with three more due to open this week and its first Northern California store scheduled to open early next month. The U.S. operation experienced a loss of $248 million last year, following a loss of $214 million in 2009, and lost $151 million for the first half of fiscal 2011, which ended Aug. 31.

The company said in October the losses have plateaued, “although we do not expect this year's losses [for the year ending Feb. 28] to be materially different from last year.”

According to Gray, Tesco's distribution capabilities in the U.S. suggest Fresh & Easy could turn a profit once it's operating between 450 and 500 stores.

“Tesco has the cash to sit it out, considering the long-term prospects,” Gray said, “although the next couple of years will be a real test as the effects of the recession begin to fade and normal shopping patterns resume.”

Gray said Clarke has been a spark plug at Tesco for international growth — helping the company move into China, South Korea and India — and for information technology, overseeing the standardization of systems across Tesco's international operations.

“Under Clarke we can expect a continued focus on new technology in a never-ending drive to improve efficiencies and customer experience across the company's wide array of markets and formats,” Gray said. “We can also expect Tesco to carefully balance best practice across the countries in which it operates and adapt to differing local tastes and requirements.”

Gray also theorized that Clarke could lead Tesco's U.S. operations into an acquisition — possibly involving some stores operated by fellow Europeans Delhaize or Ahold, both of which are in the midst of massive cost-reduction programs, that could lead them “[to] sell up in the States to focus on their core markets on the Continent.”

Gavin Rothwell, research manager for IGD, a London-based international food and grocery analysis firm, said Clarke's focus since 2004 has been on building Tesco's international business, during which the chain's sales base outside England tripled.

“He has also overseen successful trading through tough economic conditions, particularly in Hungary and Thailand — experience that will clearly help in the U.S.,” Rothwell said.

“While driving domestic growth in the hugely competitive United Kingdom market will certainly be a challenge, particularly in a tough economic climate, maintaining international growth will remain a key priority for Tesco” under Clarke's leadership, he added, “though its fast-expanding services divisions and other initiatives, such as mall development in China, means there are many competing areas for investment.

“But Philip Clarke's track record of growth — and his ability to pick winning growth opportunities for the business — promises to stand him in good stead in his new role,” Rothwell said.