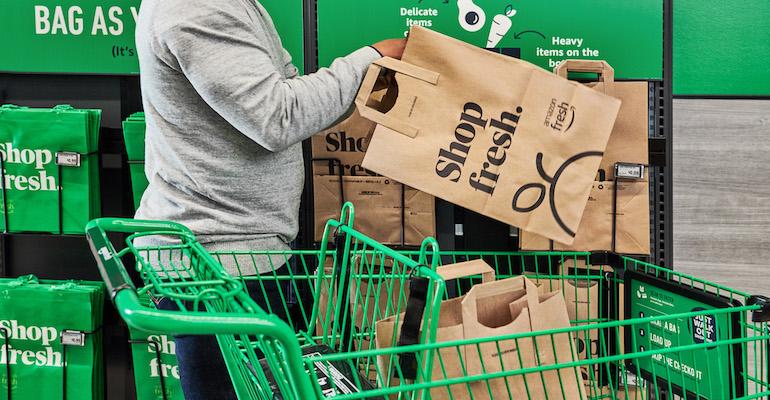 Amazon
Next week, Amazon plans to open its 30th Amazon Fresh supermarket. The brick-and-mortar grocery banner made its debut in August 2020.
News>Retail & Financial

Amazon started off its 2022 fiscal year with a sales upswing in the first quarter, as strong growth in its services businesses and a double-digit gain by its brick-and-mortar stores overcame a dip in core online retail sales.

At the bottom line, the e-tail giant posted a quarterly net loss of nearly $4 billion, due to an investment valuation loss of more than $7 billion.

For the quarter ended March 31, net sales rose 7.3% to $116.44 billion from $108.52 billion a year earlier, Seattle-based Amazon reported yesterday after the market close. Excluding the impact of changes in foreign exchange rates, overall sales were up 9% year over year.

Amazon’s physical-store sales, which include Whole Foods Market, grew 17.1% (about 16% excluding FX) to $4.59 billion in the first quarter from $3.92 billion in the prior-year period. The increase built on year-over-year gains of 16.6% in the 2021 fourth quarter, 13% in the third quarter and 11% in the second quarter, which came after a 15.5% decrease in the 2021 first quarter. On a sequential basis, physical-store sales declined nearly 2.1% in the 2022 first quarter following three straight quarter-to-quarter increases. 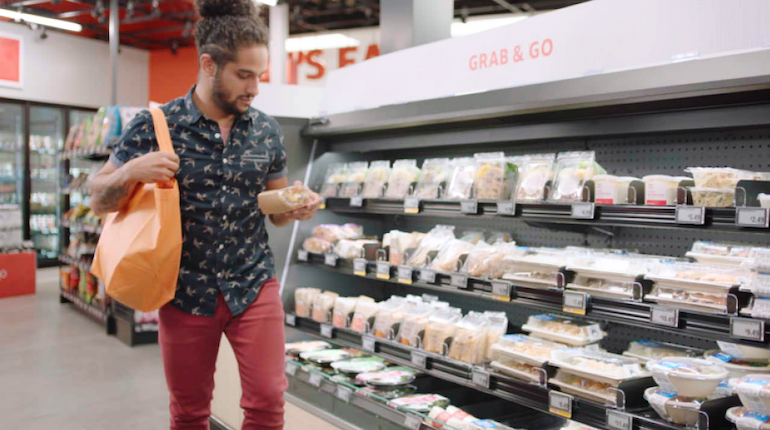 In early March, Amazon said it plans to close all of its bookstores, pop-up retail sites and shops carrying toys and home goods in the U.S. and United Kingdom. When the company reported fourth-quarter 2021 results in early February, those U.S. locations included 24 Amazon Books stores, 33 Amazon 4-Star outlets and nine Amazon Pop-Up locations.

Amazon, meanwhile, has continued to expand its other brick-and-mortar banners. The company said it opened eight new Amazon Fresh grocery stores in the first quarter and now has 46 overall in the U.S. and U.K. This week, a new, larger Amazon Go store format for suburban areas opened in Mill Creek, Wash., featuring more prepared foods and Just Walk Out technology that allows customers to skip the checkout line. Amazon plans to expand the bigger Go format to the Los Angeles area in the coming months. 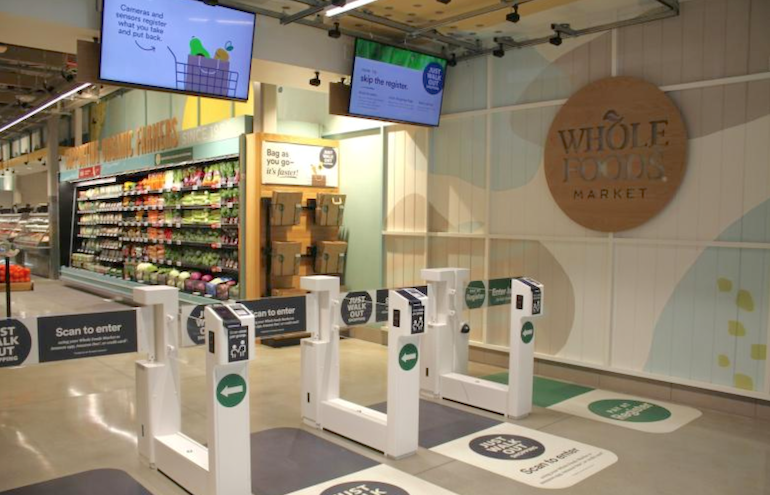 Amazon has brought Just Walk Out cashierless technology to two Whole Foods Market stores, in the District of Columbia and Sherman Oaks, Calif. (shown above).

The first quarter also saw Amazon introduce Just Walk Out cashierless checkout at Whole Foods stores in Washington, D.C., and Sherman Oaks, Calif. Amazon noted that Just Walk Out is being rolled out to more third-party locations as well, including travel retailer WHSmith in LaGuardia Airport in New York City; UBS Arena in Long Island, N.Y.; and Minute Maid Park in Houston. The company added that a food and beverage store with Just Walk Out and Amazon One palm-scanning ID technology is slated to open soon at T-Mobile Park in Seattle.

“Over the past few months, Amazon has made significant investments in retail innovations designed to reduce customer friction, such as Just Walk Out Technologies, which they are licensing to third-party retailers,” Deren Baker, CEO of e-commerce intelligence firm Edge by Ascential, said in an email. “Retail-as-a-service is the next big market opportunity for Amazon. With increasing labor and operational costs throughout the retail sector, Amazon is well-positioned to offer its tech and logistics infrastructure to third parties.”

In January, Amazon also announced plans to open its first-ever physical apparel store, dubbed Amazon Style. The first location is due to open later this year at The Americana at Brand, a shopping, dining, entertainment and residential development in Glendale, Calif. 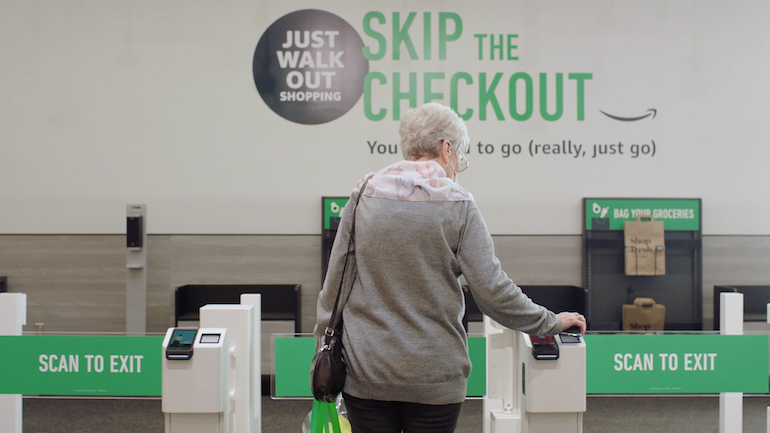 Among Amazon’s other business units, sales climbed 7% in third-party seller services, 37% in Amazon Web Services (AWS), 23% in advertising services, 11% in subscription services and 26% in other services for the first quarter.

“Worldwide net sales in Q1 were $116.4 billion, an increase of 9% year over year, excluding the impact of foreign exchange. This is at the top end of our guidance range of $112 billion to $117 billion. Our compound annual growth since before the pandemic stands at 25%, a growth rate higher than what we were seeing before the pandemic,” Amazon Chief Financial Officer Brian Olsavsky told analysts in a conference call late Thursday.

“Our Prime members continue be a key driver of growth. Prime members have meaningfully increased their spend since the start of the pandemic, and we continue to see consistently high member renewal rates,” Olsavsky said. “We also added millions more new Prime members during the quarter. Throughout the past two years, we have seen stronger usage of Prime benefits by Prime members and a greater reliance on Amazon for their shopping and entertainment.”

On the earnings side, Amazon reported a fiscal 2022 first-quarter net loss of $3.84 billion, or $7.56 per diluted share, compared with net income of $8.11 billion, or $16.09 per diluted share, a year ago. The company noted that the loss includes a pretax valuation loss of $7.6 billion in non-operating expense from a common stock investment in Rivian Automotive. “You may remember that we had a $12 billion gain on Rivian in Q4,” Olsavsky said in the analyst call.

“The pandemic and subsequent war in Ukraine have brought unusual growth and challenges,” Amazon CEO Andy Jassy said in a statement. “With AWS growing 34% annually over the last two years, and 37% year-over-year in the first quarter, AWS has been integral in helping companies weather the pandemic and move more of their workloads into the cloud. Our Consumer business has grown 23% annually over the past two years, with extraordinary growth in 2020 of 39% year over year that necessitated doubling the size of our fulfillment network that we’d built over Amazon’s first 25 years — and doing so in just 24 months.”

Jassy noted that, going forward, Amazon aims to sharpen its focus on efficiency. “Today, as we’re no longer chasing physical or staffing capacity, our teams are squarely focused on improving productivity and cost efficiencies throughout our fulfillment network. We know how to do this and have done it before,” he explained. “This may take some time, particularly as we work through ongoing inflationary and supply chain pressures, but we see encouraging progress on a number of customer experience dimensions, including delivery speed performance, as we’re now approaching levels not seen since the months immediately preceding the pandemic in early 2020.”

Retailers of all stripes are grappling with the same issues, according to Edge by Ascential’s Baker. “Amazon has had a challenging quarter. However, the challenges that the company is facing are shared throughout the retail sector. Inflationary pressures and rising shipping and logistics costs put pressure on retailers and brands across the board,” he said. “Despite these challenges, data from Edge by Ascential show that e-commerce will continue to be the No. 1 driver of retail growth in the U.S. 2021-2026, growing by 14% worldwide in 2022.”